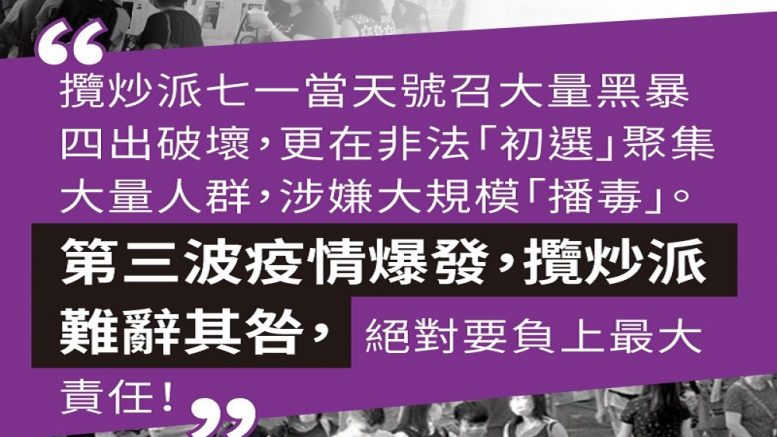 Election smearing is on! DAB puts the blame on the pan-democrats for the new wave of COVID-19 attack in Hong Kong.

With the next Legislative Council election about 50 days to go, the pro-Beijing force is gearing up for two battles. Not surprisingly, one is aimed to win the polls, or more precisely, as many seats as possible in the next legislature. The other, which sounds inconceivable from its outset, is to kill the September 6 election, or more accurately, to delay the vote.

On Monday, Tam Yiu-chung, the only Hong Kong deputy who sits on the National People’s Congress Standing Committee, China’s rubber-stamp parliament, urged the Government not to rule out the possibility of postponing the election. He cited the public health risk posed by the new wave of Covid-19 pandemic in the city as the reason for Plan B.

He is worried that there will be another fresh massive outbreak if and after the election is held, adding the Government should make preparations for a postponement of the election, including its legal ramifications.

Interestingly, Tam was speaking to reporters at an election rally for the political aspirants from the Democratic Alliance for the Betterment of Hong Kong, to which Tam belongs.

There were similar calls made by candidates from the DAB and their ally, Federation of Trade Unions.

Although both parties have stopped short of calling for a postponement at this stage, their preference of delaying the election is obvious. That they chose not to do so now is simply because it is not yet the time to do so.

First, the Covid-19 pandemic is still volatile. No one is able to tell how the crisis will develop in the next couple of weeks. And because of that, the Government will not make a decision one way or another on the September 6 election now.

But while running their election campaign as usual on the assumption that the election will go ahead as scheduled, the pro-Beijing force has stepped up campaign to create more noises in support of a postponement.

Silk Road Institute, a pro-Beijing think tank, has joined the call. The institute estimated that hundreds of thousands of Hong Kong voters are currently residing in the mainland. Due to the present restrictions on cross-border travel, they may not be able to return to Hong Kong to cast their votes. If that is the case, they argue the political rights of those Hong Kong voters will be deprived of and that the fairness of election will be damaged.

One estimate has put the number of Hong Kong voters who live in the mainland at about 200,000. Of them, about 70 to 80 percent are supporters of the pro-establishment camp.

With the political climate already highly unfavourable to them, the pro-Beijing camp will no doubt see it as another blow to them if the current travel restrictions across the border are still in place on or before the polling date.

Responding to the pro-establishment’s remarks on the election date, Tanya Chan, convenor of the Legco’s pan-democrat faction, is wise not to say definitively whether the election should or should not be held as planned.

Instead, she put pressure on the Government to give an account of the contingency plan, if any, of the election, including the deadline of a decision and a rescheduled date.

There is no doubt the pan-democrats will prefer the polls being held as fixed. But they have good reason not to give a yes-or-so answer at this stage because of the plain truth that how the pandemic unfolds is a toss-up. It will back-fire if they insist on the present date, only to find later the pandemic still poses a serious threat to the safety of people.

Instead of countering the pro-Beijing camp directly on the election date, the pan-democrats are right to put the ball onto the Government’s court. After all, they have the constitutional responsibility of constituting the new Legco through election as stipulated in the Basic Law.

Be the first to comment on "One election, two battles for pro-Beijing force"