Flashed back to January 28, 1984, late Chinese patriarch Deng Xiaoping was walking downhill after a hike near a guest house he stayed at during a visit in Zhongshan, Guangdong. The path was rugged. He was advised to return to the guest house from where he came from. He said no. “I’ve never turned back.” Deng’s vowing of “no-turn-back” （不走回頭路） had since then become a powerful slogan of his crusade for China’s reform and openness.

Almost 23 years after Deng went to see Marx, China under Xi Jinping saw increasing signs of the country “turning back”.

In a significant step to help lift the veil of secrecy of China in the 1980s following decades of political turmoil, Deng allowed international media to set up offices in Beijing to report the China story. Now, foreign journalists were shown the door.

Taking the most severe punitive action against foreign media since then, the Chinese Foreign Ministry on Thursday expelled 10 journalists from three American media outlets and banned them from working as a journalist in the mainland, Hong Kong and Macau.

The expulsion order was unprecedented in one significant aspect. It covered Hong Kong and Macau, the two Special Administrative Regions that are given highly-autonomous powers including immigration control under the “one country, two systems” political framework mastermined by Deng. Foreign Ministry spokesperson categorised their retaliation as “foreign affairs”, which falls outside the scope of Hong Kong’s autonomy.

In an open letter to Chief Executive Carrie Lam and Immigration Director Erick Tsang on Friday, the Foreign Correspondents’ Club in Hong Kong appealed for “clear and definitive answers” regarding Beijing’s expulsion decision. The FCC asks whether an expulsion from the mainland affects a journalist’s ability to enter Hong Kong even as a visitor, and whether journalists who already have the right to work in Hong Kong, through a visa or permanent residency, could have this right revoked or “superseded by a decision by Beijing.”

As this article was published, their specific questions were left unanswered by the Lam administration.

In an editorial published on March 17, New York Times, one of the three news organisations whose correspondents were expelled, described the Chinese crackdown on journalists “an unfortunate echo of the Cold War,” adding “it couldn’t come at a worse time.” They refer to the global spread of the deadly coronavirus, which they say, “demands independent and trusted information from the country where the scourge began.”

“The measures were redolent of Cold War clashes with the Soviet Union, when reporters often became victims of tit-for-tat expulsions over matters for which they carried no responsibility and over which they had no control,” the editorial says.

Nicholas Kristoff, a former longtime The Times correspondent in Beijing, wrote in his Twitter, “The Times has reported from China since the 1850s. As a former Beijing and Hong Kong correspondent for The Times myself, I’m truly sad to see China going backward like this.”

‘When you open the window, the flies come in’

As the crusader for reform, Deng knew the path of open-door would be bumpy and that there would be a price to pay for openness. He once said when you open the window, the flies come in. When the door for foreign press was open, Deng knew there would be stories that they did not want to be published. He understood the Chinese Communist Party would face criticism of one kind or another. Deng once said they were undaunted, saying the party would not fall because of those criticisms.

With a strong sense of self-belief in reform and self-awareness of the importance of being tolerant and accommodating to differences in systems and values, Deng and Jiang Zemin, to an extent, had stuck unswerving to reform – even after, indeed more so, after the Tiananmen bloodshed. This is despite the strong pressure from within the party for turning back. 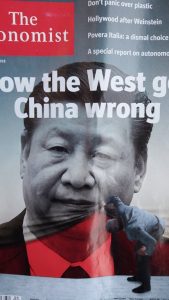 Fears of China under Xi moving backwards loomed as the cult of personal worship reminiscent of the days of Mao Zedong revived; new rounds of attacks against Western decadent thinking were launched by the party’s propaganda machine since the ascendancy of Xi.

Last week’s expulsion of American journalists, the number of which is the largest of its kind in recent memory, has done significant damage to China’s international image already blackened by the pandemic. That could not have come at a worse time when openness is badly needed in times of a global epidemic, the first known case of which was reported in Wuhan, a city in central China.

Turned back again to the 1980s, it was the same vein of pragmatism that won the benefit of doubt from many jittery Hongkongers about the viability of the “one country, two systems” policy, which allowed the city to continue its pre-1997 systems, rules and practices under Chinese rule.

For a long period of time after 1997, the Chinese government had largely been tolerant towards Hong Kong for it to handle its own affairs in the Hong Kong way. People who were deemed as politically sensitive and being denied entry into the mainland had been allowed to visit the city.

Tolerance has worn thin. Pressure for Hong Kong to act in line with the mainland authorities on matters Beijing wants to have a say has become increasingly apparent.

In the latest case of expulsion, Beijing could have handled it in a more subtle way by not including Hong Kong and Macau in the ban to show what “one country, two systems” policy was supposed to mean.

That they did the opposite by asserting the overriding principle of “one country” has deepened a feeling of distrust in Hong Kong and other parts of the world about China’s commitment to preserve a special Hong Kong in its move towards a free and open society.