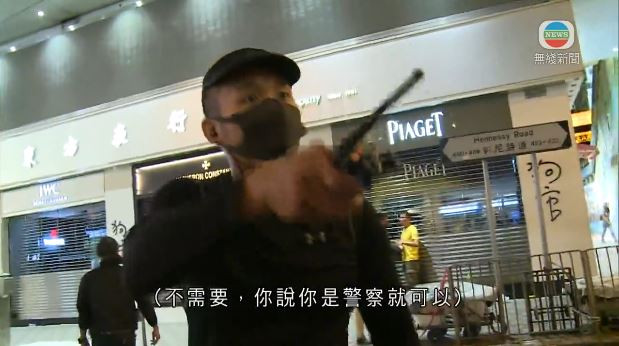 Dressed in black like protester, an identified man believed to be undercover police confronts journalists after making arrests in the August 11 clash.

Once hailed by commentators as Asia’s finest, the Hong Kong Police Force has slipped to a nadir in popularity and surged to a high point in public hatred amid burning rage over their alleged unlawful use of force against protesters in demonstrations sparked by an extradition bill.

Gone are the days when the force was seen as law-abiding, professional, political neutral, restraint and caring when exercising their powers.

That they have crushed protesters and arrested innocent citizens with ugly tactics and unjustifiable force in the ongoing social unrest triggered by the now-suspended bill sparked fears that it has already become a political tool of a regime that rules by fear.

Public anger over the integrity and exercise of power by the Police reached boiling point on Sunday with clashes between riot police and protesters broke out in more than half of the city’s 18 districts from mid-afternoon to early hours of the following day.

Following remarks early this week by both Hong Kong’s leader and senior Beijing officials that the anti-extradition bill protests have become a “colour revolution,” the Police has further hardened their tactic against protesters and ordinary citizens on Sunday.

TV footages that went viral on social media also showed a police officer put a sharp bamboo into a protester’s backpack after he was arrested. Another footage saw police officers turning a blind eye to alleged gangsters chasing up and beating up passers-by.

A Hong Kong police officer was seen shooting pepper balls at close range against protesters as they were leaving the scene via Tai Koo MTR station. The police also shot a protester with an apparent bean ban round in Tsim Sha Tsui, causing rupture of her right eye.

In Kwai Fong MTR station, officers fired tear gas and rubber bullets inside the station. In a statement, the MTR Corporation said it was “very regretful” the safety of passengers and its staff had been put at risk.

Those cases are part of a list of complaints against the Police for a breach of their own rules and regulations, making a mockery of their duty of law enforcement and Hong Kong’s reputation as a city with rule of law and freedom of assembly, among other civil liberties.

Sunday’s spate of alleged police violations of rules in law enforcement has added oil to the fire of public demonstrations against the police and the Government in the past two months.

It came on the heels of high-profile warnings given separately by Carrie Lam Cheng Yuet-ngor, the city’s Chief Executive, and senior mainland officials in charge of Hong Kong affairs, about intensified crackdown against protesters.

Speaking at a press conference on August 5, Mrs Lam claimed the nature of the anti-extradition bill protests has changed. She pointed to a popular slogan at the protests, “Liberate Hong Kong, revolution of our times,” saying it has escalated into an anti-national campaign.

“They removed the national flag, threw it into the sea, and called for a revolution to liberate Hong Kong … These actions have challenged national sovereignty, threatened one country, two systems, and will destroy the city’s prosperity and stability.”

In what is seen as an order from the central government, Zhang said: “The most pressing and overriding task at present is to stop violence, end the chaos and restore order, so as to safeguard our homeland and prevent Hong Kong from sinking into an abyss.” Zhang said there were clear evidence that showed the protests were indeed a “colour revolution.” He did not give evidence.

As if an order to suppress political dissent and punish “trouble makers” to help restore order has been made, rumours flew on and before Sunday that mainland thugs would be sent to Hong Kong to team up with local gangs to attack protesters, in particular in North Point district. North Point is a stronghold of the eastern coastal Fujian clan, who are known for their patriotism and loyalty to the ruling communist government.

On Sunday, TV footage showed a spate of cases of residents and reporters being assaulted by a crowd, with some speaking in Putonghua, in North Point. On some occasions, police officers were said to have stood by doing nothing.

Fujianese in North Point on August 11.

The North Point cases have deepened fears that about “Police-triads collusion” in penalising and scaring protesters, which has emerged when hundreds of suspected triads, all in white shirts, attacked black-shirted protesters and civilians in a rail station in Yuen Long on July 21. CCTV footage obtained by a local TV station from shops showed the white-shirted men, carrying wooden sticks, had already gathered hours before the attack in streets nearby with at least one police vehicle having passed by.

In various statements issued in the past few days, central government officials repeatedly threw their weight behind the Hong Kong Police Force.

It is hardly surprising for China’s communist regime, which does not have an elected mandate and a system of rule of law, to rely on their garrison and public security machinery to maintain order and what they deem as stability.

In Hong Kong, it has caused jitters about the change of the nature of Hong Kong’s police. The fall of the Police to become just another fleet of the mainland’s public security is a bad omen to the city’s future under the “one country, two systems” policy.

Chris Yeung, Chief Writer of  CitizenNews, is founder and editor of the Voice of Hong Kong website. He is a veteran journalist formerly worked with the South China Morning Post and the Hong Kong Economic Journal. He writes on Greater China issues.
SHARE
TWEET
PIN
SHARE