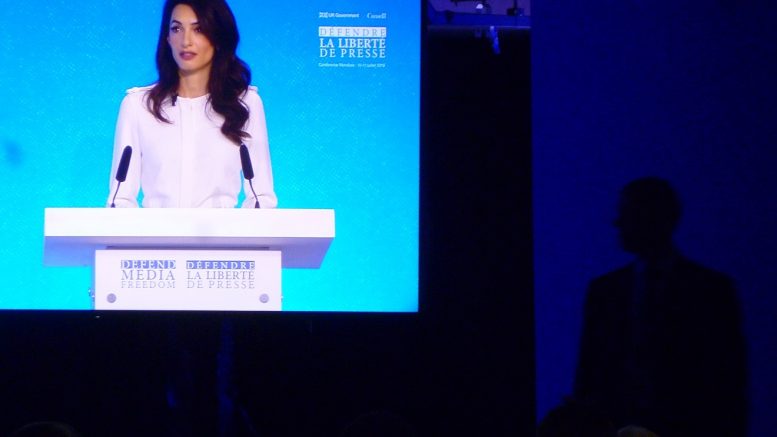 They are dubbed as the world’s two superpowers, or one and a half. That senior government officials from the United States and China, the superpower-to-be, were nowhere to be seen at an international conference on media freedom in London early this month is regrettable, but not surprising at all.

Proclaimed as the leading light of liberty, the U.S. under President Donald Trump no longer shines with Trump’s attacks against the press. He accused American journalists as “enemy of the people” and media outlets the factory of “fake news.”

In China, the communist regime under Xi Jinping has tightened control over the media, which have already been largely controlled by the state. In the 2019 World Press Freedom Index published by Reporters Without Border (RSF), China dropped to 177th place. RSF said China’s ruling elites suppressed all debate in state-run media, “while cracking down relentless on citizen journalists who try to make a dissenting voice heard.”

It is against the background of the world’s two leading countries now becoming the unlikely duo clamping down on a free press plus increased violence against journalists around the globe that the British and Canadian governments and other nations are keen to fly the banner of media freedom.

Co-hosted by the two governments, the Global Conference for Media Freedom saw 60 ministers, and more than 1,500 journalists, academics and campaigners taking part in the two-day conference on July 10 and 11. It will be held in Canada next year.

Delegates were given a bleak picture of the plight of against journalists. First violence. Across the world, 99 journalists were killed last year – more than twice as many as a decade earlier – and another 348 were locked up by governments.

Second, political leaders. Amal Clooney, a human rights lawyer and the U.K. government’s special envoy on media freedom, stole the limelight in her attack against Trump in her speech at the conference.

Trump’s repeated attacks on the media put reporters around the world at risk, she said. “Today, the country of [former President] James Madison has a leader who vilifies the media, making honest journalists all over the world more vulnerable to abuse,” said Clooney, who is married to the actor George Clooney.

Speaking as the conference’s host, British Foreign Secretary Jeremy Hunt said: “Today we send a resounding message that media freedom is not a Western but a universal value. At its best, a free media both protects society from the abuse of power and helps release the full potential of a nation.

“The strongest safeguard against the dark side of power is accountability and scrutiny – and few institutions fulfil that role more effectively than a free media.”

Hunt announced the setting up of a new Global Media Defence Fund, to be administered by UNESCO, with other government. Among the aims will be to help fund legal advice for journalists and safety training for those venturing into conflict zones.

He said the British Government will establish an international task force to help governments to deliver their commitments on media freedom, including by developing national action plans. 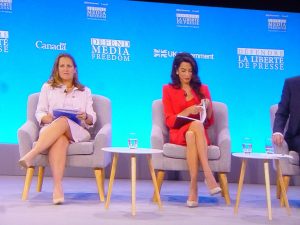 Chrystia Freeland, the Canadian Minister of Foreign Affairs, said in her speech: “We need to defend our independent press—even, and perhaps especially when it criticises us—as a central institution of democracy.

Though championing the cause of a free press, both the U.K. and Canadian government have been ridiculed for their own record in upholding press freedom. Regardless of their political calculations, it is no doubt a timely initiative to put protection against journalists on the global agenda. The reason is simple. There are growing concerns among journalists around the world free and independent press is under threat from various fronts.

On the face of it, Hong Kong journalists seem to be immune from the list of threats. A closer look shows dark clouds are gathering over the city’s media.

True, no journalists had been killed for their reporting in recent decades. The last case of its kind was the brutal chopping of the then Chinese-language Ming Pao chief editor Kevin Lau Chun-to in 2014. The spate of excessive use of force, verging on violence in some cases, and verbal abuses by anti-riot police against journalists during the anti-extradition bill protests in June and July raises concerns about “police violence.” 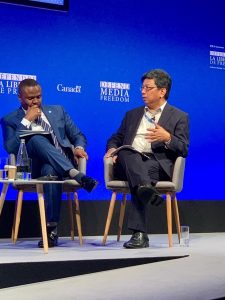 The proliferation of fake news relating to the escalating row over the protests has posed a threat to the credibility of the Fourth Estate.

That the Canadian government has invited me, in my capacity as Chairperson of the Hong Kong Journalists Association, as one of the speakers at a panel discussion about the situation in  “conflicting regions” speaks something about the deepening worries of Western countries about press freedom in Hong Kong.

Chris Yeung, Chairperson of the Hong Kong Journalists Association, was invited by the Canadian Government to join a panel discussion on threats to press freedom at the London conference.

Be the first to comment on "Media freedom is under threat"