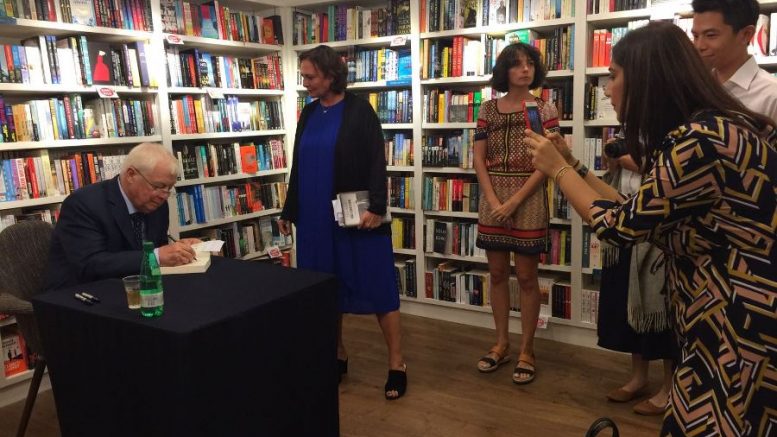 In his new book First Confession, last Governor Chris Patten waded into the issue of relationship between politics and identity as he embarked on his memory journey. “As I wrote, the question of identity moved from the wings to centre stage, and roiled politics and nations on both sides of the Atlantic.”

His commitment to promotion of his book had brought him to Hong Kong last week; he greeted his fans with his charm and autograph on his book. And his commitment to the city has given himself a special identity and role in and outside Hong Kong, which remains so 20 years after he bade farewell to Government House.

True, the last Governor is now a yesterday man. But he does not merely belong to the past. He is, as it was demonstrably shown during his just-ended visit, still a man of relevance in today’s Hong Kong.

His words on Hong Kong have resonated in some corners of the society. Suffocated by some nonsensical deeds and words recently, they found the last Governor has said something sensible. This is despite the fact that his sharp and clear criticism against the notion of Hong Kong independence is no music to some people, particularly young people. 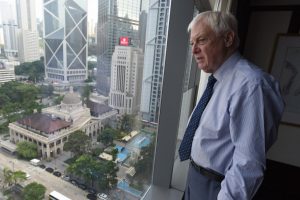 His no-ambivalent No to separatism should have put given me a membership in the “China friend club.” Although an air of pessimism has prevailed in the city, in particular in recent years, Lord Patten’s verdict on Hong Kong under “one country, two systems” remains on the positive side.

The veteran diplomat was no diplomatic venting his disappointments and concerns about the implementation of “one country, two systems” in the past few years. But he has pinned out hopes on Chief Executive Carrie Lam Cheng Yuet-ngor she would do a much better job than her predecessor, Leung Chun-ying.

He knew he could not possibly duck questions about the political strain in universities sparked by the posting of “Hong Kong independence” banners in some campuses. He called on university heads to talk to students. Similarly, he urged the Government to talk to the people.

His appeal sounds simple truth that even his staunchest critic cannot find fault. Ironically, it is the plain truth that is sadly gone missing in the Hong Kong polity.

To some cynics, Lord Patten is irrelevant and should have stayed out of the city’s limelight. It is clear, however, that his mere presence and words had continued to cause anxieties in some segments, including the Central Government’s Liaison Office. Pro-Beijing newspapers gave prominent Patten-bashing coverage during his visit. The only conclusion is that they fear what he said could create more troubles.

They cannot be more wrong.

HK has ‘as much Chinese values as British values’

Speaking in an interview with CitizenNews, a digital-only media outlet, during his visit, he recalled having watched a video about mainlanders being described as “locust.” It was a video widely circulated on social media at the heyday of a massive outcry among Hongkongers against the influx of mainland visitors.

He said: “That (the video) was very regrettable… It is a sort of distorted way of Hong Kong people standing up to the identity of Hong Kong citizens. It seems to be me that you can be a Chinese patriot who feels strongly about Hong Kong values.

“I don’t think, to be a Chinese patriot, you have to assert everything the Chinese Communist Party does. Unfortunately, you have to do it in the mainland. But you don’t have to do so in Hong Kong.”

He said Hong Kong identity was made up of its history, such as migrants from the mainland, people and their ability, hard work and sense of responsibility. And importantly, they have an “in-built understanding” of the relationship between economic freedom and political freedom, he said.

Having revisited the city’s past and the difficulties of both the Chinese and British governments in making “one country, two systems” work, he is consciously aware of the danger of either overly optimistic or excessively pessimistic.

He prefers downright pragmatism, nevertheless. “Where are we now? There you have a fantastic, free city made by Chinese people with a scaffolding of values and institutions which were partly created by the British. There are just as much Chinese values as British values.

“I don’t think it is fair to deny your Chinese nationality and identity. “

Be the first to comment on "HK a city with Chinese, British values, Patten says"