Democratic Party chairman Wu Chi-wai (third from left) says sorry for his remarks on a amnesty for Occupy participants.

On the face of it, they are two unrelated episodes in the Hong Kong serial political drama.

Episode one saw John Tsang Chun-wah, the most successful loser in the March 26 Chief Executive election, wading into the dangerous zone of Occupy Central.

Addressing his supporters in Central’s Edinburgh Place on March 24, he said: “Here we stand near Lung Wo Road and Connaught Road. Occupy happened near us over two years ago. But I hope our rally today can give a new meaning to this place.” He hoped people would remember they gathered there last night “for the unity of Hong Kong.”

Episode two featured Wu Chi-wai, chairman of the Democratic Party. He called on chief executive-elect Carrie Lam Cheng Yuet-ngor to exercise her powers under the Basic Law to grant an amnesty to all Occupy participants, including the seven police officers convicted of assaulting an activist and a retired superintendent. He said in an interview published in the Chinese-language Ming Pao on Tuesday the move could help achieve reconciliation between the government and the pro-democracy camp.

The surprise attempt by Tsang to “give a new meaning” to the site of Occupy has left some of his supporters bewildered. They wondered whether Tsang meant the “old meaning” of the Occupy should be abandoned.

Wu was less fortunate. Beginning Tuesday morning, his amnesty plea was the subject of vehement criticism not just from the rival pro-establishment force, but from within the pan-democratic bloc. Late Tuesday night, he retracted his remarks and said sorry for not having thought thoroughly about the issue.

He was roundly attacked for proposing an idea that would undermine the rule of law and independent judiciary. Rival political parties said an amnesty would blur the lines between right and wrong. Even some pan-democrats have voiced out dissenting views. 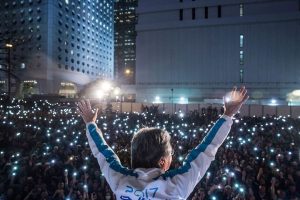 John Tsang addresses his supporters at the Edinburge Place during the CE election campaign.

Despite their different fortunes, the separate moves by Tsang and Wu to put the divisive Occupy Central story behind have proved to be premature. Although many people hope that the social cleavage in recent years worsened by the Occupy would be mended soon, such ideas as an amnesty for all Occupy participants have been deemed as too drastic.

It is no denying that an amnesty would bring about unforeseen ramifications to the city’s rule of law and independent judiciary. There are also a host of complicated legal issues that may arise if a general amnesty is granted. To put it mildly, the issue of an amnesty is too early to discuss as the legal proceedings of some major Occupy-related cases are still underway.

The truth, however, is that the city’s political landscape is still fraught with strain and frictions, doubts and mistrust. This is despite the fact that an air of moderation has been blowing in the aftermath of the March 26 chief executive election.

Pledging to foster harmony and unity, Mrs Lam made no secret her hope of getting people with pro-democracy background on board her new cabinet. This week, she is scheduled to meet with moderate pan-democrat lawmakers to explore room for cooperation, among other things. At the weekend, “Long hair” Leung Kwok-hung was given an one-off permit to join a Legislative Council delegation to inspect Guangdong’s facilities for water supply in Hong Kong.

The recent string of positive interactions between the pan-democrats and the mainland and Hong Kong authorities seems to be part of the new game plan by Beijing to try to offer their hands of friendship to the moderate pan-democrats since about one year ago.

Although the new round of warming of ties initiated by Beijing seems to have accelerated in recent weeks, there are no signs of any room for reconciliation over the Occupy protests.

Though without specifying in some occasions, senior mainland officials have shown no sign of softening and compromise over what they deem as a serious challenge against the authorities during the 79-day occupation. They have reiterated the government should handle the cases strictly in accordance with the law.

Now that the first batch of cases that involved key Occupy figures has began legal proceedings, the room for political manoeuvres that could minimise the damages to harmony is limited.

Like it or not, society and the Hong Kong and central governments will have to prepare fastening their seat belts for turbulence when the verdict of more Occupy cases is delivered.

Wu’s amnesty call has been ridiculed as naive, impractical and counter-productive. Tsang’s remarks on “giving new meaning” to the Occupy site have been greeted with scepticism.

Premature as it may be, they have told the unpleasant truth the aftermath of the Occupy must be addressed for harmony and unity of the society in the long-run.

Be the first to comment on "Occupy too hot to handle, for now"