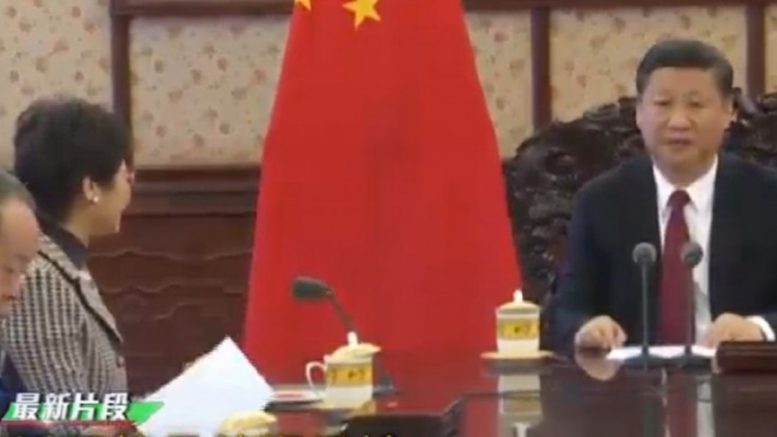 Any doubts about Beijing’s backing of chief executive-elect Carrie Lam Cheng Yuet-ngor would now have been laid to rest following her visit to Beijing this week. Reading from a script, President Xi Jinping heaped praises on Mrs Lam, which could be seen as a statement of record about why she was chosen by the ruling Communist Party to lead Hong Kong in the next five years.

Expected as it was, Xi’s full and unambiguous backing of her is a must-have for her to do the task of healing the wounds inflicted by the incumbent chief Leung Chun-ying since 2012 and putting the city back on the track of economic and social progress in the next five years.

In their remarks, both Xi and Premier Li Keqiang have put high hopes on Mrs Lam for her to scale the city to new height. They set out a long list of tasks and have not shied away from the challenges.

Without specifically referring to Leung’s reign, Xi said: “In the past 20 years, Hong Kong has gone through many ups and downs. Especially in recent years, some long-standing conflicts and problems have been gradually exposed.”

Although the reference to “long-standing conflicts” has been made since the 2000s, that Xi has made no bones about it in his remarks at the meeting with Mrs Lam shows Beijing’s lingering anxiety about the state of the Hong Kong SAR.

Arguably, those conflicts have turned from bad to worse and, at times, acute, in the past four years or so under the militant rule of Leung. They had erupted inside the Legislative Council and in streets. Among the worse of the kind were the Occupy Central protest and the Mong Kok riot. They were also manifested in a different form, namely the advocacy of pro-independence thinking.

Xi’s reference to the “conflicts and problems” “especially in recent years” has shed some light on why Leung was let go and Mrs Lam was given the torch.

Judging from Xi’s praises on Mrs Lam and the tasks set out for her by him and the Premier, there are no indications of an overhaul of Beijing’s policy and approach towards Hong Kong with a change of helm of the SAR.

Striving for economic growth and livelihood improvement will remain the priority tasks Beijing expects Mrs Lam to put high on her agenda.

This is because the central leaders feel adamant the city’s weakened economic competitiveness and deepened social grievances over livelihood issues including housing are the major causes of political restlessness.

Rightly or wrongly, they believe conflicts over political issues including universal suffrage could be significantly eased if public dissatisfaction over economic and social malaises is lessened.

It looks certain that the new administration will double their efforts to try to deliver quick results on livelihood issues as soon as they take office. Mrs Lam could not even wait for July 1, saying she will make early preparation for pumping an extra HK$5 billion on education as she pledged in her election manifesto.

For their part, Beijing will do whatever it takes to help Hong Kong on the economic front. Li has underscored the importance of the Belt and Road strategy and the development of the Greater Guangdong-Hong Kong-Macau Bay region for the future development of Hong Kong.

Against the background of “economic and livelihood first,” it is no coincidence that Li has made no mention of the task of democratic development in his remarks at the meeting with Mrs Lam.

Nor it is a mere meeting of minds by chance that Mrs Lam has said in her election campaign she has no plan to restart political reform if elected. Wrapping up her trip, she told journalists she had reported to Beijing leaders about the Hongkongers’ “concerns” about the National People’s Congress’ August 31 decision on universal suffrage.

Her remarks should not be seen as an attempt to raise the issue for fresh debate. It seems to mere cosmetic exercise to show she has conveyed people’s strong aspirations for universal suffrage to Beijing. No more. No less.

That does not mean, however, Beijing’s battle against the rise of separatist thinking is over. Far from it.

In a signed commentary on Mrs Lam’s visit, the official People’s Daily said the next chief executive should handle the relationship between upholding central power and safeguarding the city’s high degree of autonomy correctly. The SAR should correctly handle the relations between the nation’s sovereignty, security and interests and Hong Kong’s prosperity and stability.

Though mildly-worded, it is a not-so-implicit reminder to Mrs Lam there is no room for mercy and hesitation when it comes to matters Beijing perceived as a threat to the nation’s core interests.

Be the first to comment on "Hopes, anxiety and uncertainties in Lam’s Beijing trip"