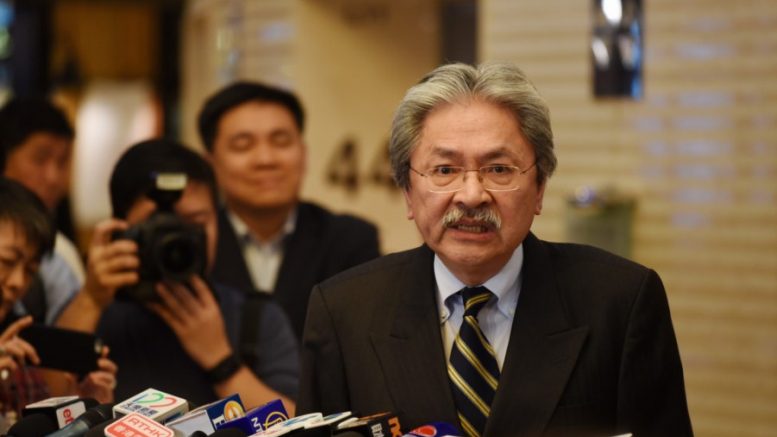 John Tsang Chun-wah, former financial secretary, shows he can fight as he said at a press conference to declare his bid for the chief executive.

Chief executive hopeful John Tsang Chun-wah switched to combat mode yesterday. In a three-thronged offensive, he moved to silence critics against his laid-back style, doubters about Beijing’s trust in him and his determination to win the top post.

Countering claims that Beijing has said no to his election bid, he told media: “There is no reason for me to believe that the central government does not trust me.” He cited his past record of being a principal official appointed by the central government since 1999, which includes an almost 10-year stint as financial secretary.

It is the first time Tsang addressed the intense speculation that Beijing had on several occasions persuaded him not to run.

While confronting the Beijing factor, Tsang took the offensive on another front, naming his major rival Carrie Lam Cheng Yuet-ngor for the first time for criticism since both declared the beginning of their campaign separately last week.

He questioned Mrs Lam’s ability to boost social harmony in the society. “I heard Carrie saying she would continue C. Y.’s direction. I think society has been divided for a long time; we need to restore harmony so that we can move forward on issues such as economic development.”

Mrs Lam has said one of the three major factors of her consideration about her election bid was whether doing so would help continue the present direction of Leung’s governance.

She has later tried to set the record saying she would continue the policies that are correct and would make changes. Mrs Lam has identified economic development, education and land and housing as her three major policy areas.

Pledge to scrap a competence exam

In a preemptive strike on the policy front, Tsang has pledged to scrap a new competence examination rolled out by the Secretary for Education Eddie Ng Hak-kim this week. The new scheme is a replacement scheme for the territory-wide system assessment (TSA), which has been vehemently criticised by parents and teachers.

The TSA scheme was shelved last year as the education authorities conducted a review.

Defending the new scheme this week, Ng said all primary schools would be encouraged and have responsibility to join the test this year, but would not say whether it was compulsory.

Parents groups are up in arms against the new scheme. They fear it would put pressure on their children. A Legislative Council panel has passed a non-binding motion calling on the Education Bureau to allow schools the right to decide whether to join the test.

Under the division of work within the government, education falls under the portfolio of the Chief Secretary. Mrs Lam, who resigned from the post of chief secretary about two weeks ago, was likely to have taken part in the decision on the new competence exam. She might face the dilemma of having to defend an unpopular policy that is close to the hearts of parents. 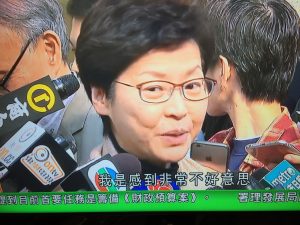 Tsang’s change of tact is likely to put more pressure on Mrs Lam, who might suffer a further dip in popularity after she made headlines for wrong reasons. They include a taxi ride to get toilet paper from the Chief Secretary’s official residence in Mid-Levels, her former residence and trouble in using an Octopus card.

According to a poll conducted by a Chinese University centre published yesterday, 48.7 per cent of respondents vote for Tsang and 39.9 per cent for Mrs Lam if they are asked to choose either one of them.

Thanks to a well- and better-prepared PR campaign and Mrs Lam’s missteps, Tsang has continued to lead the popularity race with a comfortable margin.

He took the initiative to bring on critics and attack on Lam and rebuke Leung’s veiled criticism against his laid-back style, knowing that he needs to score points on his own, not from mistakes made by his rivals, if he wants to continue to lead in the popularity race

Be the first to comment on "Tsang in combat mode"