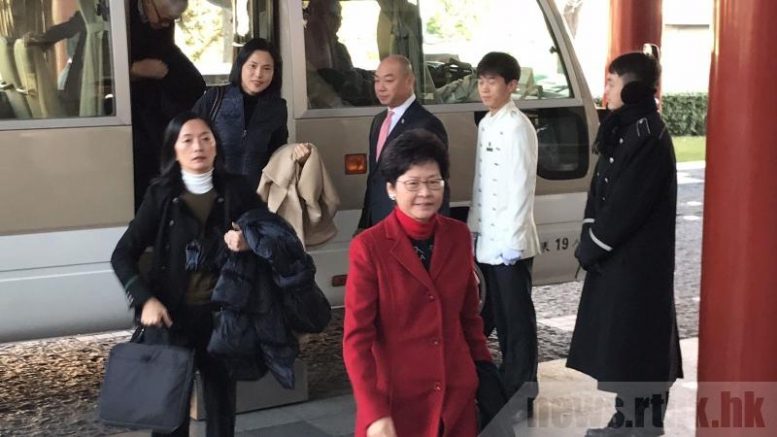 Chief Secretary Carrie Lam steals the limelight from Chief Executive Leung Chun-ying, who is on his last duty visit to Beijing in his current term. Lam is in Beijing to attend an event relating to the 20th anniversary of Hong Kong's handover next year.

Coming slightly more than three months before the March 26 Chief Executive election, Leung Chun-ying’s annual duty visit to Beijing this week should have been remembered as another high point of his rule of the Hong Kong SAR. At the end of his meeting with President Xi Jinping in Beijing today, he was expected to be given a blessing to vie for his second term.

If that was the script prepared by Zhongnanhai with the finale of a successful re-election of Leung, it became just a bunch of papers consigned to the rubbish bin after Leung told a hastily-convened press conference on December 9 he would not seek another term. He cited family reason, or more accurately, health problem of his daughter Chai-yan.

With his days at the Government house now numbered, his duty visit has become, in a sense, an embarrassment. Praises by Foreign Minister Wang Yi on Leung at a meeting on the first of his three-day visit on Wednesday have a touch of irony and surrealism.

More praises of similar kind on Leung are certain to be on the scripts of Xi and Premier Li Keqiang at their separate work-reporting-cum-farewell meeting with the outgoing Chief Executive this afternoon.

Unlike Leung’s previous meetings with state leaders when their speeches became a subject of much interpretation for their hidden messages, what Xi and Li say today will mean nothing for the all-important question of who will be the next chief executive. 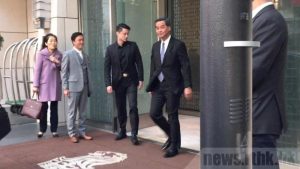 Chief Executive Leung Chun-ying is on his last duty visit to Beijing.

The irony is that the focal point of attention has and will be shifted to his two deputies. In an intriguing coincidence, the No 2 official, Carrie Lam Cheng Yuet-ngor, has traveled to Beijing. She will attend an event relating to the 20th anniversary of Hong Kong’s handover today. Leung will join after saying goodbye to Xi and Li.

Although Mrs Lam has repeatedly said her official visit has nothing to do with her consideration about whether to join the race, it is highly likely that she would try to find out the latest thinking of Beijing about the city’s next leader during her trip.

One day after Leung’s announcement, she told reporters she would reconsider joining the fray in the face of the drastic change. She is expected to announce her decision after she returns to Hong Kong at the end of her holidays that follow her official trip.

Press reports said she has already taken the initiative to meet with major property developers recently. The business sector is said to be unhappy with Leung and concerned about whether Mrs Lam would continue his anti-business policy approach if she succeeds him.

The other focal point of attention will fall onto the fate of John Tsang, whose resignation tendered on December 12 has not been officially accepted by the central government.

Compared with the case of former chief secretary Henry Tang Ying-yen, whose resignation to run the 2012 chief executive took only two days for an approval by Beijing, the “delay” in Tsang’s case has fuelled speculation.

One line of analysis is that Beijing has gone slow in handling the case to convey a message of their attitude of “discouragement” towards Tsang’s bid. Another theory is that the “delay” in giving a stamp of approval is just a political tactic aimed to pacify the discontent of the supporters of Leung over Beijing’s decision to abandon him.

Professor Lau Siu-kai, vice-chairman of the Chinese Association of Hong Kong and Macau Studies, said it would probably take two to three weeks for a Beijing approval of Tsang’s exit, which is expected to be followed by his entry into the race. The longer-than-expected time for an approval would be seen as a middle-of-the-road option that could keep any speculation about Beijing’s views over Tsang’s election bid to the minimum.

Shortly after Leung ruled him out from the race, both Tsang and Mrs Lam had been expected to announce their election bid within a short period of time.

That both have kept the waiting-cum-guessing game going on shows the new script of the next chief executive election, or at least the plot of it, is still a case of work in progress.

Be the first to comment on "The chief executive race goes unscripted, for now"