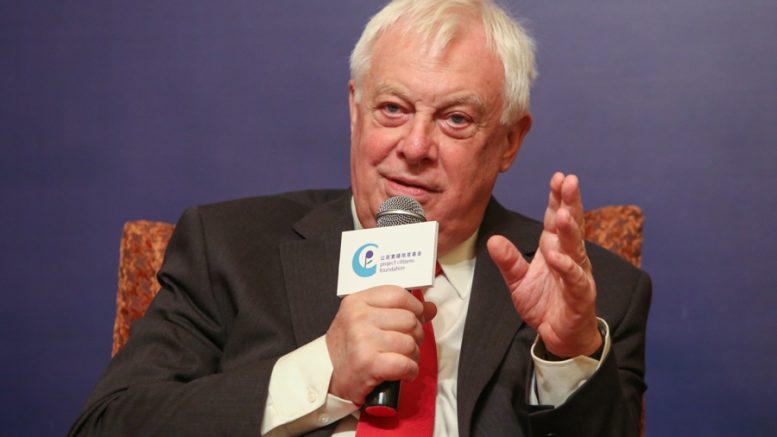 Even before he stepped afoot on the city where he spent what he remembered as the happiest years, five to be exact, in his life, last governor Chris Patten has stirred up a controversy. This time, not in his making.

Tsang Yok-sing, former Legco President, has opted out for addressing a forum, which features Lord Patten and his former right-hand woman Anson Chan Fang On-sang, because of undesirable political ramifications. Tsang explained in his column in AM730 friends have strongly urged him not to do so to avoid sharing the same stage with the last colonial governor at a forum under the title, “Are the pillars crumbling?”

He revealed he has already had numerous “stabs on his back” for having invited Lord Patten to write a preface in one of his books about English published earlier.

If anything, the absence of Tsang from the forum says something about the growing turbulence in the political scenes at a time when the battle for the post of the next chief executive grows fierce.

Despite the absence of the slogan of ABC, known as Anyone But CY Leung, at the forum held on Saturday, there were clear questions raised about the viability of Hong Kong under his rule.

In her introductory remark, Mrs Anson Chan pointed to a trend of “disconnect between government and governed, as exemplified by the 2014 Umbrella Movement and the recent rise of ‘localist’ sentiment.” 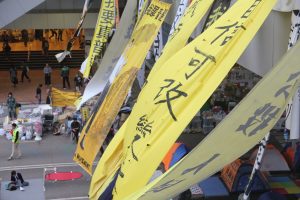 She asked: “Are our pillars of governance strong enough to withstand the current pressures, or are they in danger of crumbling under the weight of social discontent – particularly among young people – and the increasing erosion of Hong Kong’s autonomy by interference from Beijing?

“Hong Kong today is a deeply divided society. We need a Chief Executive who is able and willing to begin the healing process,” said Mrs Chan. She did not name names.

Lord Patten was more diplomatic; but he did delve into the issue of leadership, citing the wise words of Confucius in a conversation with his student Tsu-Kung (子貢). Asked to choose from “food, weapons and confidence of the people,” he said the Master told his student he could give up weapons and food, but not people’s confidence. Lord Patten quoted the Master, “… a people without confidence in its rulers will not stand.”

The buck stops at Leung

Lord Patten did not name names. In a post-forum press briefing, he refrained from commenting directly on the leadership of Leung. Asked by a reporter on whether Leung should be held responsible for the worsened schism in the society, he said he did not want to accuse anyone. He added: “But he (Leung) is the Chief Executive.”

In his speech and remarks, the last governor has underscored the importance of a leader who held dialogue with the people.

“Political stability is … more likely when a government is sensitive to the aspirations of its people.

“If you fail to do this you can easily turn moderation into extremism. If you refuse to hold a dialogue with young people about their frustrations and legitimate aspirations, it’s not surprising that they go rather further and insensible in pressing their case.”

Lord Patten was apparently referring to the rise of what he would brand as “insensible” and “extreme” pro-independence activities in the aftermath of the “moderate” Occupy Central protest.

Though without naming Leung, the last governor has hit the nail on its head when he underlined the vital importance of a leader in winning the confidence of the people, and listening and talking to them.

Rita Fan Hsu Lai-tai, who sits on the National People’s Congress Standing Committee and is not known as a soul-mate of Lord Patten, seems to have concurred with him on one thing: Leung’s problem with the people, or more accurately, his unpopularity.

Speaking on Sunday, she urged Leung to double his effort to build better relations with the people if he decided to seek re-election.

Her remarks could be seen as veiled criticism against Leung’s failure to unite the society.

As she spoke, Leung was doubling his effort to solicit support from the pro-establishment force.

On Friday, he appointed Tommy Cheung Yu-yan of the Liberal Party and convenor of the pro-establishment faction in the Legislative Council, Martin Liao Cheung-kong to sit on the Executive Council. The move is aimed to show to Beijing leaders he is able to build a strong, united pro-establishment force to help secure strong governance.

Last week, the Home Affairs Minister was accused of favouritism in the grant of a piece of land and a sum of HK$30 million to the Hong Kong Army Cadets Association, which has close ties with the pro-establishment camp.

Taken together, it seems that the gentle and subtle reminders of Lord Patten and Mrs Fan have fallen onto deaf ears.

Be the first to comment on "It’s the people’s confidence, stupid"