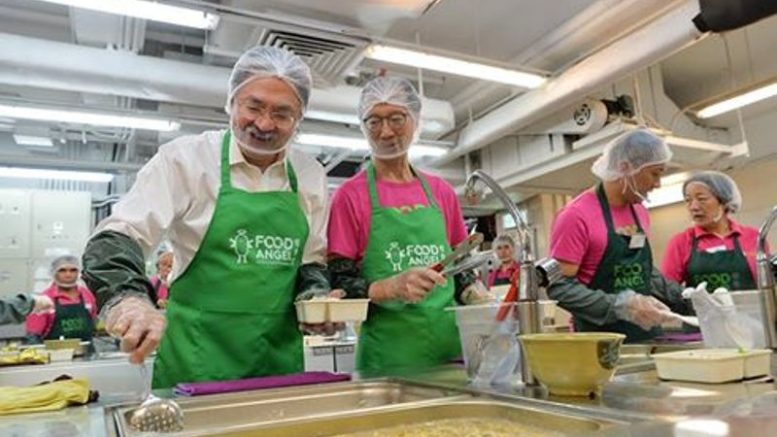 Financial Secretary John Tsang joins his predecessor Antony Leung at a charity project organised by Food Angel. Both are tipped as hopefuls for the next chief executive.

Flashed back to March 2002, former financial secretary Antony Leung Kam-chung appealed for a revival of the “spirit of the Lion’s Rock” to revitalise a dispirited Hong Kong in his annual Budget. He was at the peak of his political career.

One of the most popular minister in the then Tung Chee-hwa cabinet, Leung was tipped to a fore-runner of the post of Chief Executive after Tung finished his second term. Then came the Lexus-gate scandal. Sars epidemic. Article 23 fiasco…

The rest is history.

After years of political hibernation, he has quietly returned to the public limelight. His name has resurfaced on lists of hopefuls for the next chief executive.

Much has changed though. His liking of the theme song of the RTHK drama, Below the Lion Rock, has not. On Friday, he took the stage to sing the song at an annual dinner of the Our Hong Kong Foundation founded by former chief executive Tung Chee-hwa.

If his latest nostalgic appeal has not caused a stir, it is because pundits and public at large seem to have ruled him out in the upcoming CE race, not without reason.

Despite the fact that he has never categorically ruled him out, he showed no sign of strong desire to bid for the top post in the SAR. When asked, he has repeatedly responded with a touch of Christianity. He said he would leave it to the God. His could be a case of “to run, or not to run, God will tell.”

While keeping a degree of public exposure, he has been careful not to put him at a disadvantageous position in the political maze. He has refrained from making criticism of the leadership and policies of Chief Executive Leung Chun-ying and his administration.

Nor he gave any room for the imagination and guesswork of political animals and pundits about his liking and disliking among the lists of chief executive candidates.

It is widely believed, however, in the business and political circles that he prefers Financial Secretary John Tsang Chun-wah to C Y Leung.

Some eyebrows were raised when Leung spoke highly of Tsang at an event by Food Angel, a charity he chaired, on October 3. Addressing the audience, Leung lamented a society too divided would be difficult to govern. “To make Hong Kong more united… I hope the duties will be entrusted to the secretary,” he said, referring to Tsang, who was a guest of honour at the event.

It may be mere rhetoric out of courtesy, or a slip of tongue. But Leung has echoed the sentiments prevalent in some quarters of the society Tsang would a better choice to bridge the divide of the society.

‘Pursue our dream… with one heart’

One line of thinking is that Antony Leung will be happy to leave it to Tsang if he decides to thwart the re-election bid of C Y Leung. That remains a if as the financial chief is still contemplating the question of “to run, or not to run.”

But if Tsang has chosen not to run for whatever reasons, it should not come as a surprise that Antony Leung will take the torch.

A veteran political figure said Leung is “100 per cent ready” for the contest.

If anything, his presence at the Tung think-tank on Friday shows he has the backing of his former boss plus the reservoir of policy ideas and options at Tung’s think tank.

It is open secret that Antony Leung was being groomed by Tung to succeed him after his second term was to end in 2007. Leung’s resignation in July 2003, followed by Tung’s two years later, changed history.

That Tung and Antony Leung have now teamed up again at the Foundation could emerge a political comeback for getting the tasks they left unfulfilled more than a decade ago done.

With uncertainty lingers over the chief executive election, it is too early to rule out Antony Leung, who has vowed to “pursue our dream… with one heart… hand in hand to the ends of the Earth” in the lyrics of Below the Lion Rock.