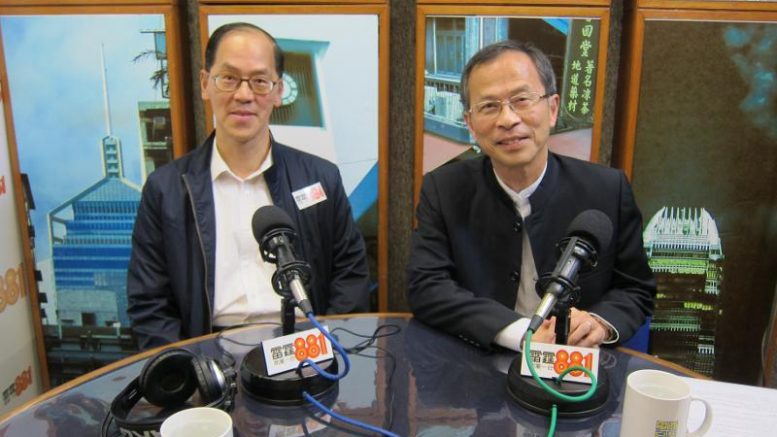 Outgoing Legislative Council President Tsang Yok-sing, tipped as a dark horse in the next chief executive election, turns a radio programme host at Commercial Radio beginning on September 12. In his debut, he has his younger brother, Tsang Tak-shing, former home affairs minister, as his guest.

Contrary to the pan-democrats’ pledge, outgoing Legislative Council President Tsang Yok-sing said he will put his money on a prediction that there will be a pan-democrat contesting the next chief executive election.

He believes there will “definitely” be a “brave” person being lured by “huge reward” to run. “Both Central (Hong Kong government) and Western (Central Government’s Liaison Office) are capable of offering the reward.” He did not elaborate.

That, however, may be a bet Tsang is happy to lose.

Tsang, who has said he would consider running and is seen as a potential candidate, has a self-play on pan-democrats’ game plan in the CE election in his regular column in the Chinese-language free daily, AM730, yesterday.

Following the Legislative Council election on Sunday, the focus of attention is shifting to the next CE election and the 1,200-member Election Committee election scheduled for December 11. The EC will elect the next leader in late March.

Under the election rule, any eligible person can become a candidate if he or she secures 150 or more nominations from the EC.

Pan-democrats keen to be king-maker

This time, major pan-democratic factions have vowed to play a different game. Instead of fielding their own horse, they plan to play the role of king-maker.

The game plan is simple. Assuming Chief Executive Leung Chun-ying will run for re-election and faces challenge from another pro-establishment figure with considerable support in a neck-to-neck race, pan-democrats, holding 200 to 250 votes, could become the critical minority in deciding who gets the top post.

By doing so, the pan-democrats could kill two birds with one stone. First, ousting Leung. Secondly, bargaining with his rival over political and policy issues.

In his newspaper column in the form of a conversation between a Tang and a Chan, Tsang wrote Beijing would prefer pan-democrat sponsoring a candidate, not being a king-maker, in the CE election.

Tang said: “After all, they (Beijing) do not have to worry about the possibility of pan-democrat being elected… Because of that, pro-establishment members will give a helping hand if a pan-democrat hopeful does not have enough nominations.”

Chan was doubtful. “If so-called ‘pan-democrat’ becomes candidate with the backing of pro-establishment members, he or she will be ridiculed as ‘being forced to contest’ and roundly condemned by the pan-democrats. Who from the pan-democrats would want to be the bad guy?”

Tang added: “It will not be difficult to find some names from the list of losers in the just-ended Legislative Council.”

Tsang did not name names.

Graduated at University of Hong Kong as a top Mathematics student, Tsang is also known for his wisdom, insight and tact in politics.

It is anybody’s guess on whether the central and Hong Kong government are contemplating the idea of backing a pan-democrat to run in order to disable their power of critical minority.

Practically, the pan-democrats could play that role if they stand united. The chance of pan-democratic united front in the CE race is high for obvious reason. They have a common enemy, namely Leung Chun-ying.

The motive of Tsang’s play is unclear. But his exposure of Beijing’s possible strategy will make it even more difficult for its implementation even if, a big if, a pan-democrat loser agrees to act as an also-ran. Anyone being seen as part of Beijing’s game plan will not possibly be able to get the pan-democrats’ vote in the secret balloting at the Election Committee.

Even if any pan-democrats are seriously considering to run, Tsang’s predicton might scare them away as their bid could be seen as a plot by Beijing to counter the pan-democrats.

Nothing is impossible in politics. Results of the Legco election is just an example.

What looks certain is that Tsang has nothing to lose and plenty to gain if he loses his self-made bet on pan-democrats’ plan for the Chief Executive election.

If so, the next CE race will see a race between two pro-establishment candidates. One is a Leung. The other is a Tsang. Which Tsang? Your guess is as good as mine.