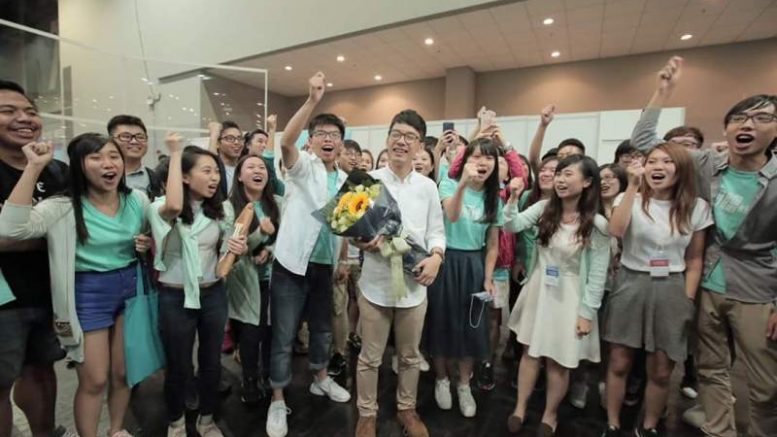 A student group, Demosisto, celebrates the victory of their co-founder, Nathan Law, a former Occupy Central student leader, in the Legco election.

The people have spoken out. More than 2.2 million voters have picked from a list of Legco candidates their best hope for building a better Hong Kong on Sunday. Not surprisingly, their selection was diverse. There is one thing in common, nevertheless. They want change. That could not be good news to Chief Executive Leung Chun-ying.

Given there are no signs, as of now, of Beijing dropping Leung from their list of could-be candidates, pro-establishment candidates had been ambivalent in the election campaign on the question of whether Hong Kong should have a new chief executive.

The major groups including DAB and the Federation of Trade Unions said they want to see who else would run. Estella Chan Yuk-ngor, who contested the New Territories East geographical constituency, was one of the several candidates who said Leung has done a great job. Chan got 486, representing 0.08 per cent of vote share.

The pan-democrats were certain. Although not all pro-democracy candidates joined the chorus of ABC, which stands for Anyone but CY, they have given a clear voice of their disapproval of Leung’s re-election bid.

True, ABC was not the defining election. But there is little doubt the Leung factor has made an impact on voters’ behaviour.

If the pro-establishment force was coy about the issue of Leung, they had been aggressive in attacking the pan-democrats on two fronts, namely the Occupy Central and Mong Kok unrest and the problem of filibustering in Legco.

As if the warnings of turmoil in Central and Mong Kok streets and inside Legco were not enough in demonising the pan-democrats, the issue, or non-issue, of Hong Kong independence was made a bigger fuss on the eve of the beginning of the election’s nomination period. 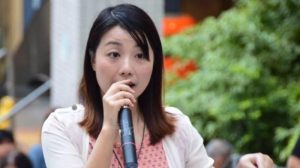 University lecturer Lau Siu-lai, who rose to political fame during the Occupy sit-in, wins a seat in Kowloon West geographical constituency in the Legco election.

Two days before nomination began, candidates were required to sign a new “confirmation note” to acknowledge their understanding on three provisions in the Basic Law. It includes Article 1 that says Hong Kong is an inalienable part of China.

The so-called “anti-independence” note has paved the way for the unprecedented decision by returning officers of the election to declare the nomination of six candidates, including Edward Leung Tin-kei of the Hong Kong Indigenous, as invalid.

The controversial move had provided ammunition for pan-democrats to accuse the Government of making political vetting of candidates. It also offered the pro-establishment camp an issue for them to put pressure on their pan-democrat rivals to declare their stance on Hong Kong independence.

By doing so, the Government and their allies had hoped to counter the pan-democrats’ “anti-Leung” card and put them on a “no-win” situation having to declare their stance on the pro-independence issue.

With the pan-democrats and loyalists getting about 55 per cent of total votes in geographical constituency polls similar to the 2012 polls, the pro-establishment’s “anti-independence”, “anti-Occupy” and “anti-filibustering” strategy helped little to boost their total votes.

This is because the negative impacts of those issues on the pan-democrats’ have largely been cancelled out by the unpopularity of Leung and his lacklustre governance in the past four years.

The Leung factor has emerged as a liability for the pro-establishment force in the general election.

The unexpected defeat of Tony Tse Wai-chuen, the incumbent of the architectural, surveying, planning and landscape functional constituency, who is known as a close ally of Leung, also shows support for Leung in some of his friendly sectors may be on decline. (Leung is a registered voter in the FC.) For the first time in history, the seat went to a pro-democracy candidate (Professor Yiu Chung-yim).

Meanwhile, attempts by the pro-establishment force to challenge the long-time dominance of the pan-democrats in some functional constituencies including education, information technology and accountancy have failed.

Compared with previous Legco polls, the Sunday election was highly political. Of the 45 per cent who backed pro-establishment force, many shared Leung’s call for voters to “vote them (pan-democrat trouble-makers) out.” Of the other 55, most, if not all, want to kick Leung out.

Seen from that perspective, the election result is hardly good for Leung’s governance and bid for five more years at the helm.