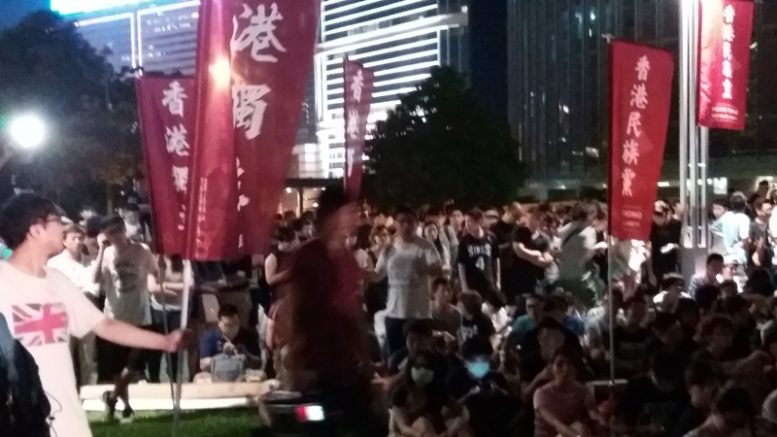 Thousands of people attend a pro-independence rally at the Tamar Park on Friday.

Economists often assume that people are rational. In real life, however, many people have been hijacked by their emotions or the dogmas that they have adopted. In real life, some people do shoot their own feet. In so doing they make their lives and those of others miserable. What a shame!

The antithesis of emotion is reason; the antithesis of dogmas is also reason. As humans, we all have emotions, and I espouse emotions and congratulate myself for being human. Yet I have learnt to control myself, so that I will not allow important decisions to be wavered by emotions. My training in economics and my thirst for wisdom and the betterment of mankind compel me to take the road of reason wherever I go.

These days some of my compatriots in Hong Kong are seeking Hong Kong’s independence. I feel sorry for them, because they are wasting their lives for a dream that will not spell good for themselves or for others. I very much hope they will give up this pursuit, and spend their youth on something truly worthwhile. They may have strong emotions seeking to be free from China’s sovereignty, and they may also have strong belief that people should be free to decide their political future. Yet deciding to spend one’s life on such pursuit must be based on costs versus benefits: in particular social costs versus social benefits. We must ask: what good will such pursuit bring to Hong Kong? We must also ask: what costs must we endure, in order to be serious about the pursuit.

We have a population of over 7.3 million in this city. Hong Kong is more populous than Denmark, Norway, or New Zealand, but far smaller. How can we feed and clothe this population? We also do not just want to survive. Most of us want a good life. We want good education and medical care for our kids, nice amenities, entertainment, protection from crime and particularly terrorism. We want art and culture, etc. etc. Can we survive without trade? Can we survive without trade with the mainland? Can we free ourselves from depending on water supply from the mainland? What do we gain from being independent?

Then we have to ask: What do we have to lose from fighting for independence? We will certainly lose peace and social order. People will lose jobs. Incomes will fall; government deficits will emerge and rise; lawlessness will rise. That means crimes, loss of our sense of security and the freedom to walk around the city without much anxiety about being robbed or killed. Even if independence were achieved, poor relations with our neighbor next door would mean sharply reduced economic opportunities, the need for a visa to visit the mainland, etc.

Equally important, when our young people act to seek Hong Kong’s independence, they are immediately hurting the interests of the majority who just want peace and quiet, and the freedom to go about their day to day activities as before. If our pro-independence friends are so much concerned about rights, should they also be concerned about the rights of other people who want to espouse the status quo?

We may not like the political climate on the mainland, but we need to recognize the fact that China is a peaceful and prosperous country that compares favorably with many other countries. Some people may think of China as undemocratic. But China does allow and practice rotation of the leadership. We have also to accept that the search for a more effective set of government institutions that will serve people better is still an unfinished job.

One thing I like today’s China is the pragmatic philosophy inherited from Deng Xiaoping. A cat that catches mice is a good cat, regardless of its color. As an economist well acquainted with the functioning of free markets, deep in my mind I have realized that central planning will not work. China has gradually moved from a command economy that nationalizes all economic activities to a market economy that allows private ownership, and in so doing abandoned some of the basic tenets of Marxism! The world today is the result of many historical accidents and the interaction of major forces, including nationalism, militarism, socialism, capitalism, regionalism, and globalism, among others. We should congratulate ourselves for belonging to a corner of the world that is particularly peaceful, thanks to some historical accidents. Let us cherish that and extend that, both across time and across space, for the good of our future generations. If I may, let me pray for the triumph of reason and rationality over emotion and emotionism!

Professor Ho Lok-sang teaches economics at the Lingnan University. This is an edited version of his speech broadcast at RTHK’s Letter to Hong Kong on August 7.