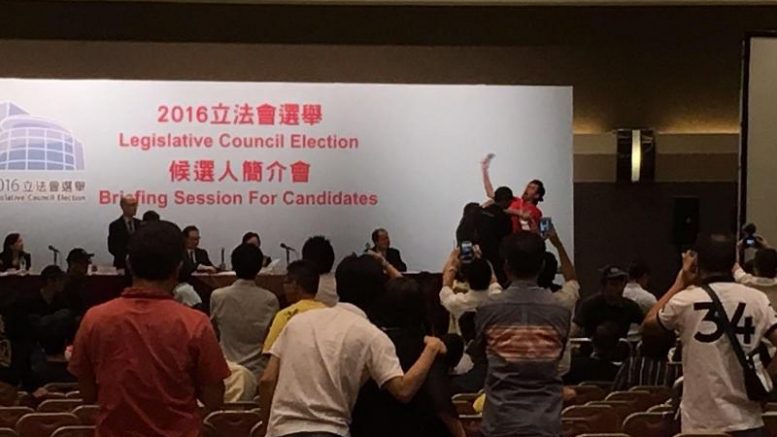 Chaos erupted at a Electoral Affairs Commission briefing for candidates contesting for the Legislative Council election on Tuesday. Protesters are infuriated with the decisions to disqualify candidates deemed as separatists.

It was largely seen as a non-event in previous elections with candidates given reminders of the election rules at routine briefings held after nomination closed. But scenes of chaos and clashes at the briefing held by the Electoral Affairs Commission (EAC) for the candidates contesting the Legislative Council election yesterday show something has gone deplorably wrong.

The electoral body, which is supposed to be the referee in election match, faces accusation of having taken side. Pan-democrats branded as political screening EAC’s decision to show a red card for localist Edward Leung Tin-kei even before he put on his boots for the New Territories East geographical constituency match.

The EAC and the constitutional affairs officials behind them have only had them to blame.

Leung was informed by the constituency’s returning officer yesterday his application for candidacy has been invalidated.

It came after Leung, a member of Hong Kong Indigenous, has publicly declared he would not advocate Hong Kong independence in the election campaign. Views about independence on his Facebook had been removed. Leung has been asked by the returning officer to clarify his stance on independence.

The returning officer, who is identified as Cora Ho Lai-sheung, a civil servant, is unconvinced.

Officer: ‘I do not trust Mr Leung’

In a 12-page email to Leung yesterday, Ho said: “What Mr Leung means should be: in order to enter Legco, he would take whatever means, including stopping advocating Hong Kong independence; and once he becomes a lawmaker, he will continue to advocate independence.

“I therefore do not trust Mr Leung genuinely changed his previous stance for independence,” Ho wrote.

With the advice of the Department of Justice, Ho attached media reports on Leung’s past remarks about independence, and even his own Facebook posts. She included a transcript of remarks Leung had made at a press conference after signing the confirmation form.

Leung claimed the elections were manipulated by the Government. “The returning officer doesn’t want to believe what I say in black and white and concluded that she simply doesn’t believe that I am genuine in what I say… Is she (Ho) a worm in my mind?” 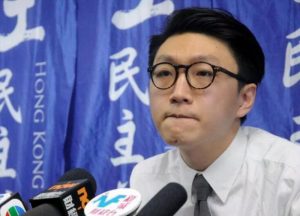 Edward Leung of Hong Kong Indigenous is perhaps the only pro-independence aspirant who stands real chance of getting a seat in the Legislative Council. He is disqualified.

Leung has a point. Ho’s claims that Leung will continue to advocate independence after he becomes a legislator could only be substantiated by Leung’s previous remarks that he has already negated.

A decision to disqualify a hopeful from contesting election that is based on guesswork on what he or she may do after being election is highly subjective; it is hardly in line with the spirit of rule of law.

A fleet of politically neutral and professional civil servants is among the elements of Hong Kong’s success. They have played a vital role in ensuring the city’s election is fair and open and, more importantly, boosting people’s faith in election.

Role of civil servants in doubt

The row over the new election rule, in the form of an “anti-independence” confirmation note, has raised serious questions about the role of civil servants in elections.

There are fears that civil servants are no longer the referee in election football match, but the 12th player of the government-friendly team.

Political parties and activists representing different shades of the political spectrum are poles apart on a host of issues, notably the pace of democratisation. But they and the Government have been abide by the rules of election game.

Put simply, let people speak with their votes. Or in the words of Chief Executive Leung Chun-ying, vote them out if you dislike them.

It could not be more ironic that voters in New Territories East who oppose Hong Kong independence are denied the opportunity to vote Edward Leung out through their ballots.

It is profoundly damaging to the integrity of the civil service and electoral system for civil servants to abuse their power to give a boot to player they rule as separatist.