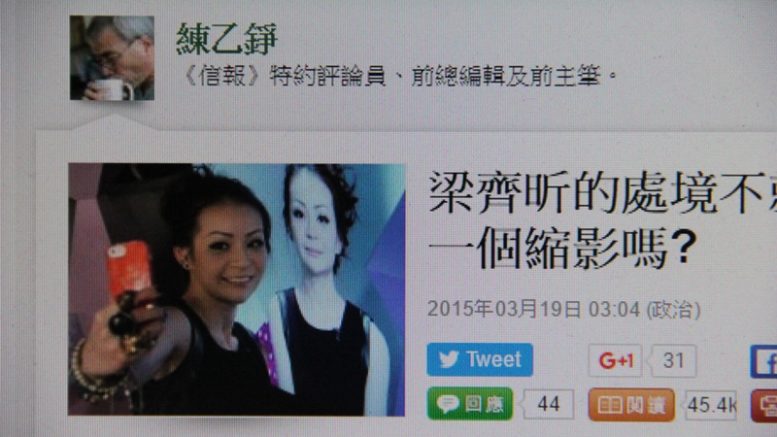 Leung Chai-yan, the younger daughter of Chief Executive Leung Chun-ying at the centre of a spate of controversies, is the subject of political satire in one of Joseph Lian's HKEJ column.

Joseph Lian Yizheng (練乙錚) is no ordinary columnist. Known for his sharp criticism against Chief Executive Leung Chun-ying and the Chinese Communist Party in his columns published in the Hong Kong Economic Journal, his farewell to the elitist newspaper has sent more chills to the city’s jittery media community.

On Friday, the former chief editor of the newspaper was told there would be no space for his column due to a content revamp for cost-cutting. In an open letter to friends published in some media yesterday, Lian claimed his column on Hong Kong independence published on Monday last week might have touched on the raw nerves of the authorities.

With fears about Beijing tightening its grip of Hong Kong permeating across the city, the muting of Lian’s critical voices in HKEJ has added more gloom to the city’s prospect for a free and independent press.

An economist by training, Lian switched to journalism in 1991 when he joined the elitist Chinese-language newspaper. He was Chief Editor between 1996 and 1998. He became a full-time member of the Central Policy Unit, a government think-tank, in 1998 until 2004 when he sacked. It came after he joined a rally outside the Legislative Council in the wake of the July 1 rally in 2003. Developments unfolded since then show that has emerged as one of the turning points in his journalism-political path.

In 2007, Lian returned to HKEJ as their editorial writer. After his contract expired, he took up a teaching post at an university in Japan. About the same time, he started writing a regular column for HKEJ, mostly on politics and economics. His blistering attacks against Leung and the mainland authorities have increasingly become a source of embarrassment for the newspaper owned by Richard Li Tzar-kai, the younger son of tycoon Li Ka-shing.

CY Leung a subject of criticism in Lian’s columns

One of his articles that cast doubts on Leung’s connections with triad groups during the 2012 chief executive election has become the subject of a threat of legal action invoked by Leung for allegedly being libellous. During the Occupy Central movement, he was accused of fuelling the civil disobedience movement by siding with the students. 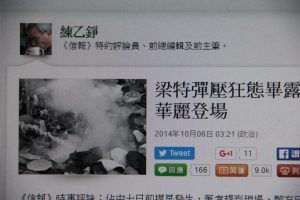 Joseph Lian blasts Chief Executive Leung Chun-ying for his handling of the Occupy Central protests in one of his columns published in the Hong Kong Economic Journal.

With his relation with the Chief Editor Alice Kwok turned from bad to worse in the past two years, his departure from the newspaper had been seen as just a matter of time.

In his open letter, he revealed the management had told him of a cut of his column fee by 60 per cent due to financial difficulties. He accepted it. “I don’t mind as I have gone through the good times and the bad times with HKEJ.” “Last Friday, the Chief Editor notified me through email the column will be suspended due to a revamp of pages. Why?”

Lian wrote he was sympathetic towards students since the Occupy Central protests, and was supportive of their advocacy for the “second round of future talks” for post-2047 Hong Kong.

But fearful of the risks and threats to the young advocates’ personal freedom and safety posed by the authorities because of their radical advocacy, he said had proposed to the pro-independence activists the notion of “jurisprudential Hong Kong independence.”

Inspired by the “jurisprudential independence” strategy by the pro-independence campaigners in Taiwan, he believes promoting independence within the constraints of law and the parameters of justice would give no excuse to the authorities for them to suppress the movement.

“To avoid unnecessary damage to social movement, (we) should not call for independence. If (we) have to do so, it can only be ‘jurisprudential independence’.”

He said the idea that gave greater protection to pro-independence advocates has apparently scared the mainland authorities.

As it happened, his column that expounded the notion of “jurisprudential Hong Kong independence” has emerged as the last straw on the back of the camel.

In her response to the media, Ms Kwok maintained it was a normal revamp of columns, adding Lian was just one of the 10-odd writers whose columns would be terminated.

Her colleagues think otherwise. An open letter issued by a group of HKEJ staff and ex-colleagues have called on her to give a full explanation of the Lian case and to withdraw the decision to drop the column.

Admittedly, Lian is not the first leading journalist or writer who was axed on ground of cost-cutting. It was not long ago a deputy chief editor of the Chinese-language Ming Pao, Keung Kwok-yuen, was sacked for the same reason. Some other cases went unreported.

If Lian’s case has caused even more anxieties, it is because he is no ordinary columnist. He is one of the remaining icons of the once-prestigious newspaper some have compared to the Financial Times.

It is inconceivable, verging on ridiculous, that an icon columnist envied by some other press and admired by a fleet of loyal readers would have to say goodbye to the newspaper because of a dubious cost factor.

It is anybody’s guess on how the removal of Lian’s column could help improve the newspaper’s financial health. But before that makes an impact, it has inflicted deep wounds in the credibility and reputation of the newspaper hardly earned by a fleet of professional journalists with a heart and a soul. Once lost, trust and credibility may never be regained.

The damages to public faith in freedoms under the increasingly problematic “one country, two systems” policy, in particular among the media corps and the educated public, should not be under-estimated.

With the shadow of Beijing seeking to contain the growth of political radicalism in the form of localism and pro-independence thinking, the end of Lian’s column in  HKEJ will ignite more fears about the shrinking space for freedom of expression and the press.