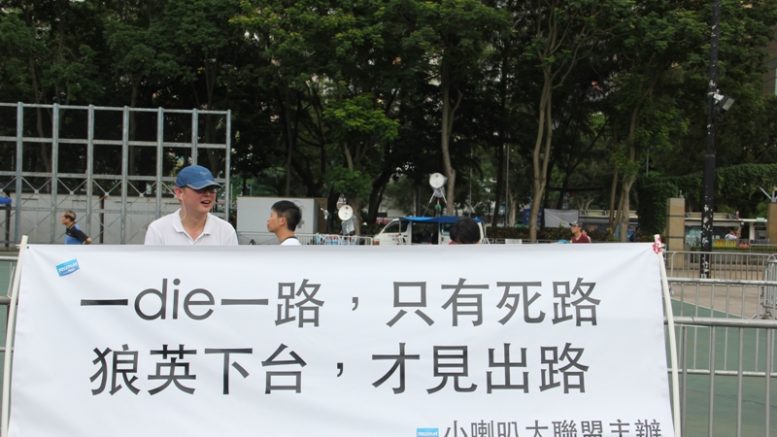 Protesters say in banner Hong Kong will only have future if CY Leung steps down.

In his annual self-appraisal, Chief Executive Leung was trumpeting his success in bringing down the number of welfare subsidy cases to a 14-year low and speeding up Hong Kong’s alignment with China’s “Belt and Road” strategy, among others.

The main trust of his 39-page report on his governance is similar to the messages he was keen to convey in a series of interviews he gave to news media in the past few weeks.

Leung was desperate to convince citizens he is leading the city towards the right direction and formulating right policies accordingly in areas ranging from “Belt and Road”, land and housing supply to infrastructure and poverty-elimination.

On Tuesday, he echoed an admission by his deputy, Carrie Lam Cheng Yuet-ngor, whose official title is Chief Secretary, that the Chief Executive is suffering from a lack of legitimacy. Reopening political reform aimed to elect the leader by universal suffrage would give the chief executive “greater legitimacy,” he said.

Without legitimacy based on elected mandate, Leung could only remedy his major weakness by boosting output legitimacy. Or put plainly, he needs to gain legitimacy and people’s mandate by results.

If anything, results of opinion polls have said it all. Leung’s popularity has stayed below the comfort zone. Pollsters say his unpopularity has persistently stayed at the alarming level.

Vowing to build a “Hong Kong camp” after his victory in the 2012 chief executive election, Leung has failed in mending the fences within the pro-establishment camp in the wake of the bitter rivalry between him and his main rival Henry Tang Ying-yen in the election. James Tien Pei-chun, head of the pro-establishment Liberal Party flew the banner of a campaign known as ABC, which stands for “Anyone but CY”.

Worse, his relations with the pan-democratic opposition turned from bad to worse since he took power.

Ask 10 people in the street on whether the political scene has become better or worse in the past four years, most are likely to say it got worse. And, worse, they fear the worst is yet to come.

At the PR front, Leung and his family and ruling team has been the subject of ridicule and bashing in the media and some quarters of the society for alleged wrongdoings and incompetence.

Leung has failed to come clean on some controversies including a HK$50 million golden handshake given by UGL and the so-called “luggage-gate” scandal.

Already suffered from a lack of legitimacy, the embedded perception of him being dishonest held by a considerable portion of the society has worsened his popularity.

To be fair and honest, it is plainly wrong to dismiss all Leung has done as wrong and his policies as bad. Some such as high-speed rail link and third runway are no doubt controversial. Admittedly, they have received considerable support in the society.

It is also fair to say, however, Leung has failed to score in some vitally important policy issues. Put together, they have turned what he would have argued as a shining record in policies to a mixed case.

For instance, Carrie Lam has admitted the Government has run into difficulty in handling the so-called “three big mountains”, which refers to three contentious livelihood issues, namely MTR fare, the Link and the mandatory provident fund scheme.

It is widely known that Chinese officials have indicated three criteria in the selection of the chief executive. They are the trust of the central government, support of Hong Kong people and ability of governance. On its face, Beijing still trusts CY. But he has failed to gain public support and his governance fraught with controversy.

The key question Beijing needs to find an answer is whether they trust and have faith in CY that he will be able to boost his popularity and govern effectively if he is given five more years.

Legislative Council President Tsang Yok-sing said in an interview with the Cable TV on Wednesday he was told by central government officials Beijing would not “anoint” the next chief executive.

If true, it means Beijing will not put all its bet on CY but will allow a contested election. Leung has claimed in an interview the incumbent chief executive would have an edge in seeking re-election. But for an incumbent who has largely failed the “three Ps” test, his four years of governance would be more a liability than an asset in his re-election bid.

Be the first to comment on "CY gets ‘Fail’ in politics, PR, mixed result in policies"