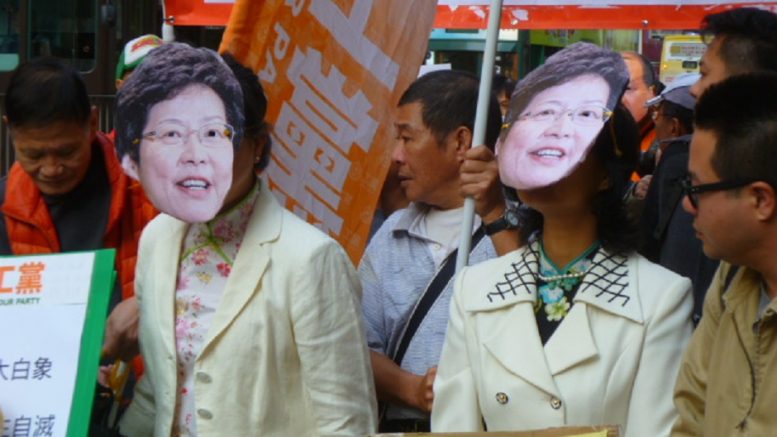 The popularity of Chief Secretary Carrie Lam Cheng Yuet-ngor slips in the wake of a spate of controversial issues she handled, including political reform and retirement protection. That does not dampen speculation about her bid for the post of the next chief executive.

Fighting back criticism against her civil service colleagues over the handling, or rather mishandling, of the “lead-in-water” scandal at a Legco meeting last year, Chief Secretary Carrie Lam Cheng Yuet-ngor has hinted at her imminent retirement from the corridors of power. She told legislators she has more guts and dare to speak boldly because she did not aspire for higher positions in the Government.

One year on, she remains bold in countering attacks against the Leung administration she deems unfair. Her insistence that no single official in the bureaucracy should be held responsible for the tainted water scandal is just one of the cases in point. But increasingly, her claim of having no intention of running for the next chief executive election has been greeted by doubts.

In what is seen by political pundits as a tentative governing blueprint, Lam has shared her “seven visions” for Hong Kong at a forum entitled Imagine Hong Kong organised by the Path of Democracy to mark its first anniversary on Saturday.

“I always tell colleagues not to criticise judges. If they do not agree with their ruling, seek it through the judicial system.”

“Protection of civil rights and liberties does not mean one can violate the laws. I support the police’s condemnation against the violent behaviour of protestors outside the Government House.”

“I earnestly hope the next administration will reopen political reform… Chief executive needs to have more legitimacy from the people.”

“I don’t want to see certain professions and society at large taking a closed-door mentality in resisting the entry of overseas talents.”

“Regardless of the criticism, this administration has made remarkable achievements in alleviating poverty and helping the elderly people.”

Legislative Council President Tsang Yok-sing was spot-on in his response to Lam’s remarks. He said she should have expounded her thoughts on ways to improve governance and resolve contradictions in the “one country, two systems” policy if it was meant to be an election manifesto.

If her speech has been seen as a curtain-raiser of blueprint for the 2017 chief executive election, it is because of the growing speculation that she was moving in the closer, albeit in baby steps, towards the contest, not distancing from it as she would like others to believe.

Or to say the least, she seems to be keen to send a message to Beijing and the kingmakers in the election game she is available if the race is open and, if elected, her priority tasks such as reopening political reform.

Whether the likelihood of a real contest for the top post is a big or small “if” is still unclear. Beijing is apparently still assessing the merits and demerits of a contested election, taking stock of the 2012 Leung Chun-ying versus Henry Tang Ying-yen election and the 2016 public opinion.

One thing is certain. Beijing cannot ignore calls for a real contest and criticism against the performance, integrity and style of Leung. The chance of Beijing allowing at least one serious candidate challenging Leung, who is widely tipped to seek re-election, is high. 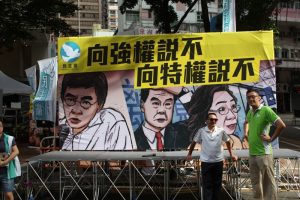 Democrats ridicule the alleged abuse of powers by Chief Executive Leung Chun-ying at the July 1 rally.

If that is the case, it is likely that Lam and her supporters are keen not to categorically rule herself out of the race.

The CE election aside, the increased exposure of her and her boss, Leung Chun-ying, recently is no doubt related to the upcoming Legislative Council election.

Take political reform as an example. Lam’s hope for a fresh round of political reform in the next administration is clearly aimed to pre-empt such demand, which will be one of the election issues on the manifesto of pro-democracy candidates.

Her “visions” on a wide range of areas could also be the government’s responses to relevant concerns, which will figure prominently in the manifesto of Legco hopefuls in particular the pan-democrats.

By doing so, she may have hoped to ease the public discontent against the Government, thus alleviating the pressure on candidates from the pro-establishment force.

From both the perspectives of the chief executive and Legco elections, it is ostensibly clear Mrs Lam is still in high spirit and working mood at what could be the most critical time of her political career.