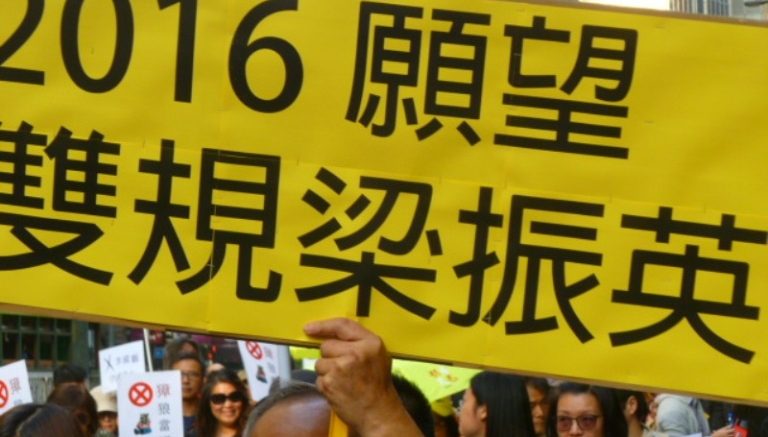 Protesters call for a probe into the alleged wrongdoings of chief executive Leung Chun-ying at the New Year's Day rally.

Like the spring weather in Hong Kong, whether former chief executive Tung Chee-hwa supports Leung Chun-ying for his second term is unclear, at least for now.

But speaking in length on the city’s systemic deficiencies that have troubled he and his two successors since the 1997 handover at a Our Hong Kong Foundation lunch talk Monday, Tung has apparently attempted to take the heat off from Leung his governance fiasco.

His message is: blame the political system, not CY. Or crudely put, anyone including CY who becomes the chief executive will have his or her hands tied under the present political setup. He and his immediate successor Donald Tsang are no exception.

It is too early to tell whether Tung’s strategy, if that is his hidden “back-Leung” game plan, works. Though nothing new, his diagnosis about the failure of three chief executives to implement the so-called “executive-led” model has drawn feedback from politicians and pundits.

Starry Lee Wai-king, chairwoman of the Democratic Alliance for the Betterment and Progress of Hong Kong, yesterday echoed Tung’s view that the governance difficulties faced by the three CEs stemmed from the political system.

She said the chief executive should take the lead to form a “ruling coalition”, who shares both praises and criticisms and real power. “Simply speaking, (the CE) should share power with political parties, accept some ideas from parties in exchange of their votes in the legislature,” she said.

Lee’s remarks went a step further from what Tung has said. In his speech, Tung has called on the CE to forge a “closer partnership relationship” with the pro-establishment camp and allow them to “get more involved” in the implementation and discussion of government policies. As for the opposition, Tung urged them to be “rational and constructive”, adding the government should strengthen communication with the public.

Importantly, Tung has also highlighted the fact the CE does not lead any political parties. But he stopped short of saying whether the ban on the CE for being a member of political party passed into law during his reign should be lifted.

Equally important, he did not delve into the performance of Leung in the past four years in his speech.

With the upcoming Legislative Council election campaign set to kick off soon and the jockeying for the 2017 CE race heated up, Tung’s governance talk seems to be a calculated plan to back Leung and the pro-establishment candidates in the September polls, albeit indirectly.

By shifting the public discussion to the structural deficiencies and such remedies as ruling coalition, Tung and loyalists such as DAB could avoid the issue of the alleged failures of Leung’s leadership, including attacks against his integrity and credibility, in the election period.

Now that Leung’s unpopularity has stayed at a high point and calls for ABC (anyone but CY) in the two elections are set to grow, they have acted early to try to dilute the negative impact of the CY factor.

Fairly speaking, any chief executive will run into the same difficulty pushing through policies in the legislature if he or she does not secure support from the majority party/parties through alliance-building, as it was the case in the past 18 months.

It is equally true, however, the style, tactic and approach of leadership of the chief executive could also be a make-or-break factor in certain political and policy battles.  That factor is even more important when the flaws in the system are not yet fixed.

Walking the talk of better governance, therefore, could only move forward with two legs: fix the system and change the style of leadership.

Be the first to comment on "Blame the system or CY Leung?"