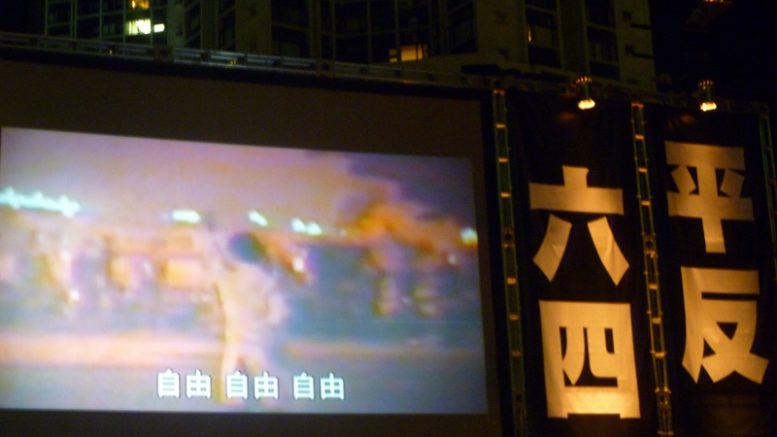 Images of the Tiananmen crackdown are shown on a June 4 candle-light vigil at the Victoria Park.

This time every year in the past 26 years, tens of thousands of Hong Kong people mourned the victims of the June 4 killings at and around Tiananmen Square in the early hours of June 4, 1989. Understandably, their feeling of anger and sadness about the brutal crackdown has thinned as time went by. Some may have forgiven and forgotten. Many have not; they never will.

Like every June 4 since 1990, tens of thousands of them will attend the candle-light vigil at the Victoria Park tomorrow to pay tribute to the victims and, more important, to reaffirm their belief in justice and renew hope for a democratic, free China.

But in some important aspects, this year’s June 4 anniversary will not be the same.

For the first time since 1989, the Hong Kong Federation of Students (HKFS), the umbrella group of university student unions, and student bodies of government-funded universities will shun the remembrance at Victoria Park. (The HKFS did not attend last year’s vigil. Some university student unions did.) The student bodies will hold separate rallies about the same time on a different theme: the future of democracy and Hong Kong as a whole. 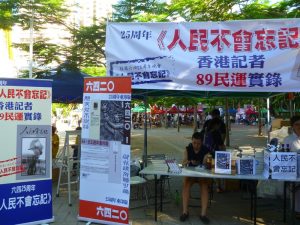 Copies of a book on June 4, People Will Not Forget, on sale at Victoria Park, scene of the annual June 4 rally.

The bloody suppression of the students-led protest in Beijing in 1989, some student leaders have opined, is not relevant to the city’s democratisation and their future. Some said it happened on “foreign soil.” Head of the editorial board of the Shue Yan University’ students union caused a furore on the Internet when he likened the organisers of the vigil to “pimps and bawds in a brothel”.

“The Hong Kong Alliance in Support of Patriotic Democratic Movement in China,” Ng Kwai-lung wrote, “has become pimps and bawds in a brothel after they themselves were raped.” “Its task is to lure young girls to be tainted, before submitting them to the gangs and bandits.”

The Alliance was formed at the heyday of the Tiananmen Square protest. The HKFS is one of the founding members of the alliance, which spearheaded the protests in Hong Kong and commemorative activities. One of the demands the Alliance has insisted is the building of a democratic China.

Hong Kong no democracy if China is not a democracy

Their aspirations for a free and democratic China aside, many Hongkongers had reacted strongly to the 1989 protest because they knew their fate had become intertwined with mainland China, then and more so after 1997. One of the sayings commonly held by the pro-democracy leaders at that time was: Hong Kong will not have democracy if China does not have democracy.

26 years on, there is no denying more people have resigned to the reality that there is very little, if any, they can do to advance democracy on the mainland. But still, many people feel they are duty-bound at least morally to hold up the candle of hope for a democratic China in the place where they are still free to do so.

This has proved to be controversial. Beijing had branded the Alliance as subversive. Officials warned “well water,” referring to Hong Kong, should not interfere with “river water,” or the mainland.

Former chief executive Tung Chee-hwa had publicly and privately persuaded Szeto Wah, the founding chairman of the Alliance, to disband the Alliance for the sake of better mainland-Hong Kong relations. His predecessors Donald Tsang Yam-kuen and Leung Chun-ying have refrained from doing so.

Even Beijing seems to have accepted the June 4 commemoration as a fact of reality of the complex mainland-Hong Kong relations. 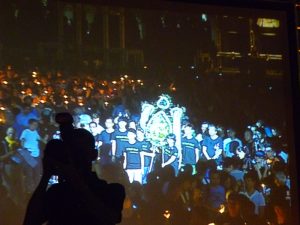 Activists pay tribute to the June 4 victims at a Victoria Park candle-light vigil.

Future of Alliance in doubt

Against that background, it could not be more ironic that the future of the pro-democracy body is now under shadow of a different kind.

Intriguingly, the source of uncertainty stems not so much from the central and Hong Kong governments, but young students and people.

Like the fight for universal suffrage, they feel the “old” democrats under the Alliance have failed to bring any meaningful democratic changes in China. But unlike the Hong Kong democracy battle, they feel increasingly alienated, indifferent and annoyed about the fight for a democratic China. So much so that they want to opt out, arguing that is not their business. Their focus is on a democratic Hong Kong.

On Saturday night, there will still be a big turnout at the candle-light vigil. Many will turn out to show they have and will not forget June 4. The June 4 commemoration may be a thorn in the eyes of Beijing.