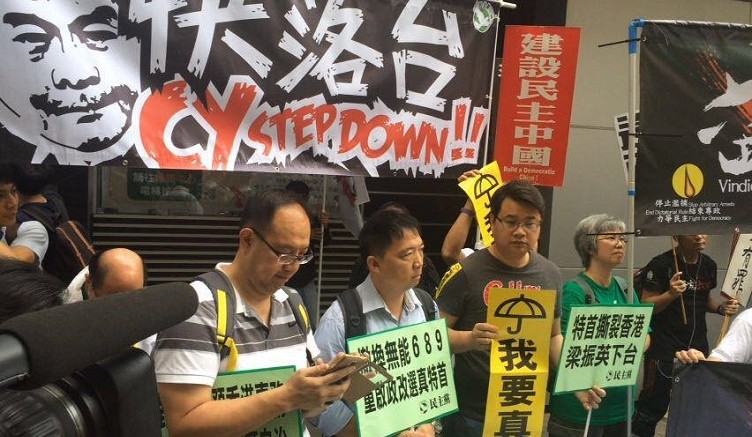 The Democratic Party snubs an offer by the Chief Executive Leung Chun-ying to attend the party's anniversary celebration in February.

National People’s Congress Standing Committee chairman Zhang Dejiang ended his 3-day inspection visit to Hong Kong. All eyes are on his “ice-breaking” (meeting) with four pan-democrats, and whether the central government will continue to use a “carrot-and-stick approach” in dealing with Hong Kong affairs. To better understand Beijing’s thought, we should start with the Fifth Plenary Session of the 18th Communist Party of China held in October last year.

The fifth plenary session laid out a new policy towards Hong Kong, of which “promoting democracy” and “fostering harmony” are highlighted as major tasks. To join that chorus, the hard-styled Chief Executive Leung Chun-ying has no choice but to tune his governance style, in an attempt to minimize social divide.

Sending Raymond Tam Chi-yuen, Secretary for Constitutional and Mainland Affairs to attend our Democratic Party’s anniversary reception in February would be an obvious example of “fostering harmony”. Having banned senior government officials from attending our anniversary reception since 2015, this year, it was C.Y. Leung who said publicly that he would like to attend the event. Unfortunately to him, our party stick to the decision that he would not be invited.

Another example of “fostering harmony” would be putting the controversial copyright bill at the end of the legislative agenda and agreeing not to restart consultation during the rest of legislative term. This rare concession enabled more bills and funding requests to be handled by Legco before its session ended in mid-July, and gave a way out of the political deadlock of filibustering.

The central government also extended olive branch to pan-democrats. Four pan-democratic legislators, Democratic Party Chairperson Emily Lau Wai-hing, Civic Party leader Alan Leong Kah-kit, Cyd Ho Sau-lan of the Labour Party and Joseph Lee Kok-long of the health services functional constituency, have been invited to meet face-to-face with Zhang Dejiang last Wednesday during a pre-dinner cocktail reception. This short meeting is unprecedented as pan-democrats were never on the list to meet with state leader in town. It is also seen as the first ever formal recognition of the constitutional status of pan-democrats.

The pan-democrats’ demand is sharp and simple: remove C.Y. Leung and re-launch constitutional reform. This is the consensus of 22 pan-democrats from various sectors, and the four representatives who attended the reception have made clear our request.

The current situation in Hong Kong has so much to do with C.Y.. He could do nothing but dividing the city.

Let’s take a look at what he has “achieved” since he took up his office in 2012: the city’s deep-root conflict has intensified, infighting goes on and our core values are being threatened or even compromised. His poor leadership triggered calls for Hong Kong independence and self-determination.

Not to mention, C.Y. Leung has integrity problem. Before he was elected, he lied to the people and to the central government about having illegal structure at his home at The Peak. He was accused of corruption that involved a HK$50 million payment he received quietly from Australian engineering firm UGL as part of a deal to take over his old company DTZ. And more recently, he abused his position as Chief Executive and allegedly pressured airport staff to deliver left-behind handbag to his youngest daughter in a restricted area. The sooner he is replaced, the better Hong Kong would be.

Zhang Dejiang said in a speech last Wednesday that Leung and his administration recognized the problems Hong Kong facing, and took effective measures to facilitate social and economic development of the city. He borrowed quotes from a Canto-pop classic “Below the Lion Rock” to urge Hong Kong people to “put aside our discord, pursue our goals together in pursuit of our dream”. He called on support to Leung and his administration and stressed that they were elected in accordance with the Basic Law and appointed by the central government.

C.Y.’s five-year term as Chief Executive will end next year, and it is very likely for him to seek for another term. I wish Zhang Dejiang would realize that keeping him as Chief Executive would not be helpful in resolving problems in the city. Being a bad executor for Beijing’s policy, he has and will cause harm to “one country two systems”. Hong Kong people deserve a better leader, one they elected themselves by genuine universal suffrage.

“Fostering harmony” is the right path for Hong Kong. Just as Zhang Dejiang left the city, real work should begin. Establish a regular communication platform, in way proposed either by our party or Civic Party and listen to voices of Hong Kong people. Re-issue home return permits to pan-democrats that have been prevented from China for many years. And more importantly, replace C.Y. Leung or do not allow him a second term, and re-launch constitutional reform as an ultimate solution to the current conflicts of Hong Kong.

Sin Chung-kai is a Democratic Party legislator representing the Hong Kong Island geographical constituency. This is an edited version of his RTHK Letter to Hong Kong broadcast on May 22.

Be the first to comment on "Hong Kong will be better the sooner C.Y. is booted"