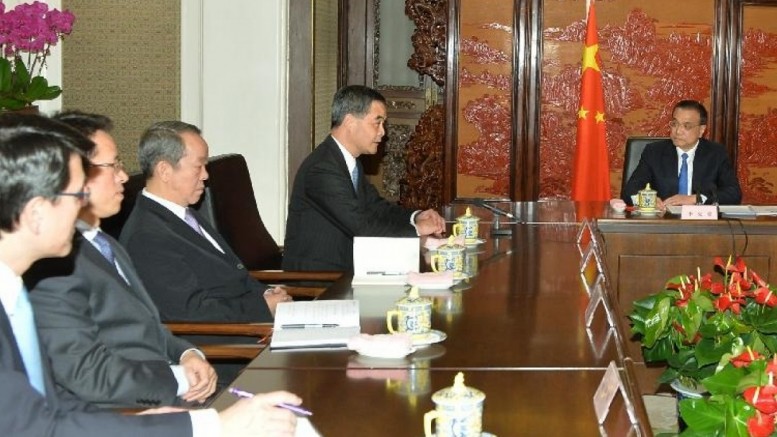 Beijing says the change of seating arrangements at meetings between Hong Kong's Chief Executive and state leaders better reflect the central-SAR relationship. Under the same argument, leaders' trips to the city are now described as "inspection visit."

Loyalists may dismiss it as an over-interpretation of a change of wordings. But the use of the word “inspection (視察)” by China’s official Xinhua news agency to describe the upcoming visit of NPC chairman Zhang Dejiang to Hong Kong cannot be taken lightly.

It is yet another worrying sign of the Beijing leadership magnifying the importance of the principle of “one country” while downgrading the special status of Hong Kong. It raises the question of whether the city will become “just another Chinese city” ultimately as pessimists and sceptics have warned.

Political observers and pundits have good reason to feel something weird when they read a Xinhua report about the visit of Zhang to the city between next Tuesday and Thursday.

The story’s headline says: Zhang will attend the “One Belt, One Road” top-level forum and “inspect” the Hong Kong SAR. Previous reports carried by the official media normally used “visit” or “fact-finding” visit to describe those trips. They include the visits by President Xi Jinping and Premier Li Keqiang to the city in 2008 and 2011 respectively.

The Xinhua report of Zhang’s “inspection trip” to Hong Kong bears striking resemblance to the trips by state leaders to localities, which feature such site visits to industrial factories and ordinary families and, importantly, meetings with local government officials to hear their work reports.

Those trips are aimed to give a two-part message. First, it aims to show the state leaders’ “love and care” for the well-being of people in the localities. Secondly, it demonstrates the relationship between the ruler and the ruled under the unitary state.

To mainland officials, it can only be right to describe the trips of state leaders to the localities as “inspection” as the latter are part of the nation, not foreign country. Plainly put, they are adamant it was wrong to describe those trips as “visits” in the past because that should only be applied to trips to other countries, not to other places within their own country.

Mainland officials have adopted the same argument when they attempted to explain the change of seating arrangements for the meeting between Chief Executive Leung Chun-ying and President Xi and Premier Li during the annual duty visit to Beijing in December.

In a departure from the customary setting in previous meetings, Xi and Li held meetings with Leung and his aides in a conference room at the Zhongnanhai leadership compound. Both Xi and Li chaired the respective meetings at the head of a long conference table. Officials including Leung sat along the table.

In previous talks in duty visits, Leung and his predecessors sat side by side with state leaders in a setting akin to leaders’ meetings with foreign guests such as government leaders. Both Leung and a spokesman for the Hong Kong and Macau Affairs Office said the new seating arrangement was aimed at better reflecting the relationship between Beijing and Hong Kong as stipulated in the Chinese Constitution and the Basic Law.

In a similar vein, mainland officials reckon the reference to Zhang’s visit to Hong Kong as an “inspection trip” accurately reflects the relationship between Beijing and Hong Kong.

The revised reference, however, represents a deviation from the history when the then Beijing leaders adopted flexibility when applying the principle of “one country” in policies and practices. It was aimed to make a special case for Hong Kong to help assure the people their unique systems and lifestyles would be preserved after 1997.

Those special policies and practices range from political system and economic policies to the seating arrangements at meetings between the Chief Executive and Beijing leaders and the descriptions of trips of state leaders to the city.

Xi has pledged the policies towards Hong Kong would not be “deformed.” But from seating arrangements to the reference to Zhang’s trip as “inspection visit,” the changes in the “one country, two systems” policy, at least in terms of semantics and symbolism, could not be more apparent.