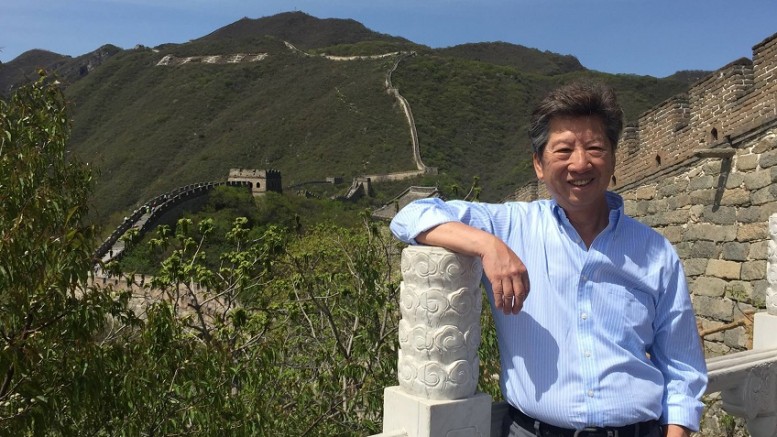 Ronny Tong Ka-wah, founder of the Path of Democracy and a former Civic Party legislator, believes there is a third way to fight for democracy. He recently led a delegation to visit Beijing.

Is it possible that a “middle-of-the-road” line can emerge in Hong Kong politics? The question has been raised in a lengthy article written by Professor Lau Siu-kai, former head of the Government’s Central Policy Unit and a long-time expert on Hong Kong issues. His article is entitled “Why middle-of-the-road is a difficult path to walk?” In his article, the “middle-of-the-road” line also refers to the moderate, ‘third way’ recently proposed by senior counsel and former Civic Party member Ronny Tong Ka-wah, who found the Path of Democracy (民主思路), and the Third Side (新思維) launched by former Democratic Party member Tik Chi-yuen and Wong Sing-chi.

Lau said those political figures who championed the “middle-of-the-road” line believe the political space in the middle would become increasingly wider with the growing polarisation between the establishment force and the opposition camp. That, he said, would be conducive to the rise and development of the moderate political forces. Lau observed that the efforts of the moderates have not yet brought about clear effects.

The rivalry of lines of politics began in the 1970s when district administration reform was launched. Our political scene grew livelier and conflict of political lines fierce following the drafting of the Basic Law Legislative Council election. The then political divide was between the democrats and the conservatives. Their main difference was about the pace of democratisation. Democrats wanted universal suffrage to be held as soon as possible. Conservative proposed elections be held in a gradual and orderly manner. As the two factions locked in dispute, a group of middle-of-the-road advocates called for compromise from both sides for a political reform blueprint acceptable to both sides.

There were so-called moderates in both the then British Hong Kong government and the then Basic Law Consultative Committee. They had tried to narrow the gap between the democrats and the conservatives. They could be described as the earliest batch of middle-of-the-road advocates. Facts showed they had suffered a total defeat. Why?

First, both the democrats and the conservatives maintain they should stand firm on their stance. This is because, after all, the central government has the final say over the compromise blueprint. They asked why they should let the moderates find the compromise. Sticking firm to their stance, they believed, would show to the Hong Kong people they were people with principle and would not easily compromise. To them, doing so would put them in an advantageous position in garnering support in elections. Contrarily, those moderates would only be seen as indecisive and wavering in their stance. Furthermore, the so-called “compromise model” proposed by the moderates did not receive strong support from Beijing. As a result of that, the influence of moderates had gradually withered.

Strictly speaking, the “middle-of-the-road” line of politics cannot be described to a “line” or “path”. They primarily hoped to change the radical views in the democratic camp. Of them, the most important one is the willingness to foster dialogue and not to seek confrontation with the central government. This is perhaps a pragmatic approach. But in the eyes of the public, that has become a political line more about political gesture than substantive content.

Elections in Hong Kong are limited to the Legislative Council and District Council, which are bodies that represent public opinion, not to run the government. The so-called “line” of politics of political parties is in fact the stance they take with no chance of being implemented. Those who advocate extreme views get steady support in the society. Those who promote middle-of-the-road line often give an impression that they are not pragmatic, firm enough, or kind of wishy-washy.

The political reality in Hong Kong makes it difficult for the middle-of-the-road advocates to bring real change in the political climate. It is the case now, as it was in the past.

Be the first to comment on "The ‘third way’ to nowhere"