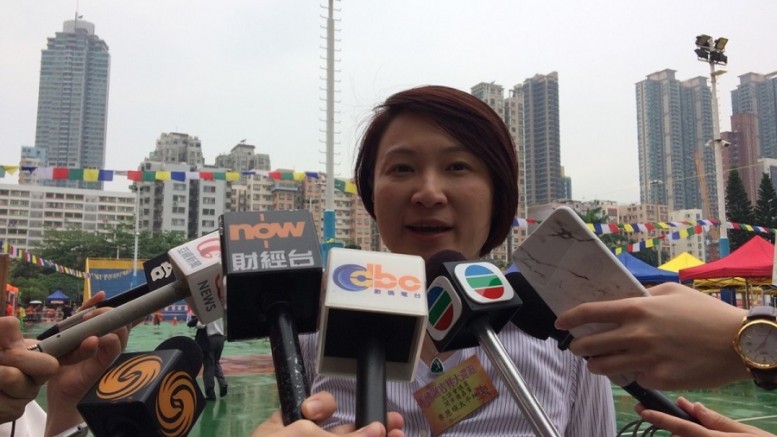 Starry Lee Wai-king, chairman of the DAB, quits the Executive Council, citing heavy workload in the party and Legco. Pundits say it may be linked with the upcoming Legco election.

Amid speculation about the fate of Chief Executive Leung Chun-ying’s re-election bid, the sudden departure of Starry Lee Wai-king, leader of the pro-government flagship DAB, from the Executive Council has poured oil to fire.

For obvious reasons, the rival pan-democrats have claimed Lee’s resignation was a “jump-out from the (sinking) ship,” referring to Leung’s team. Democrat legislator James To Kun-sun questioned whether the Democratic Alliance for the Betterment and Progress of Hong Kong is still “pro-Leung.” The Leung ship, he said, “is falling into pieces.”

Another pan-democrat Cyd Ho Sau-lan said Lee is anxious to sever ties with Leung as the September Legislative Council elections is drawing near.

New People’s Party chief Regina Ip Lau Suk-yee did not comment directly on why Lee quit, but noted that Lee faced heavy workload as party chief and legislator – and a mother.

Lau Siu-kai, former central policy unit head, said it was natural that political forces would be contemplating the idea of fielding their own candidates for the 2017 chief executive election now that Beijing has not yet made up their mind. But he said it is too early to tell whether Lee’s resignation has anything to do with the election.

On its face, speculation about the candidacy of Lee for the top race is not unfounded. Two DAB legislators, Chan Kam-lam and Leung Che-leung, have said on separate occasions earlier the party should contest the election under their own flag. Leung has named two former chairmen, Tsang Yok-sing and Tam Yiu-chung, as potential candidates.

During the Legco New Territories East by-election campaign last month, DAB’s Holden Chow Ho-ding has repeatedly sidestepped a question of whether he backed the re-election bid of Leung.

Those are clear signs showing the DAB has decided to prefer keeping all options open while Beijing remains undecided about their pick for the post of chief executive.

That should not be conveniently taken as an indication that Beijing has already decided to dump Leung. however. Even if that is the case, it is only sensible and politically wise for Beijing to keep it in wraps to avoid Leung from becoming a lameduck.

Lee unlikely to run for CE

But in view of the widespread discontent from different segments including the loyalists towards Leung, it should not be a surprise that Beijing would prefer leaving more options open, at least at this stage.

By doing so, it is hoping to send a clear message to potential candidates who are acceptable to Beijing for them not to rule them out from the race so that there will be more choices available when needed.

Though groomed as a leading figure in the SAR ruling team, Starry Lee is still being seen as a lightweight compared with her two predecessors Tsang and Tam. It looks unlikely she or any other party members would run for the next CE election.

That said, Lee’s resignation and the appointment of a party vice-chairman Ip Kwok-him as a replacement Exco member shows the DAB is anxious to keep a distance from Leung ahead of the September Legco election.

This is aimed to minimalise any adverse negative impacts on the DAB candidates caused by the party’s close affiliation with Leung.

Despite a seemingly rethink in Beijing on Leung’s candidacy, he is no doubt still leading the peck of possible candidates.

Coming in the midst of rumours about a hunt for more candidates in Beijing, the resignation of Li could be seen as a move by the party to distance themselves from the Leung administration.

In view of the profoundly complicated implications, the chance of DAB fielding their own candidate to contest the next CE election seems to be low. But even if they have decided not to do so, they may adopt the same strategy in keeping a distance with Leung in his much-anticipated re-election bid.

It won’t take too long to find out whether Lee was telling the truth or half-truth, if not lies, when she insisted she stood down from Exco for more time on her party and Legco work.