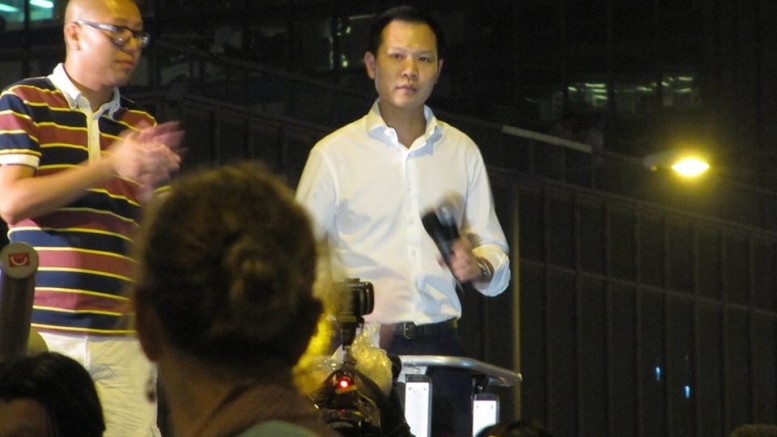 Civic Party lawmaker Dennis Kwok fears the missing of bookseller Lee Po is indicative of the erosion of the core principles of 'one country, two systems'.

Lee Po’s disappearance has occupied the city’s headlines for weeks, as Mainland China’s tacit efforts to undermine the freedom of speech abruptly escalated to this blatant abduction of a book-seller back to the mainland last December. This came as both a surprise and a blow to Hong Kong citizens, proving to those who once believed that Hong Kong could retain much of its autonomy were probably wrong. In the face of such an outright violation of the ‘one country, two systems’ principle which has governed the relationship between the city and its sovereign for nearly 20 years, it is highly unlikely that this contravention will be the last.

In hindsight, the exacerbation and deterioration of the Mainland-Hong Kong relationship was gradual. The Chinese government has always meddled with party politics within the city: recent years have witnessed an increasingly stubborn and brazen pro-establishment alliance that supports almost every policy decision which clamps down on various types of freedoms or is economically favourable to the sovereign while being at Hong Kong’s expense. The current administration is equally populated by figures closely linked to the Chinese government, who more often than not protect Mainland Chinese rather than Hong Kong interests. The State Council White Paper on “one country, two systems” policy in 2014 marked another attempt of increased control over Hong Kong, in which the NPCSC instructed the rulers of Hong Kong to love the country and to be patriotic to China among other statements which affirm China’s authority over Hong Kong’s affairs.

Yet the Lee Po episode was particularly alarming due to its deviation from the “one country, two systems” principle which has so long served as the basis of the city’s thriving autonomy, and the far-reaching aftermath that may flow from this. Under the principle, the “two systems” component entails separate and different rules, laws and procedures for the Mainland and Hong Kong, and the implementation of this fundamental principle necessarily requires the respect of both sides towards each other’s rules.

The disappearance of Lee Po and the subsequent revelation that he has been taken back to the Mainland, has however completely dismissed and ignored the existing system in Hong Kong. Bypassing the immigration laws and procedures for traveling between Hong Kong and China, Lee Po was able to avoid the monitoring processes of the Hong Kong authorities and travel across borders without using his home visit permit, implying that there may have been Mainland officials in Hong Kong attempting to enforce Mainland laws. Not only does this severely undermined the credibility of the “one country, two systems”, as the boundaries between the two systems become blurred if not non-existent; this is also a challenge to the rule of law and judicial independence in Hong Kong. Freedom of speech, press and the person are among key human rights protected in the Basic Law, while having jurisdiction over Hong Kong citizens is a power conferred to the local courts, essential for the functioning of a strong and independent judiciary. Yet all these core values of the city are at once undermined and subverted. More importantly, such transgression of Hong Kong laws and procedures undoubtedly gives rise to the speculation that as the sovereign, China believes that it is free to do as it pleases. This depicts a much more gloomy future for Hong Kong, foreshadowing heavy-handed interference from China to come.

Amidst this deep-seated feeling of unease, the so-called “fishball riot” further plunged the city into apprehension. If Lee Po’s disappearance is alarming because of China’s tightened grip on Hong Kong’s internal affairs, then the “fishball riot” is telling of the frustration towards the increasingly narrow scope of life in Hong Kong, where resources are often utilized to oppress, rather than facilitate the livelihood of Hongkongers. Regardless of whether the rioters’ actions were right or wrong, the incident revealed a strong sense of dissatisfaction, to the extent that the participants believe that an escalation of their actions is necessary and even, the last resort to pressure the current administration into listening to their demands.

It is only possible to live in Hong Kong as a Hong Kong person without fear if the legal and judicial safeguards of our system are stringently upheld and respected: Hong Kong citizens are only and can only be subjects of our own system, and must not be subjected to Mainland Chinese law enforcement and definitely not Mainland Chinese laws. If a Hong Kong person can be abducted back to Mainland China and be held liable for violations of national law, then any one of us can suffer the same fate. It is therefore imperative to follow the development of the matter closely and continue to press the administration to demand a more detailed explanation from the Chinese government. The worst we can do is to give the impression that a violation of the “one country, two systems” principle is permissible and inconsequential.

At the same time, respect for the legal and judicial framework must be complemented by good governance. There are clearly legitimate demands from the public that the current administration has failed to address, and we all know that simply condemning the rioters is not going to yield any constructive results. Ultimately, the conflicts which underlie the Hong Kong society can only be resolved if the current administration takes the society’s demands seriously, and demonstrates some willingness and sincerity to address the problems. But before that happens, it will be our role to defend Hong Kong and its values.

Dennis Kwok is Civic Party legislator, representing the legal functional constituency. This is an edited version of his Letter to Hong Kong at RTHK broadcast on March 13.

Be the first to comment on "‘One country, two systems’ pledge fears missing in Lee Po case"