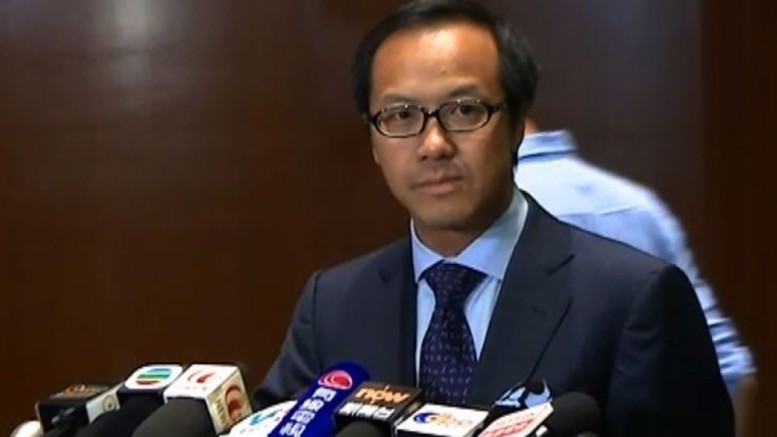 Legislator Kenneth Leung, who represents accountants, likens the government's decision not to set up an inquiry on the Mong Kok 'riot' as 'ducking oneself under the sand.'

Hundreds of people including reporters, innocent passers-by, citizens and policemen were hurt the violent disturbance in Mong Kok on the first day of the Chinese New Year. Violence should not be tolerated or condoned in a civilized society.

Chief Executive Leung Chun-ying was quick in jumping to the conclusion that the incident was a “riot”. In a strict legal connotation, those who were involved in the attack of policemen or civilians during the Mong Kok incident can be charged with the crime of participating in a riot under our Public Order Ordinance if they were participating in an unauthorized assembly and that there was a breach of peace.

Labeling an incident as a riot will have much deeper political and social connotation and implications. A “riot” is not merely a term to describe the conduct or behavior of those participating in an assembly. As Martin Luther King Jr once said, “a riot is a social phenomenon”. On another occasion he said, “a riot is the language of the unheard.” What is the political or social causes of the incident? Are there people in Hong Kong who we have neglected or who felt oppressed and we have not listened to them?”

Some of us may believe that more arrest, prosecution, sentencing and suppression will fix the problem once-and-for all. Some may believe that better police intelligence and better deployment of equipment and tactics by the police may have nipped any disturbance in the bud. Strong measures may work in the short run, but without finding and tackling the deep-rooted social and political causes of the issue, more disturbances and unrest will come back time and again.

In the past few days, thousands have signed up a petition initiated by 30 leading academics and professionals in this city to call for an independent inquiry committee to be set up by the government to look at, amongst other things, the cause of the Mong Kok incident and to recommend both short term and long term solutions to prevent the occurrence of similar incident. This committee, which may be chaired by a senior judge or other prominent and independent figure, will have a totally different mandate from the review committee to be set up by the police to review police operations during the Mong Kok incident. Neither would the committee be or seen to be impeding any criminal investigations and trials going on as it will not be looking at individual cases but will be concentrating on the macro issues which may help explain why a certain sector of our society is so infuriated.

To my surprise and dismay, certain staunch supporter of the government have already objected to the idea as they claimed that the committee may open up a Pandora’s box and start a new battle ground. They thought the government should avoid doing anything. Is that a correct attitude? Will the real problem go away by ducking oneself under the sand? Even if the committee opens up a new battle ground, it will be a battle ground for reasoning, ideas and solutions. If there had been a “riot”, no responsible and accountable government can avoid probing the problem to the bottom and finding a right solution.

You have been often telling me how wonderful your city-state is and how Hong Kong is compared with Singapore. I do think, this type of comparison is getting meaningless these days as the two places have drifted apart. Singapore has a parliament elected by universal suffrage, a prime minister and a ruling party voted in by all your people. We have none of these – we have a pseudo democratic system – a system with great uncertainty and which may expire by 2047.

Nonetheless, I have faith in Hong Kong and the people of Hong Kong. We may make mistakes now and then, but I hope we will learn from them. No one other than the people themselves will know what is best for them – but only if those in power will listen to the people!

Kenneth Leung is a Legislative Council member, representing the accountancy functional constituency. This is an edited version of his Letter of Hong Kong to his cousin, who lives in Singapore, broadcast at RTHK on February 21.

Be the first to comment on "Mong Kok inquiry can be battle ground for reason, ideas, solutions"