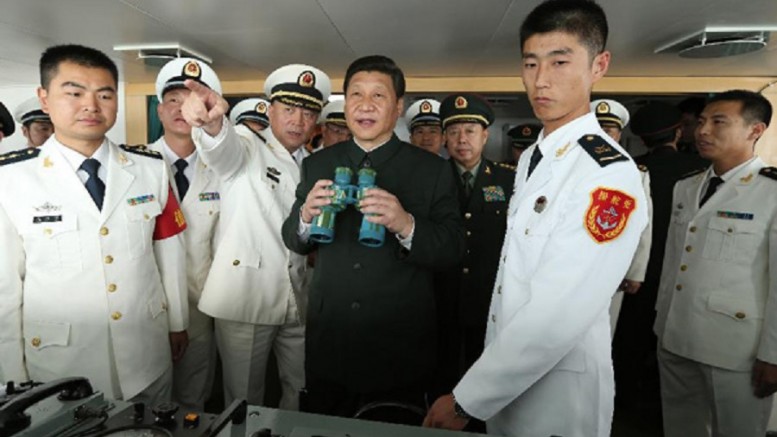 Xi Jinping inspects at the Guangzhou military theater of operations of the PLA on December 8, 2012.

It is a standard policy of authoritarian regimes to divert the attention of its disgruntled citizens by engineering a foreign crisis. Beijing considers Taiwan issues as “domestic ones”; but this will not deter the Xi Jinping administration from using a “crisis situation” on the island to stoke the flames of Chinese nationalism.

After the historic win of the Democratic Progressive Party (DPP) at the presidential and legislative elections on January 16, no Politburo-level officials in Beijing have responded to the fast-changing political landscape on the self-ruled island.

The official Chinese media, however, has run hardline comments by a few People’s Liberation Army (PLA) generals who threaten to use force to “liberate the breakaway province” if pro-independence forces were to rear their head. Major-General Luo Yuan, who is well-known for his incendiary views, wrote in an article in the hawkish Global Times that “if pro-independence elements in Taiwan were to push us to the wall, we have no choice but to resort to ‘military unification’.”

On January 21, the CCTV broadcast footage of the PLA’s 31st Army based in Fujian Province undertaking exercises including taking over islands. Moreover, the PLA’s Cyber-warfare division has become more active in targeting major Taiwan sites including the office of president-elect Tsai Ing-wen.

The CCP administration’s position on the DPP’s outsized victory is that issues in Taiwan can only be decided by 1.35 billion Chinese. From this perspective, the 6.89 million votes garnered by Tsai means very little in a nation of more than 1 billion people.

The night of the election, Beijing’s ministerial-level Taiwan Affairs Office stressed that Beijing would continue to work with political parties and individuals in Taiwan who accepted the “one China principle.” Since Tsai and other DPP leaders have refused to recognize the 1992 Consensus (Taiwan’s version of the one-China principle), this means that Beijing will continue to spurn the choice of the Taiwan people.

Beijing will likely use both economic and military means to put pressure on the Tsai administration – and on Taiwan in general. The Taiwan economy grew by just one percent in 2015. Beijing is in a position to squeeze the Taiwanese economy using any combination of the following tactics: a) reduction of imports, especially agricultural ones, from Taiwan; restricting the number of mainland tourists going to Taiwan; slowed-down implementation of cross-Straits economic cooperation agreements; and preventing Taiwan from joining regional trade agreements.

However, Beijing will continue to encourage both state-owned and private enterprises to invest in key Taiwan sectors, e.g., IT, finance and the media. Such investment serves the purpose of ensuring the mainland’s indirect control over the Taiwan economy.

The PLA will continue – and may even upgrade – its war games along the Taiwan coast opposite Taiwan. Such military threats could escalate if after taking office in May, Tsai or her top officials were to say things or initiate policies that Beijing considers provocative. The PLA may even engineer “accidents” or “near-accidents” including ordering its jetfighters to cross over the “middle line” in the Taiwan Strait.

While in normal circumstances, international observers might expect a brief honeymoon period between the Xi and Tsai administrations, the dicey state of the Chinese economy could predispose the Xi leadership to use the “Taiwan card” to divert the attention of China’s increasingly dissatisfied lower classes. The latter include the great majority of China’s 90 million retail investors who have lost big money on the Shanghai and Shenzhen stock markets.

This is despite the fact that Tsai, a professional trade negotiator, has re-emphasized her peaceful mainland policy: “preservation of the status quo, no provocation and no accidents.” However, the bad news for Taiwan is perhaps that Xi will not tolerate the perpetuation of the status quo.

Taiwan’s “deliberate procrastination [of reunification talks]” has been defined by hawkish Taiwan policymakers in Beijing as equivalent to seeking de facto independence.

Moreover, during his historic meeting with President Ma Ying-jeou in Singapore late last year, Xi made it clear that he did not want to “leave the Taiwan issue to the next generation.” The final resolution of the Taiwan problem has become part of the Chinese dream that Xi has invoked so often. While it is not probable that Xi will announce a deadline for national reunification, it is likely that he and his successors will want to achieve it not too long after the celebration of the centenary of the CCP’s establishment in 2021.