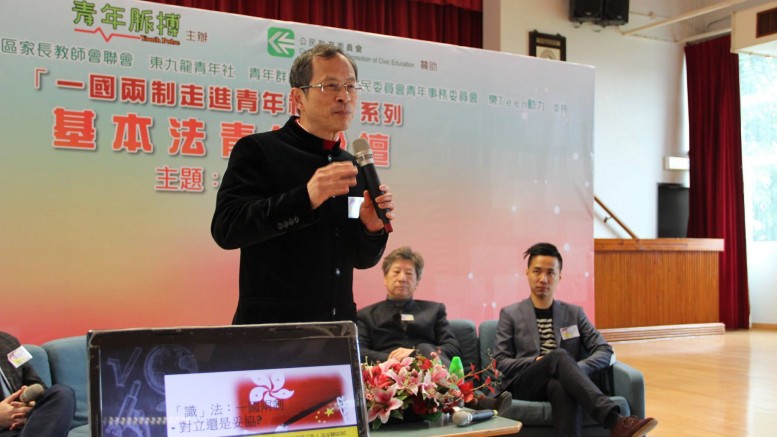 He said Hong Kong should “bravely activate those provisions that are asleep” and fully establish and perfect the mechanisms and systems in the Basic Law.” Professor Wang is a Chinese legal expert, authority in Basic Law studies and head of the legal affairs department in the central government’s office in Hong Kong. His views cannot be ignored.

In his article published in the Bauhinia Monthly magazine last month, Professor Wang did not say which provisions in the Basic Law are in sleeping mode. People can easily think of Article 23. The Hong Kong Special Administrative Region has been established for more than 18 years. The present administration is the fourth and the present chief executive the third since then. But the requirement for Hong Kong SAR to legislate on its own to safeguard national security under Article 23 has not yet been fulfilled.

Professor Wang said: “Hong Kong has returned to the motherland for 18 years. It is said that time is not ripe for a lot of things to be done. So when is time ripe? We always say we should take into account the overall situation. so what is the overall situation? The overall situation requires full implementation of the Basic Law.” It seems that Wang is making a rebuke of the argument that now is not the appropriate time to enact a law on Article 23.

It is understandable that Professor Wang, who is one of the “custodians” of the Basic Law, is unhappy with the delay in enacting Article 23. Not too many people in Hong Kong and the central government, however, would believe that enacting a national security law will be conducive to resolving the city’s deep-seated conflicts and improving governance.

Provisions in the Basic Law that are still “asleep” probably include Article 28 (about the declaration of a state of emergency in Hong Kong), Article 73 (9) (Legislative Council impeachment against Chief Executive) and Article 159 (amendment of the Basic Law). Whether or not those or some other “sleeping” provisions should be invoked boils down to the same question: is it good for governance?

More interesting is Professor Wang’s view that some important systems are still not yet established. He has also not explained what they are, nor why it is so. (Is it because the present and previous administrations don’t want to do it? Or because they can’t do it?) Wang said the development of democracy, economy and social stability in Hong Kong will be quite different if those important systems laid down in the Basic Law are fully in place and implemented.”

The governance of Hong Kong has slipped into an abyss. People are looking forward to hearing from Professor Wang what are the important systems waiting to be set up which can magically solve Hong Kong’s troubles.

Tsang Yok-sing is President of the Hong Kong Legislative Council. This is a translated version of his regular column published in Chinese-language AM730 on January 21.