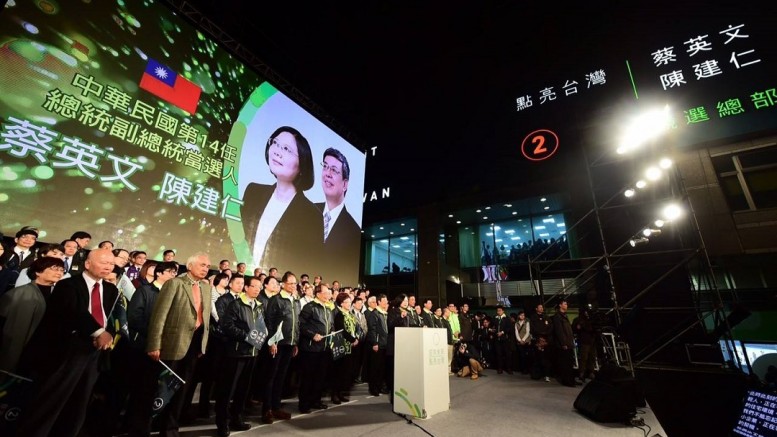 Tsai Ing-wen, Taiwan's president-elect, leads his campaign team to express gratitude to supporters in a post-victory rally on Saturday.

The contrast could not be more ironical and sharper.

In Taiwan, Tsai Ing-wen, who held back tears to tell her supporters not to give up after losing the 2012 presidential election four years ago, made a stunning political comeback on Saturday. Snapping up 6,894,744 votes, she made history to become the first woman president in Greater China. At a post-victory rally, she told supporters to welcome the beginning of a new era in Taiwan with happy mood. Supporters shouted: “President Tsai Ing-wen, light up Taiwan.” “We win, Taiwan wins.”

In Hong Kong, the community mood is downbeat, soured by feelings of disappointment and anger with their leader, namely Leung Chun-ying. Leung, whose popularity has consistently stayed at a low level, broke another record, in its negative sense. His just-delivered Policy Address, his fourth since coming to power in 2012, is voted the most unpopular blueprint of its kind in a HKU poll since it was conducted in 1999.

At a post-policy address radio programme, Leung claimed he would have been elected four years ago if the top post was returned by universal suffrage, just as he grabbed it in a secret ballot by a panel of 1,200 members, most of whom friendly to Beijing. He argued he was most popular among the three candidates. The other two are Henry Tang Ying-yen, formerly financial secretary and Albert Ho Chun-yan, a former chairman of the Democratic Party.

Strictly speaking, Leung is right. Opinion polls conducted during the campaign show he was ahead of his two rivals. The truth is, however, the list of candidates would not have been the same if more than three million eligible voters could vote.

Interestingly, Leung’s claim has been greeted by an air of eerie silence, even among his harshest opponents. At a post-address question session at the Legislative Council, pan-democratic lawmaker Cyd Ho Sau-lan has resigned to the reality that there is little point calling Leung to step down. Leung’s term will end in 17 months. She pleaded him to do his fellow citizens a favour telling them he will not seek re-election.

Ho’s call was echoed by some callers at a radio phone-in programme on Thursday. One male caller told Leung: “I don’t care whether you will run again, I just want you not to run again. Just don’t do it.”

His feeling of desperation and helplessness is shared by a good number of Hong Kong people, who are watching with envy mixed with inferiority when Tsai’s vow to defend democracy and autonomy of Taiwan received thunderous applauses from the crowd.

Beijing’s hardened stance on Hong Kong on issues such as universal suffrage and the principle of “one country” in the past few years has fed fears. The mysterious disappearance of Lee Bo, an owner of a bookshop, which sold books critical of the Beijing leadership, has deepened fears about mainland authorities having carried out duties in Hong Kong, undermining the city’s autonomy.

And as Taiwan marked its 20th anniversary of “one person, one vote” for their president with the third round of change of power among political parties, Hong Kong has stuck in its democracy journey.

The growing jitters about Hong Kong’s democracy and autonomy since 1997 have provided a bad example to the Taiwan people, who became more resistant against reunification. Meanwhile, the vibrancy of Taiwan’s democracy and “localism” movement has provided a source of inspiration and positive strength to Hong Kong’s pan-democratic camp.

Admittedly, tThe “change of heaven” in Taiwan on Saturday will not bring about drastic change in Beijing’s relations with the island, at least in the short-term, or even medium-term. It also sounds remote that the ascendancy of the Democratic Progressive Party to power will have repercussions on mainland-Hong Kong relations.

But profound change is in the air.

The past few days saw two Taiwanese capturing the hearts and minds of people in the island, Hong Kong and the mainland, in particular in cyber-world. Tsai aside, the ordeal of 16-year-old singer Chou Tzu-yu, who was forced to apologise for waving a Taiwanese national flag on a TV programme in South Korea, has boosted a sense of togetherness among people in Hong Kong and Taiwan.

Meanwhile, Leung has failed to salvage his sagged popularity through his annual blueprint. The contrast between the tally of 689 votes he received in the 2012 chief executive election and the 6,890,000-plus votes Tsai gained has become a subject of ridicule among Leung’s critics and opponents and embarrassment for Beijing.

Taken together, the developments unfolded in the city and Taiwan are a sharp reminder to Beijing about its growing difficulty in managing relations with the two places.