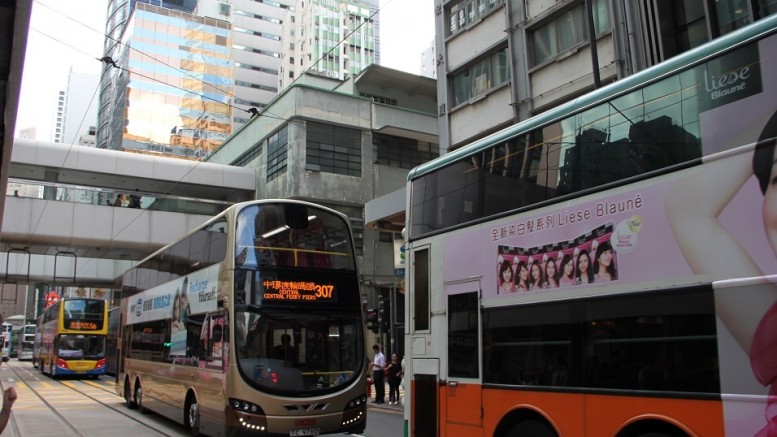 The Government is conducting public consultation on the introduction of electronic road pricing system in selected areas in Central.

It is encouraging to hear air quality has improved gradually over the last five years. Such improvement is the combined result of several air pollution reduction plans, new and tighter regulations on fuel quality, and financial incentive schemes that were rolled out in the last few years. In this respect, the Government is making steady progress, and should be commended.

Hong Kong’s air quality, despite recent improvement, still often falls short of Hong Kong’s Air Quality Objectives (AQOs), and is much worse than the standards recommended by the World Health Organization. It is therefore important that the Government will proceed with the review of the AQOs this year. We demand a clear timeline for the undertaking and the completion of the review, as the sooner Hong Kong tightens the AQOs, the stronger the drive for further air quality improvement.

On ship emission control, we applaud the Government’s commitment in strengthening co-operation with the Mainland, in particular in designating an emission control area in Pearl River Delta waters, and other efforts to reduce marine vessels emissions. Given the fact that Shenzhen has already rolled out an incentive scheme last year to encourage fuel switch at berth and the use of onshore power, and the Ministry of Transport of the Chinese Government also announced a plan to experiment Pearl River Delta, Yangtze River Delta and Bohai Bay as emission control areas, it is important for Hong Kong to take a proactive role and participate in these regional and national initiatives.

We welcome the Government’s plan to tighten vehicular emissions standards to Euro VI for newly registered vehicles. For in-use vehicles, the urgent need for the Government to review and improve Hong Kong’s inspection and maintenance programme for different types of on-road vehicles as a means to improve roadside air quality. Efforts should be made to extend roadside screening of in-use vehicle to cover diesel vehicles. Mandatory registration scheme for both mechanics and workshops should be implemented. Financial and human resources should be provided by the Government to improve and support mechanics training and continuous professional development.

We in principle support the promotion of electric vehicles, but have always argued that the key focus must be placed on heavy-duty, commercial vehicles such as buses, as the emission reduction benefits of electric buses will be much greater than electric small cars. It is therefore heartening that the Government is taking a focus on public transport, and planning trial runs of electric buses. Nevertheless, the Government must look for ways to address roadside emission problem through both end-of-pipe and planning/traffic demand management solutions. While the Government is now undertaking a consultation on electronic road pricing, very little was mentioned in this policy address about other measures to reduce road-based traffic, other than bus rationalisation.

We welcome the commitment to ban the import and export of elephant hunting trophies and to strengthen enforcement and take actions against the smuggling and illegal ivory trade. It is the right first step to tackle a wider issue – wildlife trade in Hong Kong. We urge the Government to take a broader perspective when addressing wildlife trade, that is to go beyond ivory, as the illegal trade of iconic species of elephant ivory is well known, but it is believed that illegally-sourced marine products for example, are also prevalent.

More importantly, despite the fact that Hong Kong is a signatory party of the Convention on International Trade in Endangered Species of Wild Fauna and Flora (CITES), CITES only covers a fraction of species that need protection (usually until the species are at greatest risk of extinction). The Government should consider taking actions to also explore solutions to the trading of species that are on an extinction trajectory. Hong Kong’s current wildlife trade laws contain no provisions to limit the trade of endangered species that are not on the CITES list.

We welcome the Government’s action of having the Chief Secretary chair an inter-departmental committee to steer and coordinate the relevant implementation work. The Climate Change Report 2015 published last November outlines the joint efforts of different government departments and other stakeholders in responding to climate change. We see the importance of setting long-term carbon intensity reduction targets for post-2020 regime and charting the way to achieving it. We would like to highlight the importance of formulating a holistic and sustainable energy policy for Hong Kong and a clear roadmap is needed for such formulation.

We welcome the various measures announced to improve Hong Kong’s walking environment. As Hong Kong is an ageing society, it will become necessary to provide more accommodations for elderly people in the urban environment, which is why we support measures to expand barrier-free access on pedestrian walkways, increase pedestrian green signal times at traffic intersections, provide more seating at municipal and recreational venues, and to encourage developers to provide a safer and more pleasant environment for the elderly. These measures will not only benefit the aged, but all age groups. However, improvements in the public realm should not be limited to government venues and private developments, many of Hong Kong’s streets and pavements are challenging environments for the elderly and other mobility-impaired people to navigate due to congestion, uneven paving, detours, and pedestrian-vehicle conflicts. More efforts should be made to identify suitable locations for pavement widening, public seating, pedestrian crossing improvement and traffic calming. The Government should also consider implementing a 30 km/h speed limit in urban areas with heavy pedestrian flows.

We welcome the pilot scheme to waive land premium to enable landowners to construct pedestrian walkways between buildings in accordance with the planned pedestrian network. These premiums have been an obstacle to achieving coherent and legible pedestrian footbridge or subway networks, forcing pedestrians to make level changes and detours.

We welcome the intention to continue fostering a pedestrian- and bicycle-friendly environment in new towns and new development areas, but more details are necessary. We are concerned about the planning of high-speed roads with inadequate pedestrian crossings or poorly-located footbridges in new town locations in the past, which has resulted in dangerous jaywalking behaviour and an elevated risk of accident.

We also urge the Government to take this window of opportunity to support and implement the Des Voeux Road Central pedestrianisation initiative proposed in 2014 by the Hong Kong Institute of Planners and its partners. This would be a bold way for Hong Kong to reduce exposure to air pollution, create a vibrant public space, raise the quality of life, promote urban creativity and innovation, and put Hong Kong on the map as a leader in urban design.

While not mentioned in the policy address, we also support the recent announcement to carry out public consultation on electronic road pricing (ERP) in Central district. We have long supported better demand-side management of traffic and welcomes progress on this issue.

While sport and culture received some attention in the policy address, it was unfortunate that public open space received virtually no mention. World cities such as Paris, London and New York City have placed a strong priority on greening and improving the public realm in order to raise the quality of life. However, in Hong Kong, it is frequently treated as a bureaucratic exercise. We call for more vision and leadership on expanding and enhancing Hong Kong’s open space as a whole.

Notably, it was especially disappointing that there was no mention of the proposed new Harbourfront Authority.

Moreover, the public is increasingly demanding more diverse and vibrant open spaces with multiple usages, such as waterfronts, urban squares and pedestrianised streets. In order to deliver and programme such spaces, there should be an overall public space coordinator to manage collaboration between the Leisure and Cultural Services Department and other government departments such as Planning, Transport, Highways, and Food and Environmental Hygiene, as this is necessary to overcome complex jurisdictional and regulatory hurdles. The Energizing Kowloon East Office has had some success with this model in the upcoming second central business district in Kwun Tong, and this approach should be extended to other districts.

We support brownfield development as compared to rezoning greenbelts, developing country parks, and harbour reclamation, brownfield development has the lowest environmental impact. We therefore welcome the announcement that the Government is stepping up ways to relocate brownfield operations such as container storage into multi-storey buildings in order to release the land for development.

However, brownfield development should occur as part of a coordinated sustainable development strategy and not a scattershot effort to find as many housing sites as possible. Taking a site from land sale or tender to completion requires at least five to ten years. Downplaying environmental, infrastructural and planning impacts in order to construct housing will not relieve the short-term housing crunch and will have long-term negative consequences.

On heritage conservation, we think that the incremental measures announced are a good step forward, but that on the whole the issue is not being treated with sufficient urgency. While it is welcome news that twelve owners of heritage buildings have agreed to conserve their buildings, the loss of Wan Chai’s Tung Tak Pawn Shop in 2015 is a reminder that time is running out for Hong Kong’s remaining heritage buildings.

It is disappointing that there is still no action to provide legislative protection for graded historical buildings that are not declared monuments. Administrative grading offers no formal protection. We urge the Government to take action quickly before more irreplaceable buildings are lost. Clear rules must be accompanied by appropriate support in terms of technical advice, financial incentives and subsidies.

The Government should furthermore consider bolder measures, such as a system of transferable development rights (TDR), to incentivise the preservation of heritage buildings.

Based on a recent report prepared by the Lantau Development Advisory Committee, the Chief Executive announced in this policy address the Government’s vision in future development on Lantau Island. Public consultation will be conducted in the first half of 2016. Irrespective of the scale and detail for Lantau development, we urge the Government to first undertake a strategic environmental assessment for the whole Lantau development plan, as such plan will undoubtedly pose significant site-specific and cumulative impacts on the environment. This is the best way to identify at the early stage of planning all the potential environmental and sustainability impacts of such plan, to address cumulative environmental impacts that cannot be fully addressed by environmental impact assessment of individual projects, and to look for ways to avoid, minimise and mitigate these impacts, so that policy makers will make informed decisions.

Hong Kong remains one of the very few jurisdictions in the world that still has no archive legislation governing how the city manages its public records. It is disappointing that the Government has not prioritised this issue on its agenda and no process has been made in the past year. We emphasise that mandatory guidelines are not a replacement AND cannot be treated as a substitution of a piece of archive legislation (i.e. with legal backing). Hong Kong has waited long enough and the Government’s inaction in this important area is unacceptable.

Despite the Government has stated in the policy agenda that the Government will continue with the review of the small house policy (SHP) and overseeing its implementation and related matters, we find it disappointing that there has been no progress in this important issue. The SHP is more than issues related to indigenous people’s right, but also land and housing issues, and liveability, which are of people’s top concern today. With the recent court case, the subsequent discussions in the society, and the research we have conducted over the past decade, we expect the Government to speed up the review and update the public about its review work in 2016.

This is an edited version of independent think-tank Civic Exchange’s response to the Chief Executive’s 2016 Policy Address.