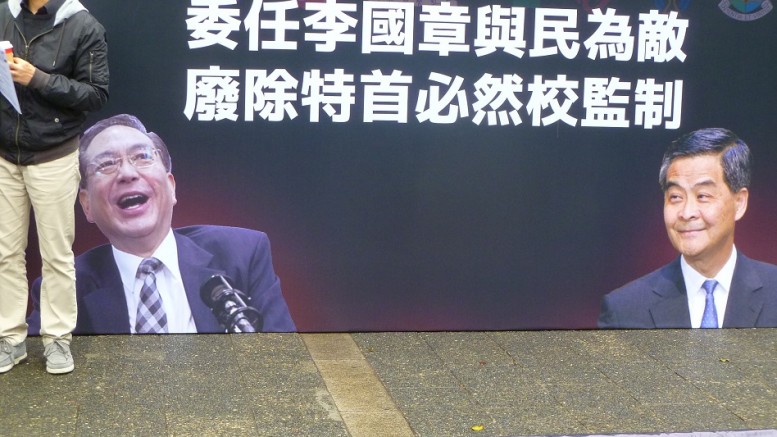 Just before Christmas, Chief Executive Leung Chun-ying paid a duty visit to Beijing to brief the Central Government on Hong Kong’s recent economic, social and political developments. He was obviously eager to know how his governance in 2015 had been rated by the state leadership.

There were two things that caught my attention. The first was the manner in which Leung had been seated when he met with President Xi Jinping and Premier Li Keqiang. Unlike the arrangement in the past when Hong Kong’s Chief Executive always sat side by side with state leaders on similar chairs, with a table between them, Leung was made to sit to the right of the host who sat at the head of a long conference table.

The other significant matter would be President Xi’s statement made during that part of his meeting with Leung open to media that there had been “some new circumstances” in the implementation of “One Country, Two Systems” and that the issue had been debated in both Hong Kong and amongst the international community. Xi stressed the Central Government would not waver on the implementation of the principle, and would ensure that it was not distorted and continued along the right path. Xi also asked Leung to “fight for development, stability and harmony” in Hong Kong.

Having talked about “some new circumstances” and put Leung in an unequivocally subordinated position, President Xi is expected to walk his talk before too long. When Xi does so, we shall know better what he meant by “the right path”.

I hope Xi finally came round to realizing that the Chinese Communist Party and the Central Government had let Hong Kong and its people down by the publication of the White Paper by the State Council on 10 June 2014 and the Resolution of the National People’s Congress (NPC) Standing Committee passed on 31 August 2014. The White Paper completely shattered our hopes, based on promises made to us by the state leadership since the time of the Sino-British Joint Declaration, that our sovereign will exercise self restraints when using powers in its dealings with Hong Kong. Without such self restraints, the NPC, being at the apex of People’s Democratic Dictatorship practised over the Mainland and is therefore all mighty, could theoretically come down on Hong Kong as tons of bricks, so that nothing will be left of our core values and institutions. Should that come to pass, it will not be just Hong Kong that suffers, but the whole of China. With Hong Kong becoming just another ordinary Mainland city, we can no longer play the unique role in contributing to the country’s modernization, both politically and economically, during the past one and a half centuries.

The NPCSC resolution of 31 August 2014 made it impossible for Hong Kong to have a real choice of candidates for the Chief Executive from the rival camps. Without a government that is fully accountable to the people of Hong Kong, the freedoms we are enjoying and the Rule of Law and other institutions that protect us will be like written on water and there will be no guarantee they will be here to stay. The resolution not only harms Hong Kong, but makes China untrustworthy on the world stage.

It has been because of Hong Kong people feeling the threat that we might be losing our core values and institutions that have fueled the localism movement and booing of the national flag when Hong Kong played against the China team during the 2018 World Cup qualifier matches.

I hope President Xi will take his lessons from history when he seeks to correct distortions arising out of implementation of the Basic Law. When the people has awakened and is making reasonable demands for delivery of what has always been promised us, the only right thing to do is to go back to where we all came from and act according to the Joint Declaration and the Basic Law.

As depicted in Alexis de Tocqueville’s book entitled The Old Regime and the French Revolution, the revolution could have been avoided had the king, aristocrats and vested interests heeded the demands of the French people much earlier. It is not too late now for President Xi to once again affirm the importance of Hong Kong in contemporary Chinese history, and use Hong Kong as the key to open the door for China to becoming a really well-respected member of the international community.

Just as I was signing off this letter, the news came that CY Leung finally gazetted his appointment of Arthur Li as the Chairman of the Council of the University of Hong Kong. This was despite the overwhelming objections from academic and administrative staff, students and alumni. Such objections are well grounded on solid evidence of Li’s hostility towards HKU, its academic staff and students. What he had said and done from the days when he had been the Vice Chancellor of the Chinese University of Hong Kong, then the Secretary for Education and as recently as his appointment as a member of the HKU Council not too long ago in preparation for his chairmanship lead any reasonable person to the inevitable conclusion that Li and HKU are irreconcilable and cannot live under the same roof.

CY Leung’s insistence on Li’s appointment could mean nothing but harm to HKU, and institutional autonomy and academic freedom enjoyed by tertiary institutions in Hong Kong. To convert Hong Kong people into docile subjects of the Special Administrative Region under Chinese sovereignty, the necessary thing government must do is to use its education system to produce future clones incapable of independent thinking, apolitical and cannot appreciate freedom as much as the present generations.

CY Leung wants by such a showdown of his powers to make Hong Kong people feel powerless, and resigned to the fate of having to succumb. I am here to assure CY Leung that his wish will not be granted. Hong Kong people will not yield. The power of the powerless will overwhelm him, and he will not have the last laugh. I see his recent irrational and schizophrenic behaviours as evidence of his desperation and show that he is already a spent force.

Alan Leong Kah-kit is a Civic Party legislator, representing the Kowloon East geographical constituency. This is an edited version of his speech at RTHK’s Letter to Hong Kong.

Be the first to comment on "Leong urges Xi to correct ‘one country, two systems’ distortions"