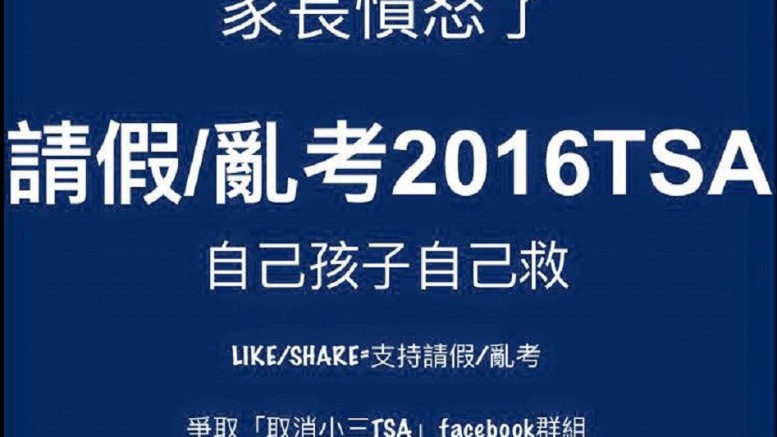 A group of parents of Primary Three pupils call for a boycott of a city-wide test, known as TSA.

Will history repeat itself? This is the question raised in the Hong Kong society as a parents-led campaign against the abolition of the Territory-wide System Assessment, commonly known as TSA, has precipitated a near-crisis for the Leung Chun-ying administration. The dilemma he faced has been likened to the uproar against the national education curriculum for secondary school students in 2012.

On July 29, more than 90,000 parents and ordinary people staged a march to protest against a national education curriculum in secondary schools. It set the scene for a nine-day siege of the Government headquarters in Tamar since the school year began on September 1. The first major crisis of the then young Leung Chun-ying administration was averted after he backed down. The plan was shelved indefinitely.

The landmark uprising spearheaded by a student group, Scholarism, led by Joshua Wong, has shocked Beijing. Various sources close to Beijing said the central authorities have admitted the decision to cave in to protestors’ demand was wrong. They feel adamant there is nothing wrong to require secondary school students to take national education classes. Also importantly, it was wrong for the government to let people have their way by taking to the streets.

With hindsight, mainland officials said the government concession has undermined the authority of the Leung administration, derailed the national education plan, embarrassed the central government and given a big boost to the growth of student activism.

In many aspects, the opposition against the TSA differs sharply from the 2012 protests.

Unlike the highly sensitive national education, the TSA exams have nothing to do with ideology and dogma. Started in 2004, it is designed as a way for the Education Bureau to keep track of pupils’ progress and schools’ results. The exams are held for Primary Three an Six and Form Three pupils.

Officials insisted students do not need to do any special preparation. In reality, repetitive drills in schools and at home have brought enormous pressure on pupils and parents. When a group of parents called for its abolition on Facebook a couple of months ago, tens of thousands have signed up. The Education Bureau might have expected the appointment of a committee to review TSA would help lessen the opposition voices so that they could have more time to try to defuse the time bomb. It was proved to be a failure.

Government hint of TSA concession too little, too late

There are looming signs that a fresh wave of protests led by parents and pupils may soon hit schools and streets, posing a challenge to the embattled Leung administration. It followed a public hearing held by the Legislative Council’s education panel on Sunday. At the session, most participants, including two Primary 3 pupils, were in one voice condemning TSA. Meanwhile, fissures surfaced in the pro-government camp with some lawmakers showing signs of a rethink of their support for the TSA. Acting education minister Kevin Yeung Yun-hung has revealed they might make “major adjustment” of TSA if they could not fix the problem of repetitive drilling. The pro-government flagship Democratic Alliance for the Betterment and Progress of Hong Kong echoed Yeung’s qualified pledge of a TSA revamp.

Yeung’s softening stance, however, looks unlikely to dampen the momentum of opposition. At least 70 parents plan to launch a three-day boycott of class by their children next week.

First started with a small-scale protest, the opposition against national education curriculum had soon snowballed to become a major political crisis.

Beset by the 2012 governance fiasco, the Leung administration seems to have never learned from mistake. Or perhaps they have drawn a wrong conclusion that it was wrong for them to heed the demand of students in 2012. To them, history must not repeat itself and that they ought to uphold TSA, regardless of the complaint that it has become a “monster.”

Photo: Picture taken from an anti-TSA group on Facebook

Be the first to comment on "Parents up in arms again, this time against pupils’ assessment tests"