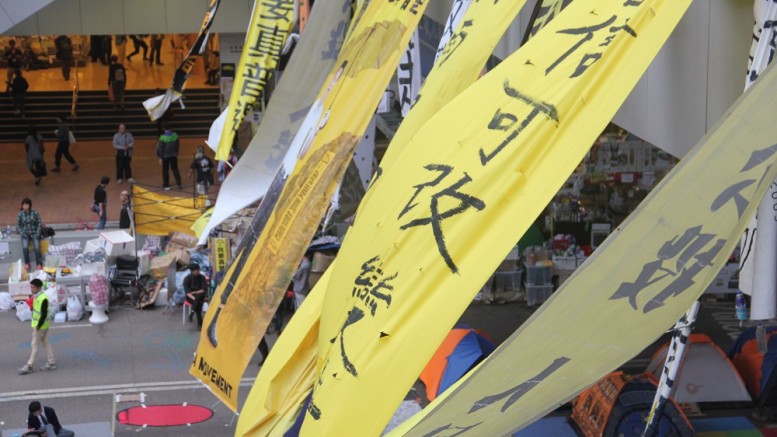 The Occupy Central (pictured) and 'localist' movement has broadened the spectrum of the pan-democratic camp.

The just-ended District Council election has given new impetus to the pan-democratic camp for them to recuperate from their setback in the Occupy Central movement. When a new opportune moment arises, the next democratic movement will certainly reach a new height. Contrarily, the mobilisation power of the pro-establishment force has already reached their peak.

Two years ago, I took the view that the Democratic Party should adjust their political discourse and positioning in the face of the growth of “localism” thinking among young people. This is because the mainstream Democrats were no longer able to absorb or effectively speak for the new masses. But the Sunday election saw the rise of “umbrella soldiers” and the strengthening of the NeoDemocrats (who won 15 of their 16 contested seats). Moderate localist masses have now had their political representatives. The original pan-democratic political parties no longer have to adjust their discourse and positioning. Those parties may further lose some of their supporters. But there will not be a hard landing. The Democrats only lost four seats. Based on the rate of decline, it will still be able to survive for a certain period of time.

The emergence of “localism” and Occupy movement are not something the pro-establishment camp can emulate. They are not capable of inventing new thinking and discourse. Their political campaign is still relied on traditional mass organisations and united front machinery, massive hand-outs of benefits to their supporters and the recruitment of temporary outsiders and long-term migration of mainlanders to the city. The fact that they have to migrate more people from outside Hong Kong to the city has exposed their failure to gain new supporters from among the local residents.

The pro-establishment force had tried to lure more supporters by mobilising the masses through ideological appeal. Their task had gained help previously because of China’s economic success, rise of nationalism and the stimulating effect caused by the country’s show of force in international territorial disputes. Their power to mobilise people, however, has been seriously crippled by the slowing economy and depreciation of the power of nationalism. This district council election also saw the mobilisation of power among state-funded enterprises, who have given full support to their employees contesting for seats.

But like the goalless draw between China and Hong Kong in the World Cup qualifier match, the full backing of the state machinery is no guarantee to victory. The pro-establishment camp has failed to meet their targets despite the nation’s enormous support and Chief Executive Leung Chun-ying’s vow to penalise the pan-democrats for their vetoing of the political reform blueprint.

Therefore, it is unnecessary for Hong Kong people to feel overly gloomy about the future elections. It is vitally important that the pan-democrats’ election teams are able to strike the hearts and minds of people with their passion. If they can do that, they will be able to win people’s support and that David can knock down Goliath.

Joseph Lian Yizheng is former editor-in-chief of the Hong Kong Economic Journal and former full-time member of the Government’s Central Policy Unit. This is a translation of the excerpts of his article published in HKEJ on November 26.

Be the first to comment on "Pan-democratic force gains strength from ‘localist’, Occupy movement"