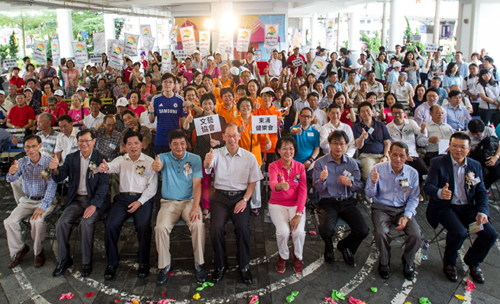 Tsang Tak-sing, the former home affairs minister who was given the boot by Chief Executive Leung Chun-ying, may have become yesterday’s man. The question of why he was removed by Leung has continued to be a subject of speculation by pundits.

Quoting “a person familiar with the situation,” the South China Morning Post said in a front-page story on Monday Tsang was “at odds” with Leung over the setting up of a “mysterious military-style youth group,” referring to the Hong Kong Army Cadets Association.

Tsang, who is seen as a traditional patriot, is said to have reservation about the new body, which he considered as “too formalistic.” The article did not elaborate.

Dropping a hint of his disapproval of the quasi-official body, the article highlighted Tsang’s absence from the inauguration ceremony held in January. It was attended by Leung and his wife, who is the association’s “commander-in-chief”, and senior Hong Kong-based mainland officials and some ministers.

The association has almost disappeared from public limelight since its inauguration. Few people seem to care what it does, if any. When news of the new body broke, critics have voiced out fears that the association could be an attempt to indoctrinate young people. The paper quoted a spokesman for Leung to say they have nothing to add to their statement on Tsang’s department.

Compared with the “army cadet theory,” an observation by Joseph Liang Yizheng, former chief editor of the Hong Kong Economic Journal, linking Tsang’s “forced retirement” with a brewing row over a plan to revamp the Avenue of Stars in the Tsim Sha Tsui waterfront initiated by New World Development, sounds more interesting.

New World, which built and was given right to run the Hong Kong version of Hollywood’s Avenue Stars until 2024, has joined the Leisure and Cultural Services Department, to co-develop a four-hectare piece of land at the adjacent waterfront area into a major attraction. The project will include a good hub, a film gallery and a performance venue.

New World has set up a non-governmental body comprised of two members, Adrian Cheng, son of Henry Cheng, and Leonie Ki, a board member to manage the project. Although the government insisted New World would not benefit from it, critics and doubters are not convinced. They deem it as another case of government-business collusion.

Henry Cheng has raised eyebrows when he stood on the stage when Leung delivered his post-election victory speech in the 2012 chief executive election. Ms Ki was a core member of Leung’s election team.

In his regular newspaper column published on Monday, Lian said it was hard to believe Tsang would see eye to eye with his successor Lau Kong-wah on the project.

Saying New World is now managing the Avenue of Stars, Lau argued collaborating with the developer was “a matter of course.”

Lian said Tsang should tell the public his stance on the decision on the project. “Is it because of the revamp plan that has caused Leung to give Tsang the marching order?” Lian asked.

In his article, he wrote he has already warned of a reconfiguration of the business-interest landscape after Leung took power. Put plainly, Lian believes those who are close to him would stand to gain more from the Leung government.

The guessing game on Tsang’s exit may go on fervently in the political circle. One thing is certain: the re-configuration of political and business interests during Leung’s reign will be inevitable.”