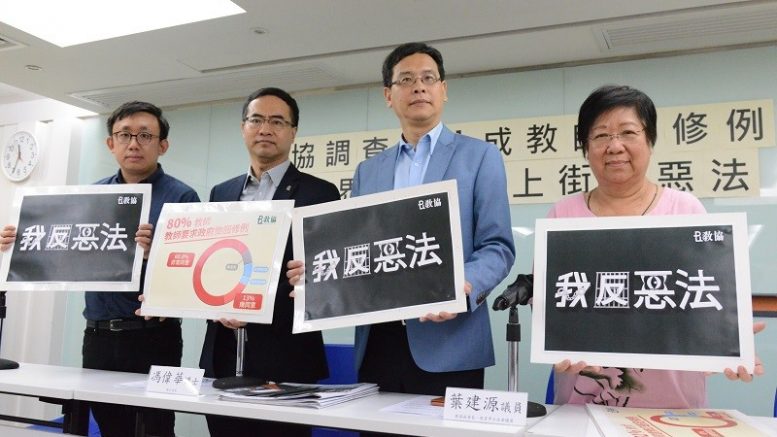 In a shameless act of self-neutering, the Hong Kong Government announced yesterday (July 31) they will cut ties with the Professional Teachers’ Union (PTU), the city’s largest teachers’ body, hours after China’s official media blasted the union.

The Education Bureau said it would no longer work with the PTU, claiming their deeds and words in recent years have not been in line with the education profession. A spokesman claimed the union was “no different from a political group.”

In the statement, the bureau mimicked allegations against PTU in articles published by China’s Xinhua news agency and the People’s Daily on Saturday. They include the union’s participation with the Civil Human Rights Front and the Alliance in Support of Patriotic Democratic Movements of China.

The two bodies have been accused by pro-Beijing forces of breaching the national security law. But they have not been declared as unlawful bodies, at least for now.

Echoing the national propaganda machine, the bureau fingered at the PTU for the anti-extradition bill protest in 2019, which morphed into a protracted social movement. The union was blamed for the involvement of teachers and students in the “violent and illegal activities.”

The bureau said it will no longer hold meetings with the union and its representatives, nor will they consult the group regarding education issues. Concerns and cases forwarded by the group will not be dealt with, teacher training courses held by the union will not be recognised, and PTU representatives may lose their seats in different government consultation groups, officials said.

The bureau took the swift, also highly unusual, act within hours after the state media stepped up attack against the union, which was described as a “tumour that must be rooted out.”

It is the strongest signal from China’s official bodies for action against the union, following months of smearing and accusations launched by the two pro-Beijing newspapers, Wen Wei Po, Ta Kung Pao, against the union.

The pro-Beijing forces have repeatedly called on the Government to outlaw the union.

Chief Secretary John Lee yesterday declined to comment on whether they would investigate the union, only saying they would act according to the law if a group goes beyond its scope.

The latest attack by the state media appears to be aimed to put more pressure on the Government for it to remove the “tumor” as soon as possible.

Secretary for Education Kevin Yeung Yun-hung, who had been criticised as being too soft dealing with teachers who were alleged of misconduct, took the cue – and acted.

This is despite the fact that the PTU is still a lawful body with more than 95,000 members.

In a brief honeymoon period with the PTU after she took office, Chief Executive Carrie Lam attends an anniversary event of the Professional Teachers’ Union.

Acting after the state media made a series of allegations, Yeung, with no doubt the backing of Chief Executive Carrie Lam, gave up the autonomy supposedly given to Hong Kong in dealing with a teachers’ union by declaring a cut of ties.

Beijing’s promise of “Hong Kong people ruling Hong Kong” has already become the subject of ridicule, if not an item of collective memory, in recent years. The era of “Western ruling Hong Kong,” referring to the central government’s Liaison Office based in Western district, has already begun in earnest.

It is the latest case adding more credence to prove one of the major concerns of last Hong Kong governor Lord Patten about the city’s autonomy after 1997 written into his last policy address in 1996 is not groundless.

Lord Patten wrote in his swansong speech:  “My anxiety is this: not that this community’s autonomy would be usurped by Peking, but that it could be given away bit by bit by some people in Hong Kong.”

He was diplomatic in his prediction, or indeed kind to the Chinese Communist Party giving them the benefit of doubt, only to be trashed by the party leadership since the handover.

In that sense, he was proved wrong: Beijing did usurp the autonomy they promised to Hong Kong in managing the city’s internal affairs. 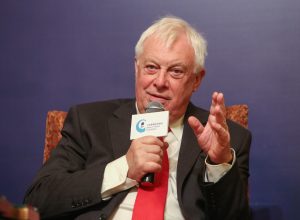 Last governor Lord Patten speaks at a seminar hosted by Project Citizens in Hong Kong in 2016.

Lord Patten was proved right, however, in his prediction that autonomy was being given away by some people in Hong Kong.

He might have thought the suspects were the pro-Beijing circle and loyalists.

The last governor might feel surprised and disappointed that people like Carrie Lam and Kevin Yeung, who were among the elites groomed under the British Hong Kong government, have joined hands with Beijing to take away the vital part of the city’s autonomy in running the city’s internal affairs.