A cartoon of front-page story on Ta Kung Pao with a caption that quoted a protester as saying judge/s back him/her.

A looming battle over judicial independence in Hong Kong saw an interesting side-battle on Monday as the Bar Association demanded the justice chief take action against the pro-Beijing Ta Kung Pao for its attack against a High Court judge.

The association on Monday published a letter it had sent to Secretary for Justice Teresa Cheng expressing its “utter dismay and astonishment” at the way the newspaper reported a ruling by Justice Anderson Chow last week.

Justice Chow ruled the failure of police riot officers to display their ID number at protests a violation of the Bill of Rights. Police said they will lodge an appeal.

The HKBA noted that a front page headline on Ta Kung Pao on Friday read “Thugs rule, no human rights for policemen” and was accompanied by a cartoon depicting a protester saying to an officer “Show me your number, the judge backs me”.

The article, the association said, conveyed a message that judge Anderson Chow was partisan and biased in favour of protesters, or that he supported criminal activities.

“The [Bar] Council considers that Ta Kung Pao has gone beyond the boundary of acceptable criticism of judicial decisions,” the letter said, adding that the article “hovers on the margins of a contempt of court”.

The HKBA reminded Cheng that as justice secretary, it falls to her to defend judges and the judiciary against “the pernicious accusations made in the newspaper article,” and urged her to “take appropriate action”.

Regardless of its number of circulation, Ta Kung Pao is no ordinary newspaper. It is an open secret that it has close ties with the Central Government’s Liaison Office and that its stance often reflects the views of Beijing.

In the past few months, the newspaper has acted as a crusader of reform of the Hong Kong judiciary, teaming up with the pro-Beijing flagship, Democratic Alliance for the Betterment of Hong Kong.

Citing cases of allegedly court rulings biased in favour of the protesters, the advocates for a revamp of courts have called for the setting up of a sentencing review committee on court ruling and another body on the monitoring of the judiciary.

Under the heading of “Judicial reform series”, Ta Kung Pao has in recent months given massive coverage of harsh words of judges’ ruling of cases related to the anti-extradition bill protests and called for judicial reform.

The intensified attack against judges has prompted a long response from Chief Justice Geoffrey Ma in September. In an 18-page long statement, he made an impassioned plea against attacks on the judiciary, saying levelling such charges is wrong and will lead to the public losing faith in the judiciary.

The Chief Justice said though courts are not beyond criticism, raising unjust charges against judges or without proper grounds would damage the public’s faith in the judiciary.

That has not impressed the judge-bashers for them to exercise self-restraint. Instead, an article written by former CFA judge Henry Litton, in September calling for judicial reform has given fresh ammunition to them for more attacks.

Last week, Zhang Xiaoming, a deputy director of the State Council’s Hong Kong and Macau Affairs Office, has added his voice to calls for judicial reform. In an online speech given at a forum organised by the Justice Department, he claimed Mr Litton’s call has received support in the society.

The writing is on the wall. The central government has sent an no-unambiguous message to their loyalists for them to keep up the fight for a revamp regardless of whether doing so would deal a body blow to judicial independence. 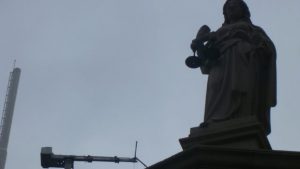 Justice Chow’s ruling last week on the Police’s identification card has given a new case for the judiciary-bashers to accuse him of backing protesters and, more importantly, to argue the case of judicial reform.

And it is precisely the reason why the Bar is keen to drag Cheng into the political battle by putting pressure on her to fulfil her duty of defending the integrity of the judiciary following the attacks against judges.

Both she and Carrie Lam can no longer pay lip service of upholding judicial independence and opposing unjustified attacks against judges. They have to make a decision on whether Ta Kung Pao has a case to answer in its alleged onslaught of Justice Chow. It will be a no-win case for Lam and Cheng, who dare not make enemies with Ta Kung Pao and the force behind it.

This article was first published on Apple Daily on November 25, 2020.