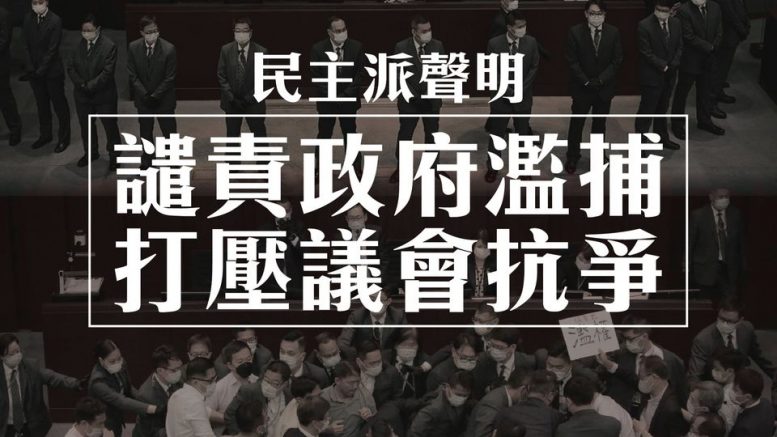 Democrats' statement condemning the mass arrest of another batch of pro-democracy politicians at the late October weekend.

Flash-back to pre-1997 Hong Kong, pessimists had warned of mass arrests of pro-democracy leaders such as Martin Lee Chu-ming and late Szeto Wah as soon as the Chinese Communist Party resumed sovereignty of the colony after July 1, 1997.

That remained a worst-case scenario in the political scene of the Hong Kong SAR until April when Lee, dubbed the city’s “Father of democracy” was for the first time arrested, together with another 14 pro-democracy activists. They were arrested for organising an unlawful assembly in August last year.

The tally of democrat arrestees increased by eight on Sunday and Monday when Police arrested two former legislators, five current lawmakers and one Legco member assistant for breaching the Powers and Privileges Ordinance at a Legco meeting in May. They face charges of contempt, and interference with members, officers or witnesses.

The Legco House Committee meeting in May saw chaos erupted when lawmakers from the pro-democracy and the pro-establishment camp were locked in a tussle over the election of chairman.

The pro-establishment force succeeded in ending a months-long filibuster by Civic Party legislator Dennis Kwok, who was acting chairman of the House Committee before election was held.

It also marked the beginning of another round of political persecution against democrat legislators with seven to be taken to court for offences under the Powers and Privileges Ordinance on Thursday.

They include four Democratic Party legislators, including its chairman Wu Chi-wai, who are being dubbed as the “doves” in the pro-democracy camp because of their moderate stance.

The fact the Government, and no doubt Beijing, has made no attempt to give differential treatment to pro-democracy politicians shows their determination to give no mercy to what they branded as the “opposition”, or “mutual destruction camp”.

Even though there may not be a good, or even real, chance of sending them to jail through prosecution, the Government is anxiously keen to make full use of their power of making arrest and prosecution to give the democrats a hard time.

Some democrats such as Ted Hui are facing multiple cases at different stages of the judicial process. They will have to fight protracted legal battles, which are costly financially and taxing mentally.

Already in the minority in Legco, the strengths of the democrats have been further depleted after the pro-establishment camp succeeded in making amendments to Legco’s Rules of Procedures. The power of filibuster has been significantly curtailed with more power given to the chairman of meetings.

All policy panels in Legco are now chaired by pro-establishment lawmakers to allow no chance for the democrats to play filibuster at meetings.

In many aspects, the democrats in Legco in the next nine months or so before the 2021 Legco election will be a crippled force. The chance of them being able to block bills and motions being taken to the legislature for a vote will be slim.

By invoking the Powers and Privileges Ordinance to prosecute the eight politicians, the Government is attempting to scare the current legislators for them to behave well or risk being arrested in the ongoing legislative session.

Following the implementation of the national security law in July, Chief Executive Carrie Lam and Police chief Chris Tang have claimed early success in restoring a degree of calm in the society.

But that is not enough for them to be kinder to the democrats in and outside Legco. The opposite is true.

The Police and Justice Department are not in the mood of playing soft towards the democrats. Instead, they are hardening their game in order to deal a crippling blow to the pro-democracy force ahead of the Legco elections in September.

Whether it works as a short-term tactic is anybody’s guess. It is a case of political naivety if the Government hopes the democrats will sit quietly at Legco as the opposition. They may change their game to play smartly to obstruct the work of Legco without breaching the rules.

Moreover, it will add more tension to government-democrats relations and more political chaos inside and outside Legco.

In the medium- and long-term, going to war with the democrats, who consistently get the majority of votes in geographical constituency elections, at Legco is unwise.

It will scuttle parliamentary politics. The alternative is street politics, aka street violence. The choice cannot be more clear.

This article was first published on Apple Daily on November 4.