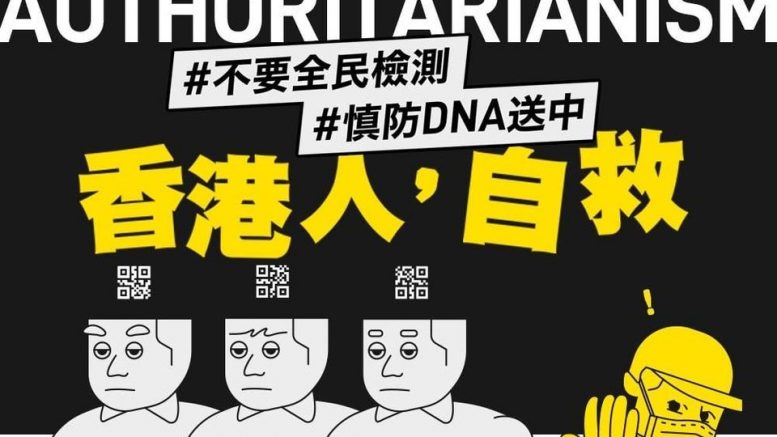 Localist legislator Chu Hoi-tik calls on the public to say no to the Covid-19 tests scheduled to begin on Sept 1.

Hong Kong is facing a record huge deficit of HK$300 billion in the current fiscal year – no thanks to the Covid-19 pandemic and the anti-extradition bill protest-turned-social movement erupted last year. Led by Chief Executive Carrie Lam, the SAR Government has been paralysed by another deficit, namely trust. It is, in a sense, even more difficult to win back.

A case in point is a city-wide universal coronavirus test scheme for all 7.5 million people run by the Government with backing of the central government, which is scheduled to be kicked off on September 1. It will last for two weeks and will be held on a voluntary basis.

Signs are aplenty a sizable number of residents will shun the free test being conducted by doctors and healthcare staff with a fleet of volunteers in at least 100 collection points across the city.

As if she has already smelled the rat, Mrs Lam has shied from setting a high target of the number of participants at a press conference on Friday last week. She has indeed insisted she has set no “hard target” so that officials and staff would not feel under pressure  to boost the figure.

She told reporters claims that health minister Sophia Chan has set a target of five million were wrong, adding that was just the number of the maximum capacity of testing.

Whether five million is the target of the virus test is now irrelevant. Suffering from trust deficit and policy-making chaos, the Lam administration is heading towards a potentially embarrassing fiasco in its bid to identify those patients with no symptoms.

To be fair, the idea of universal tests is not inherently bad or unsound. Nor it is fundamentally political by nature, or a yellow-versus-blue issue featuring the pan-democrat versus pro-establishment divide. With well-researched evidence and data plus fact-based analysis of the various policy options, the Government could put it on the table for the people to discuss and make a decision.

But the fact that the idea appeared to have been first raised by the pro-establishment camp with the Central Government behind being tied with a health code system now widely used in the mainland has, not surprisingly, raised some eyebrows in the political circle.

More interestingly, advocates of the universal virus test targeted at Mrs Lam for her to act swiftly to block the hidden virus transmission paths in the community so that the present social distancing restrictions, in particular, in restaurants could be eased, if not lifted.

About the same time, the testing work has been given to three Hong Kong companies with mainland partners. The construction of a new hospital on the site of the Asia-World Expo has also been tasked with a mainland company, who agreed to do it for free.

Beijing and pro-Beijing Democratic Alliance for the Betterment of Hong Kong and Federation of Trade Unions may genuinely believe the Central Government’s helping hands would be greeted warmly in the society. Yes, but only to supporters of the pro-establishment circle. For the others, Beijing’s offer to help has been met by scepticism and cynicism.

Coming in the midst of fears about the national security law, the communist authorities’ involvement in the anti-virus battle has bred more anxieties and fears. No wonder concerns about the protection of DNA of residents who join the tests have refused to go away despite repeated denials by Mrs Lam and her team.

Already confronted with a sea of doubts about Beijing’s high-profile participation, the failure of the Lam administration to present a convincing case of the merits of universal tests to silence critics and doubters has made the scheme more vulnerable.

To make things worse, the Government has sought not to tackle the substance of criticism head-on, but to play the game of denial and fight-back through rhetoric.

The irony is that the more fierce Mrs Lam denies and attacks, the more credence she gives to the conspiracy theory behind the Covid-19 tests.

This article was first published on Apple Daily website on August 26, 2020.