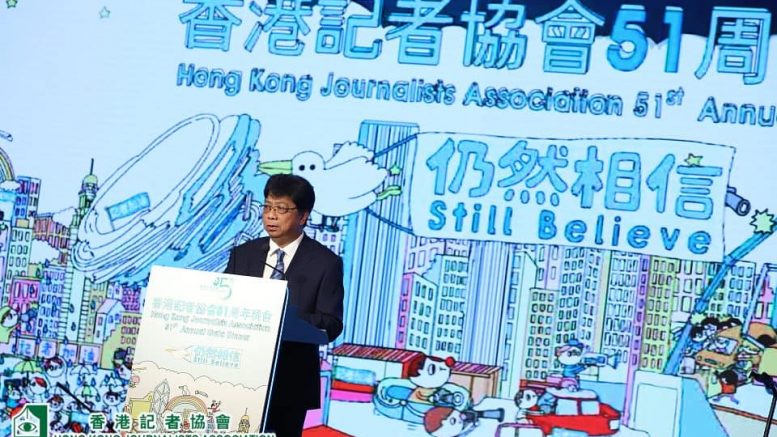 Still believe - Speech given by Chris Yeung, Chairperson of Hong Kong Journalists Association at its 51st Annual Dinner on May 18.

When I concluded my speech at our 50th Anniversary Gala Dinner last year, I said, “Brace against the wind, we move on with a warm heart.” One year on, media are not just bracing against the wind; we are facing a long, chilly winter. Some people say Hong Kong no longer has winter season at times of global warming. For the media industry, winter is the only season we have. Business environment is difficult. The room for freedom of speech is getting smaller. Journalists and Hong Kong people have been threatened that the current administration will enact a law on Basic Law Article 23 within its current term. The content of which will be harsher than what was proposed in 2003. Article 23 has not yet come. We have a sword now hanging over our head – the extradition law amendment. More chills are in the air.

Still, we believe winter will come to an end if we do not abandon our belief, ideal and passion. 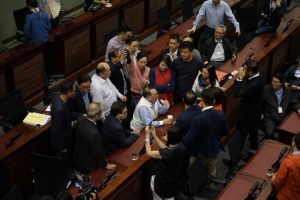 Journalists must adhere to our belief, but we cannot stay aloof from reality. The reality is the ecology of media is deteriorating. The business and political environments are getting worse. The room for freedom of expression and freedom of the press is being shrunk. There is a feeling of déjà vu reading the story of Hong Kong media 2019. It makes little difference from the Hong Kong media story 2018. Many journalists may have already resigned to the reality, though unwillingly, the fate of the media under the policy of “one country, two systems” is doomed. It is a story of “one destiny, two choices.” One destiny: no futures. Two choices: stay or leave. Someone at high place once said, “To leave is easy. To stay needs a lot of courage.” For those journalists who are full of passion and hope for journalism, the decision to stay or to quit has never been easy.

But we still believe in the saying, “The scents of plum blossom emanate from chilly winter.” The tougher the environment, the more challenging the work will be for journalists. Bracing against the wind, we should still uphold our belief. This because we believe, and we believe a lot of people in our society still believe, the work of journalists is very important to the society.

As Chairperson of HKJA for the past two years, I have the opportunity of meeting people from different walks of life in Hong Kong and the international community. I feel clearly they are increasingly worried about the situation of press freedom and freedom of expression in the city. The ranking of Hong Kong in global press freedom index conducted by international media monitoring bodies dropped continuously in the recent years. HKJA conducts regular press freedom index surveys in Hong Kong. We have had a fall for many years. There are growing jitters about self-censorship.

In July 2018, the Hong Kong Foreign Correspondents Club invited Andy Chan, convenor of the Hong Kong National Party, to speak at a luncheon. The Chinese Central Government and Hong Kong Government strongly condemned FCC, saying it should not provide a platform for Andy Chan to promote his pro-independence stance. Critics said the Government should take back the premises. While it remains unclear whether FCC can renew its lease, the fate of Victor Mallet, the then FCC Acting President who was involved with the saga, has been decided. His application for a work visa renewal was rejected. He was later denied entry to the city.

The Hong Kong and international community are gravely concerned about the incident. They are worried that the pressure imposed by the central and Hong Kong governments on FCC and the punitive moves against Mallet will undermine freedom of expression and freedom of the press. By “killing the chicken to send a warning to the monkey,” the Government will make self-censorship among the media more serious.

We hold the view that it is normal for FCC and other community groups to invite different people to attend their activities. They should not be subjected to disruption, threats and interference. The Government has not only failed to uphold press freedom; they also took the lead to scuttle the room for freedom of expression and freedom of the press, setting a bad example in society. The “political red line” becomes redder, and more visible in the society. Over the past year, the “red line” has brought about changes to the behaviours, criteria and values of people in the society.

Practitioners in sectors ranging from news and publication, arts and culture, tertiary education and academic research firmly believe in plurality, accommodation and rationality. “I Disapprove of What You Say, But I Will Defend to the Death Your Right to Say It.”

The “political red line” can be arbitrary. The fact the Government has kept emphasising its importance risks putting politics above the law. The prevalence of “red line” have immense impact on the basic criteria of people’s behaviours. It suffocates plurality, accommodation and rationality. All that is left is compromise.

The Central Government and Hong Kong Government have kept reminding journalists to “stand behind the red line.” A guessing game is on where the “red line” is. To avoid falling onto or being pushed on the back onto the tracks, it would be better to play safe by staying the farther from the line the better. The room for press freedom will shrink further.

We still believe in plurality, rationality, freedom, accommodation, openness and accountability, the virtues of a world class city. 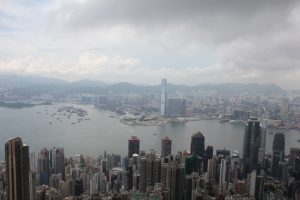 Hong Kong is a small city with about 7.4 million people, but with a plethora of media outlets of various kinds. On the surface, it is a thriving scene. But behind the scene is doom and gloom. Pay is low. True, some journalists got promoted and enjoy a surface pay rise. Nevertheless, the increase in pay is incompatible with the increase of workload. The departure rate of junior reporters is high; the drain of experienced reporters is serious, resulting in succession problem in newsrooms. Those at the senior level found it difficult to navigate in the midst of uncertainty. Some people say each generation in the news media lasts about three years, and the deadline is five years. When the deadline nears, they must decide. Stay on or quit.

We still believe the mission of journalist is to tell the truth and promote social justice, expose the dark side of the society and manifest the genuine, the good and the beautiful.

We believe there is no “deadline” to the mission of journalist. We believe journalists who leave the industry have and will never forget the mission of journalists. Although they are in a different post, they still behind us, like many other citizens. They cheer us on, asking us to “keep it up, go for it.” We will not forget our mission to seek the truth and dare to expose lies and prejudices. Know what we can do, what we cannot do.

HKJA is a trade union. Fellow journalists hold out expectations on us. The public also hold out expectations on us. One of our missions is to fight for the rights and benefits of journalists, improve their work environment and enhance professional standards. We also fight for press freedom and freedom of expression. We have to admit there are shortcomings in our work. Our ability to change the predicaments the media industry is facing is limited. With the promises of “one country, two systems” being eroded, only the “red line” stays. Faced with shrinking room for press freedom and freedom of expression, we do not over-estimate our ability to change the environment. If we persevere, we have hopes to bring about changes – change for the better. For we believe, if we give up, we have to accept changes. And it would be change for the worse.

Brace against the wind, we move on with a warm heart!

Still believe, go for it!

(Editor’s note: This is the full speech of Chris Yeung, Chairperson of Hong Kong Journalists Association, at its 51st anniversary Gala Dinner. An abridged version was delivered at the dinner.)