Young people come out e n masse to vent out their anger against a court ruling on the Occupy Central Student Trio.

Alex Chow Yong-kang and Tong Kam-ting probably do not know each other. Young both are, they have one major dissimilarity. In a sense, they are living in separate worlds.

Chow is now serving a seven-month-long jail term after being convicted of storming into the Government Headquarters in a prelude to the Occupy Central in 2014. Tong Kam-ting, a Form Six student, is chairperson of the student union of Queen Elizabeth School Old Students’ Association Tong Kwok Wah Secondary School in Yuen Long.

They have one thing in common, nevertheless Like many in the 15-25 age group, they are persistent and dare to speak out in what they believe to be the appropriate way on things that matter to their future.

The pair were a sensation in social media at the weekend with their remarks given on separate occasions going viral. In his first “Letter from Prison”, Chow reaffirmed his belief in democracy. “Without democracy, any talk about rule of law is a luxury.” He warned the city’s core values would be endangered if the rule of law and judiciary became a tool to suppress dissent and prolong special privileges and totalitarian rule.

Citing novelist George Orwell, Chow wrote, “In a world of universal deceit, telling the truth is a revolutionary act.”

“At a time of proliferation of lies,” he said, “we must be courageous to tell the truth to the society. Do not be afraid of the power and the rich and keep silent. We ought to know silence, cynicism, apathy and resignation to fate are the biggest accomplice to all sins and injustice.

“At a time of rebellion against fate, we must keep a gentle and soft heart and sharp and clear mind. Only with that we will be able to shoulder the mission of our times. Against the wind we move forward. Remove the dark clouds. Let justice see the light again.”

Also having scooped tens of thousands of likes from Facebook was the footage of a speech given by Tong, the Form Six student, at the school’s commencement ceremony last week.

Entitled “Learn to become an inappropriate person,” Tong recalled the scene of her parents being told by her teacher that she was not “sophisticated and tactful” enough. Her parents were given a kind reminder by her teacher that Kam-ting would be in an disadvantaged position when she faced the real-life test in society in view of her character.

In a show of defiance, Kam-ting said she would indeed argue everyone should learn to act an inappropriate manner by persisting to do what is right.”

She cited another episode in school when a student was being criticised as disrespectful and inappropriate when she turned her back to the national flag at a flag-raising ceremony.

“But when you face that communist regime and the continuing erosion of our freedoms, we will persist on expressing our discontent clearly even in an inappropriate manner.” 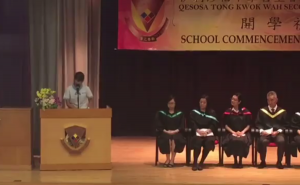 Student union leader of a Yuen Long secondary school speaks at school commencement date of her persistence of speaking up.

There is no doubt both Chow and Tong would perhaps be deemed as rebels, if not radicals, in some quarters of the society. Chow was thrown into prison by a panel of Appeal Court judges for violating a law on public order. Tong’s act of defiance is not likely to be given harsh punishment. Without naming her, the school issued a statement after the episode to remind students they must express their views through lawful means and in a peaceful and rational manner.

Both Chow and Tong are the targets of a warning by the Appeal Court judges trio against the growth of “unhealthy wind” in the society, referring to challenges against the law on grounds of seeking justice.

That the young pair have presented their case and aspirations in a calm and thoughtful manner with a soft heart and a strong will is both a positive and negative sign.

The worry is that the generational divide fears widening if no efforts are made to bridge the different generations.

The positive sign is that the young generation still believe they should come out and speak up, albeit in ways not deemed by others as inappropriate and impolite, to defend their values and values. And they have acted what they preached.