Storms have taken over Hong Kong in recent weeks: the disqualification of four more legislators on July 14, the jailing of 13 land rights activists on August 15, the additional sentencing of 3 student leaders of the Umbrella Movement on August 17, and the cessation to mainland authorities of jurisdiction in the West Kowloon train station by next year.

We knew that the storms were coming. Still, we are shaken by the severity. Beijing is increasingly brazen about violating the “one country, two systems” model and replacing it with de facto direct rule.

In the aftermath of the Umbrella Movement in December 2014, Chen Zuoer, the president of Chinese Association of Hong Kong and Macao Studies and the former deputy director of the Hong Kong and Macau Affairs Office, vowed to rein in “Hong Kong’s governance”. He declared a struggle against all the societal forces behind the protest, “from the street to the law courts, to the Legislative Council, to inside the government, and to universities and secondary schools, etc.” (“街頭轉到了法庭，轉到了立法會，轉到了政府內部，轉到了中學大學等”).

The Umbrella Movement was fueled by anger over the erosion of Hong Kong’s much cherished freedoms – the rule of law, the independent judiciary, the impartial police, the free press, and the neutral civil service.

The rallying cry of the movement, “we want genuine universal suffrage,” did not come into fruition.

If Hong Kong’s protestors saw that they could not hold on to freedoms without democracy, Beijing’s officials seemed to learn that they should stifle freedoms if they want to deny democracy. Chen thus called for an all-out struggle against all pillars of Hong Kong’s freedoms.

It was the easiest to control the government. All it took was to anoint the ‘trusted’ Carrie Lam as the new Chief Executive. According to Zhang Xiaoming, chief of Beijing’s Liaison Office in Hong Kong, the Chief Executive has “overriding power” over not just the executive, but also the legislative and judicial branches, seemingly putting the chief executive above the law. The Chief Executive’s overwhelming authority on appointments and promotions has then made it easy to manage not just the civil service and the police, but also the department of justice and the courts. 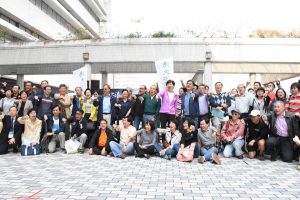 To control universities, the former Chief Executive C. Y. Leung stacked university councils with pro-regime figures. The loyal councilors would then duly appoint the right candidates to top positions. Thus, Johannes Chan was denied promotion as a pro-Vice Chancellor at the University of Hong Kong, and Rocky Tuan was appointed as the new Vice Chancellor at the Chinese University of Hong Kong.

To control the legislature, the government first barred the independence advocate Edward Leung from running in the election at all. To get rid of two other localists, Yau Wai-ching and Leung Chung-hang of Youngspiration, who managed to slip through, C. Y. Leung asked the court to bar them from re-taking their oath. The duo had displayed a “Hong Kong is not China” flag during their swearing-in ceremony in October.

Before the court issued a verdict, Beijing issued an interpretation of the Basic Law which was used to retroactively disqualify any legislator-elect who made revisions or additions to the formal oath. The intervention was a sign of how much Beijing distrusted Hong Kong courts at the time. Faced with a strident and binding Beijing interpretation, the court fully complied with Beijing’s intention to expel the first two opposition legislators from the Legislative Council.

Has Beijing now reined in the last independent branch of government – the traditionally staunchly independent Hong Kong courts? It would be a good research topic to examine the impact of the Chief Executive’s “overriding power” over judges. It is worth noting that, in November 2016, Chen Zuoer sounded an unmistakable complaint about judges in a closed-door meeting. He was quoted to have said: “The price of committing an offence was too low in some situations in Hong Kong… Taking the Occupy Movement as an example, how many movement leaders were brought to the court up until now? Why were they not in the court?” http://www.scmp.com/news/hong-kong/politics/article/2050425/no-mercy-hong-kongs-pro-independence-rats-says-head-top)

The 2014 White Paper had already admonished courts to guard national security. Throughout 2015 and 2016, pro-regime voices repeatedly complained that judges released the majority of protest-related defendants or gave very lenient sentences to the convicted few. It is true that the common law has historically been sensitive to the free speech rights of public order defendants.

It was in this context that the Department of Justice appealed against the light sentences of community service to 13 land rights protestors who had stormed into the legislative council building in June 2014, and 3 student leaders who had clambered over the fence set up to close off the “Civic Square” in August 2014. By August 2017, the Court of Appeal could be trusted to comply with the government’s wishes. It handed down jail terms of 8 to 13 months in the former case and 6 to 8 months in the latter case. While the land rights case involves less known activists, the “civic square” case includes the well-known former student leaders Joshua Wong, Nathan Law (also one of the disqualified legislators), and Alex Chow, who were instrumental in sparking the Umbrella Movement.

There will surely be more prison sentences for other political cases in pending.

Chen Zuoer has thus splendidly accomplished the goal of striking down pro-democracy forces in a short span of only two and a half years.

Somehow, for Beijing, it is not enough to avert democracy and stifle freedoms in order to fully rein in Hong Kong. The planned West Kowloon railway station will give final jurisdiction to mainland authorities. Hong Kong people are told that this is a done deal with no room for negotiation over better arrangements that would not violate Hong Kong’s autonomy.

With the “one country, two systems” model gone 30 years ahead of schedule, Hong Kong is fast becoming just another ‘mainland’ Chinese city. When the Chinese trains roll into West Kowloon under mainland jurisdiction in Fall 2018, Hong Kong will become a part of the greater Shenzhen.

Beijing has broken the promises of “Hong Kong people ruling Hong Kong” under “a high degree of autonomy” for 50 years.

The one promise that Beijing has kept is that the PLA would not fire a shot in Hong Kong. It is a genius stroke to send in the train instead of the bullet.

What keeps Hong Kong distinct is what cannot be locked up: the yearning for democracy and freedoms and the commitment to fight for them among the city’s youngest.