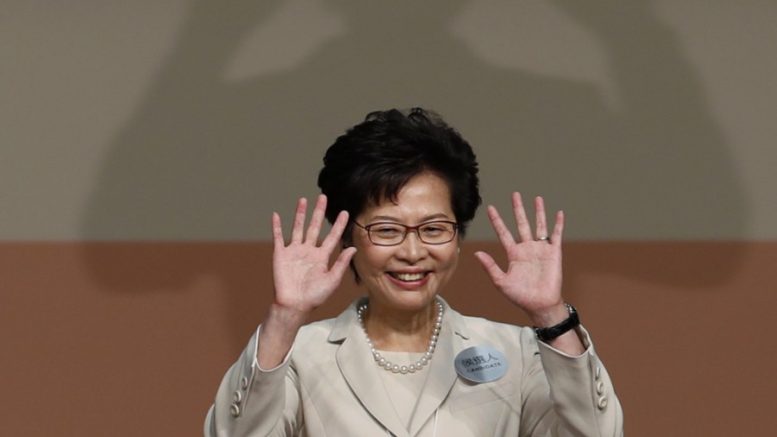 Carrie Lam plays down pro-independence activism in a political gamble aims to get more leeway in her five-year term.

Chief Executive-elect Carrie Lam Cheng Yuet-ngor has taken one more step to distance herself from Leung Chun-ying, casting doubts about the support of the so-called pro-independence thinking in the society.

In an intriguing revelation at a Cable TV programme on Saturday, she revealed she has told central government officials and friends from mainland China she has reservation about the idea that pro-independence thinking has become a “wave.”

“It is (an idea) pushing by just a very small group of people. It is unrealistic and should not be raised,” she said.

Her remarks are in stark contrast with the tone and substance of comments not just made by Leung, her former boss, but also the Liaison Office director Zhang Xiaoming and NPC chief Zhang Dejiang on separatist thinking in the society.

Leung gave a high-profile warning against the advocacy of “self-determination” in his 2015 Policy Address, singling out the 2014 February issue of Undergrad, the official magazine of the Hong Kong University Students’ Union, for attack.

The student publication featured a cover story entitled “Hong Kong people deciding their own fate”. Leung also cited a book named “Hong Kong Nationalism” published by Undergrad, which advocates that Hong Kong should find a way to self-reliance and self-determination.

Leung’s salvo against the HKU student publication has, deliberately or inadvertently, given a fillip to the pro-independence activism. Monthly after he called on citizens to stay alert of the rise of pro-independence idea, the first political party that formerly advocated Hong Kong independence was launched.

Since then, mainland officials and the pro-Beijing camp and media in the city have intensified their attack and warning against the idea of pro-independence, self-determination and the like.

Speaking at a Basic Law symposium in Beijing last month, Zhang Dejiang, chairman of the National People’s Congress, has warned advocates for “self-determination, Hong Kong independence” were attempting to deny the central government’s jurisdictions over the city. He said those people were attempting to turn Hong Kong into an “independent, semi-independent political entity,” warning the Beijing could not ignore it.

Mrs Lam ventured to take a softer line on the highly-sensitive Hong Kong independence issue days after a poll showed a marked drop of support for independence, especially among the young people.

A poll conducted by a Chinese University of Hong Kong research centre published early this month shows support for Hong Kong independence dropped from last year’s 17.4 per cent to 11.4 per cent. The drop in the 15-24 age group was the sharpest, down from about 40 per cent last year to 15 per cent this year. Meanwhile, about 71 per cent back the preservation of “one country, two systems.”

A CUHK poll shows support from the 15-24 group for independence drops sharply.

The findings are in line with signs of a waning of the advocacy of pro-independence ideas, including self-determination in the past year or so. The past year saw the conviction of several participants in the Mong Kok unrest in 2016 for riot charges. A spate of trials relating to the Mong Kok clash and the Occupy Central movement has also begun.

It is difficult, and also too early, to say the pro-independence activism has lost its momentum. If anything, the row over Hong Kong independence in the past few years shows the way the Chief Executive and Beijing leaders handled the issue could make a lot of difference.

The simple truth is: the harder they hit the so-called independence activism the stronger the resistance and opposition against the pressure from the Hong Kong and mainland authorities.

In view of the hard-hit approach of Leung and the Beijing leadership against pro-independence thinking, the room for Mrs Lam to handle the issue with flexibility and in a softer approach is limited.

The poll findings have provided timely evidence for her to play down the threat of pro-independence thinking.

Doing so will help moderate the political atmosphere, thus easing the pressure for her to enact a national security law in according with Basic Law Article 23. Though stopped short of giving a deadline, top Beijing officials have given clear indication there should be no more delay in the Article 23 legislation.

The irony is that any move by her to resume the legislative work, which was shelved in the wake of the July 1 march in 20013, in the next few years is set to heighten tension in mainland-Hong Kong relations.

Support for independence is poised to raise again and the backing for the “one country, two systems” will drop. Calls for Mrs Lam to act and talk tough on independence, as Leung did, will emerge from both Beijing and the local pro-China circle.

Mrs Lam took the risk of being criticised by hard-liners in the pro-Beijing camp for talking down the severity of pro-independence thinking. Hard-liners, including Leung, have attributed the rise of separatist thinking to the lack of vigilance and the abundance of wishful thinking in the officialdom and society at large in recent years.

She has no choice but to take a political bet on her judgment, hoping that a more objective and softer assessment on the so-called independence threat among the populace will help lower the political temperature and create more leeway for her to focus on economic and livelihood issues after July 1.

This article also appears on CitizenNews.