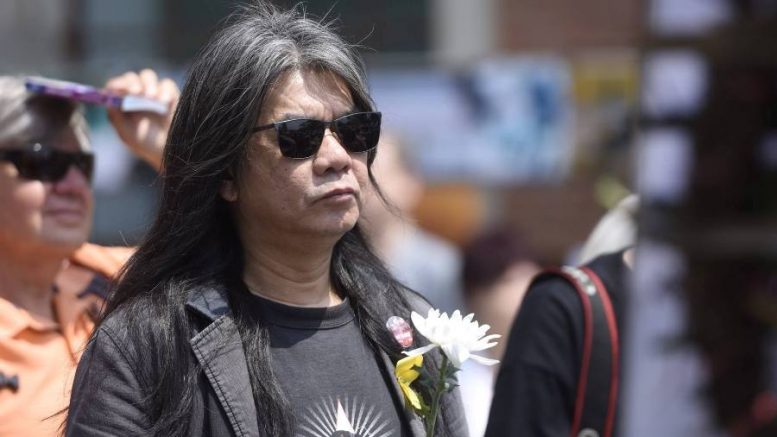 Leung Kwok-hung apologise for his failure to fight for an universal pension system in the past five years.

May is an eventful month full of important historical meanings. Just last week during a May Day memorial I shouted slogans in the face of CY Leung, the host. They were: “Workers need standard working hours”, “Senior citizens need provident fund” and “Hong Kong needs genuine universal suffrage”.

The guests celebrated. But I am sure they didn’t have a clue what they were toasting for. The host Chief Executive gave a speech. But I wonder why he didn’t say a word about the origin of May Day. It is just like a funeral speech without telling the life of the deceased. Wouldn’t you feel strange? But every CE every year did the same.

I am sure it is not because they don’t know. They just choose to forget. How else would they feel at ease facing the true historical meaning? The May 1st International Labour Day grew out of a labour movement in the middle of the 20th century in the West. People were fighting for an eight-hour working day. To show an international solidarity, workers from Austria to Australia with those in the UK and the US held a general strike on the same day demanding “to work eight hours, rest for eight hours and have leisure for eight hours.

On the 4th of May 1886, workers in Chicago held a peaceful demonstration in the Hay Market to remember their fellow men killed a day before. Again they were brutally attacked by the police. There were casualties on both sides. But seven labour leaders were sentenced to death. This sparked a world wide protest. And in 1889 the Second International pronounced the 1st of May to be the International Labour Day. It called on labourers all over the world to strike on this day to fight for the eight-hour working day.

Ironically, over a century later workers in Hong Kong still cannot enjoy the benefit of an eight-hour standard working day nor a five-day working week. We have to work up to 50 hours a week on average which is the longest among developed economies. Without a cap on maximum working hours most are degraded to cheap labourers, forced to work over-time without reasonable pay.

Moreover, unlike other countries, those who are forced to long work hours and fall sick or even die suddenly, do not have the right to claim compensations from their employers. Yes, we have Statuary Minimum Wage since 2011 but it is shamefully low. It started at HK$28 an hour and even now it is only HK$34.5. Our disgraceful Statuary Minimum Wage was commenced on May the first, the very day we called the Labour’s day. How sarcastic!

Workers facing low income and long working hours find it hard to make ends meet. At the end, they are left with little else to save for retirement for themselves and their mates. The meager Mandatory Provident Fund offers little help. Once they step down from production lines they fall into poverty rapidly. Housewives excluded from the Fund are the poorest among the poor. Elderly women collecting card board paper on the street are daily reminders of their plight. There is no doubt that senior citizens in Hong Kong need Universal Provident Scheme. For the last five years I fought for this cause, filibustering in the Legislative Council. Year after year the Scheme was denied by the Government with “rubber stamps” in hand. In this month of May I must apologise for my failure.

In 2014 during the Umbrella Movement CY Leung said, Hong Kong cannot have universal suffrage. He said we must screen the candidates. If we allow low income voters, those monthly income lower than HK$14,000, to vote for CE there will be a policy bias towards the poor, he said.

I do not wonder why as a legislator I got thrown out every time I demonstrate to CEs. After all this is the last chapter of Animal Farm by George Orwell. Familiar?

Leung Kwok-hung is a legislator representing the New Territories East geographical constituency. This is his Letter to Hong Kong broadcast on RTHK 3 on May 5.