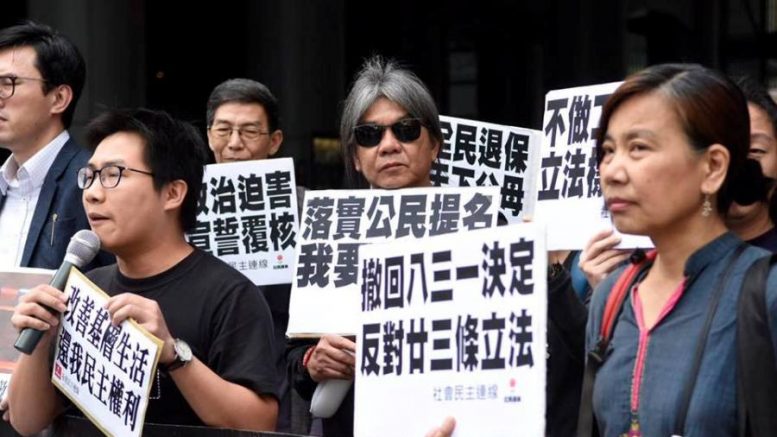 A group of pro-democracy activists lead a march calling for the withdrawal of NPC Standing Committee's 'August 31' decision on universal suffrage.

On December 29, 2007, disgraced chief executive Donald Tsang Yam-kuen was at a peak of his political career after being re-elected for a full five-year term. On what should have been a historic day, China’s top legislature gave the green light to electing the chief executive of Hong Kong by universal suffrage in 2017 and the Legislative Council thereafter.

The National People’s Congress Standing Committee passed unanimously a report submitted by Tsang on the city’s constitutional development a fortnight ago. The South China Morning Post said in a report headlined “Tsang’s 2020 Vision” the decision “has put an end to 20 years of contention over democratising Hong Kong.”

Tsang praised the decision as a “most important step for Hong Kong’s constitutional development” and said a “clear timetable” had effectively been set for returning all lawmakers by universal suffrage in 2020.

On March 26, 1,194 members of the Election Committee, most of whom Beijing-friendly, not the 3.77 million voters as envisaged in the 2007 NPC decision, cast their votes in the 2017 chief executive election. The “small-circle” election method has prevailed following the failure of a government attempt to seek a consensus on universal suffrage system in 2015.

On Saturday, Wang Zhenmin, head of the legal affairs department of the central government’s Liaison Office spoke against restarting political reform in the next five years. He argued that doing so would make it difficult for tackling other issues.

“(We) had pursued political reform for so many years. We’d changed nothing. We can’t spend the next five years on political reform. (We) won’t be able to solve housing problem, economic problem.

“(We) should think deeply about what is good for Hong Kong in the next five years, or even 20, 30 years,” he said at a seminar in Beijing.

In remarks that further dimmed the prospect of early universal suffrage, Wang, formerly head of Tsinghua University’s law school, cast doubts about the merits of universal suffrage. Citing some Middle East countries, he claimed the introduction of universals suffrage there has brought about civil war and chaos. “Do you really hope to see that in Hong Kong?”

Wang’s remarks are yet another sign of Beijing’s change of mind about its promise of universal suffrage in Hong Kong stipulated in the Basic Law promulgated in 1990 and a subsequent promise of a democracy timetable in 2007.

In 1990, the ruling Chinese Communist Party was confident of letting Hong Kong people elect their chief executive by “one person, one vote” in a gradual and steady process. A ten-year timetable of gradualist democracy was set out in the Basic Law starting from 1997, making 2007 as the earliest possible date for universal suffrage.

That the original target of 2007 was missed came as a disappointment and embarrassment. More importantly, the protracted row over universal suffrage has bred division and conflicts in the society and with the central government.

Back in 2007, Hong Kong was also troubled by a host of economic and livelihood problems. The world was not without failed democracies. Still, the then Beijing leadership saw the merits of a clear timetable in putting an end to the longstanding political dispute.

Events unfolded including the Occupy Central and elsewhere have apparently prompted a rethink in Beijing, judging from remarks made by Wang, who presumably reflects Beijing’s thinking.

Like governments in some other parts of the world, Beijing’s policy makers on Hong Kong issues have suffered from “short-termism” when it comes to the Hong Kong issue.

The symptoms of which include memory loss (about promises made), short-sightedness (in seeing the long-term benefits), lack of confidence (in tackling multiple tasks simultaneously) and paranoid ( about democracy causing chaos.)