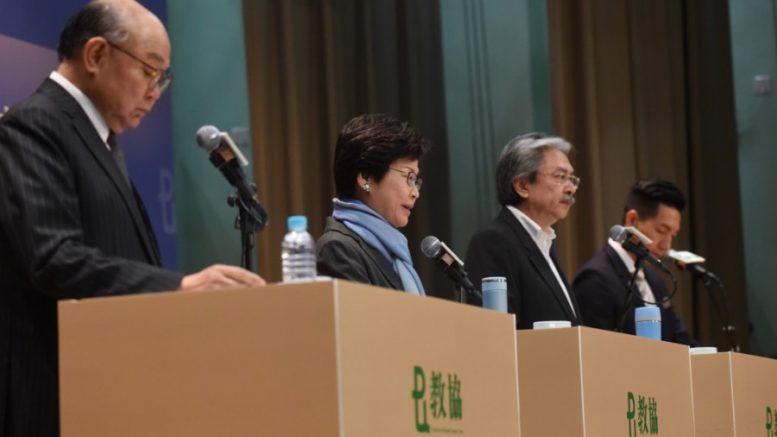 Three candidates vying for the post of chief executive attend a forum hosted by the Professional Teachers Union.

Perhaps inspired by the 21 straight wins of Hong Kong’s “magic kid” Rex Tso Sing-yu in the early hours of Sunday, John Tsang Chun-wah was an uncharacteristic fighter at the first all-three chief executive election forum in the afternoon.

Mr Tsang, known as a fencing player and a fan of the city’s hero fighter, hit hard at two vulnerable areas of Carrie Lam Cheng Yuet-ngor, namely her weakness in the sphere of social media and reluctance in reviving political reform after the 2014 electoral fiasco.

At the forum, he rebuked claims by his main rival that she was a victim of “white terror” on social media after she got into the ring. She lamented Josephine Siao, a Canto film household name, has also been vehemently attacked by netizens because she supported her candidacy. The Hong Kong society, Mrs Lam said, should not accept nor tolerate “such white terror.”

Responding to Mrs Lam’s claim, Tsang said: “Carrie, posts on the internet are not white terror. A lot of things happened recently. We know what they are all about. They are indeed white terror.

Though without specifying the “white terror,” Mr Tsang was clearly referring to the widely-known open secrets that the central government’s Liaison Office has pulled out all stops to garner support for Mrs Lam through hard lobbying, if not soft bullying, among the pro-establishment Election Committee members.

Making another hit at Mrs Lam, Mr Tsang ridiculed she would “of course not restart” political reform because she had already failed once. “Why she would like to fail again?” he said.

He reiterated his pledge in his election platform that he would re-launch political reform with no pre-set condition, referring to the National People’s Congress’ “August 31” decision on universal suffrage.

Speaking to reporters after the forum hosted by the Professional Teachers Union for education subsector members of the Election Committee, Mrs Lam said blaming the electoral reform failure on one person was not in conformity with team spirit.

Mrs Lam has been hailed by her former boss disgraced chief executive Donald Tsang Yam-kuen as a “good fighter”. She did show she can fight. Making indirect hits at the former financial secretary, she was critical of the government’s resource allocation policy, which had further strained the resources for education. She said: “It has to do with those who managed public finances.”

In another hit, she made veiled criticism against officials for curbing government spending even though the government has amassed massive reserves.

Defending criticism, Mr Tsang said he had provided resources to all spending plans proposed by the education officials.

He was hoping to convince critics against him for having blocked extra resources for areas badly needed for more money such as education were barking the wrong tree. Proposals for spending on education came from officials led by the relevant minister, who reports to both the Chief Secretary and the Chief Executive.

With the city’s reserves set to hit the one trillion Hong Kong dollar mark and the government’s Budget surpluses have been a source of “embarrassment,” Mrs Lam has sought to finger at Mr Tsang for his conservative public finance approach for the shortfall of resources for areas such as education. 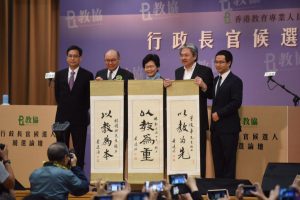 She has pledged to introduce a “new public finance approach” if she is elected. It remains unclear whether she will adhere to the principle of financial prudence and, if not, what the new approach is about.

If her hit at Tsang’s financial management appears to have missed, Tsang’s swift attack on her claim of “white terror” has been seen as a pointed strike at a weak point of her.

Worse, the fact she has inflated the alleged abuses of netizens against her and her supporters on social media has raised more questions about her understanding about the complexities of public opinion in the age of internet.

However unpalatable, provocative and offensive, the posts and emojis on the deeds and words of political and public figures on social media are the voices of citizens in the real world.

Like the self-made toilet paper saga and Octopus embarrassment, her self-invited fight-back against her claim of “white terror” has exposed her vulnerability to attack caused by a wide gap of understanding about the life of ordinary people.

Her grasp of details about a range of policies and public administration including the confusion about the role of education and welfare officials in education for people with special needs and resource allocation is no doubt impressive.

But her touch with the people and their daily life has proved to be more than an embarrassment but impediment of her governance if she succeeds Leung Chun-ying.

The third candidate is Woo Kwok-hing.

Be the first to comment on "Fighters Tsang, Lam trade hits, the winner is…"