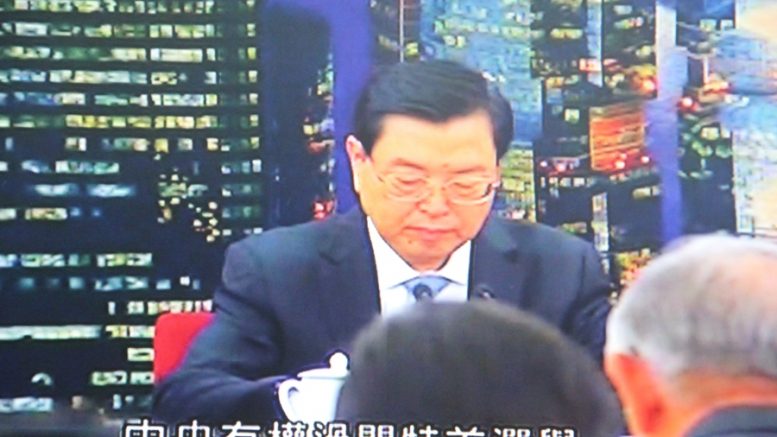 NPC chairman Zhang Dejiang drops more hints of Beijing's preference for Carrie Lam for the next chief executive at a meeting in Beijing.

In remarks made at a meeting with local deputies of the National People’s Congress (NPC) in Beijing on Monday, chairman Zhang Dejiang appears to have targeted at the alleged shortcomings of Mrs Lam’s main rival, John Tsang Chun-wah.

Again, he did not name Tsang.

Zhang emphasised that Beijing’s power of appointment of the chief executive was “substantive.”

Although the nature of such power was widely understood and has not been seriously challenged, the fact he highlighted it, at a time when the chief executive race entered a critical stage, was aimed to convey a message that Beijing’s nod to the elected candidate should not be given for granted.

His talk of “substantive power of appointment” is in line with remarks reportedly made by former chief executive Tung Chee-hwa and Mrs Lam about the election on separate closed door sessions.

Both reportedly said Beijing would not appoint the candidate elected on March 26 if they deem him or her not trustworthy. Both clarified their remarks later, but had not categorically denied having said so.

Speculation was rife that Tsang, who was the city’s financial secretary since 2005, did not have the full trust of Beijing. Beijing’s concerns have never been expressed in public. But he has been criticised, both publicly and in private, by pro-establishment figures for his laid-back work style and propensity to avoid politically-sensitive issues. 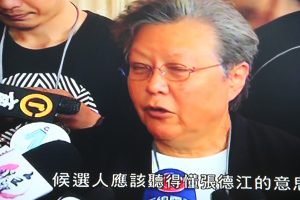 Tsang has rejected claims that Beijing did not trust him, saying he had been a principal official in various posts since 1999. He said he saw no reason why Beijing was distrustful of him.

In what could be interpreted as a rebuttal of Tsang’s argument, Zhang reported told the NPC delegates Beijing has set a higher demand for the chief executive, which was different from other principal officials.

CE must have ‘guts’, Zhang says

Zhang reportedly said the chief executive must “have guts to take on responsibilities and the ability to master complicated situations.”

Mrs Lam, who is known for her ability to fight tough battles, has been seen as the choice of Zhang, who is Number Three in the Communist Party’s Politburo Standing Committee. He is head of the ruling party’s policy group on Hong Kong and Macau affairs.

Zhang has travelled to Shenzhen last week to hold separate meetings with leaders of the city’s pro-Beijing, pro-establishment camp. During the meeting, he has reportedly said Mrs Lam was “the only candidate” whom Beijing backed.

Mrs Lam has submitted a total of 580 nominations to qualify for the election on March 26. A candidate needs at least 601 votes from the Election Committee to win the top post.

Of the more than 260 members who have not nominated anyone, more than 120 are seen as “iron-clad votes” because of their affiliations with the mainland authorities. They look certain to vote for Mrs Lam.

If any, an element of uncertainty is that a significant number of Election Committee members who have nominated Mrs Lam change their mind to vote for Tsang, or cast a blank vote at the secret balloting.

It is against the background of uncertainty about the voting that Zhang spoken in a less subtle manner their preference for Mrs Lam for the loyalists to deliver the results Beijing wants.

That Zhang is still eager not to give a clear blessing to Mrs Lam is aimed to avoid being criticised as Beijing anointing the next leader and that the ongoing election is a contested race.

Believe it or not.

Be the first to comment on "Zhang stops short of naming next CE, does he?"