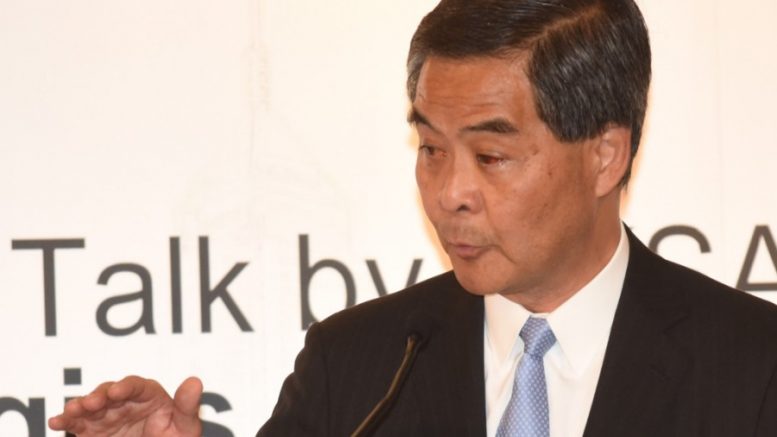 The ruling Chinese Communist Party is caught between a rock and a hard place in elevating the departing Chief Executive Leung Chun-ying to the top echelon of China’s national united front body.

Yesterday, the Standing Committee of the Chinese People’s Political Consultative Conference (CPPCC) approved with one dissenting vote and four abstentions the appointment of Leung to the national body. 275 said yes.

It seems certain he will be named as one of the vice-chairman of the CPPCC at the end of an upcoming plenum in Beijing. If so, he will follow the footsteps of the first chief executive Tung Chee-hwa, who was made a vice-chairman after he stood down in 2005.

It is widely understood that another former chief executive Donald Tsang Yam-kuen had also been offered a post of vice-chairman after he finished his term in 2012. He declined, apparently because of complaints against his misconduct during office. The rest is history.

Although an investigation into his HK$50 million deal with an Australian company UGL after his term expires by July cannot be ruled out, Leung remains clean until any guilt is established in courts.

Importantly, the central authorities spoke positively on the performance of Leung since he took the helm in 2012, at least in their official-speak. This is despite the widely-held view in the political circle ranging from the pro-establishment camp to the pan-democrat faction that he was given the marching order from Beijing. Or put more accurately, he was told not to seek re-election.

Elevating Leung to the top echelon of CPPCC will be the natural course of events in Beijing’s script. Any departure from the previous post-CE arrangements for Tung and Tsang will give rise to wild speculation. It will be seen as a piece of evidence that Leung was being axed.

His imminent new role, however, is still fraught with risk on various fronts.

First, the UGL case. It is intriguing that one CPPCC standing committee member had reportedly raised question about the case at yesterday’s meeting. The member was said to have expressed worries that Leung might fall from disgrace because of the row after he become a CPPCC vice-chairman.

Leung’s elevation to a statesman-level status may also bring about profound negative impacts on the governance of the next chief executive, which looks likely to be Carrie Lam Cheng Yuet-ngor, at least for now.

Given his personality and style, Leung may be even more active and visible than Tung in the Hong Kong political scene.

Following a long spell of silence on Hong Kong politics since 2005, Tung has become more active in the past few years with the setting up of a think-tank, Our Hong Kong Foundation. The Foundation has published regular reports of policy studies and recommendations.

He was said to have lobbied Mrs Lam to run for the chief executive soon after Leung announced his decision not to run. It is widely known that he has been active lobbying Election Committee members for them to back Mrs Lam.

Mindful of his unpopularity, Leung has exercised restraint not giving support to Mrs Lam publicly. But he has not been shy from firing salvos against her main rival, John Tsang Chun-wah, over his public housing plan. Leung did not name names.

Also mindful of the negative “Leung Chun-ying 2.0” political label, Mrs Lam has also clearly tried to keep a distance from her former boss and the so-called core “fans of Leung” in her election campaign.

Leung will remain a political liability for Mrs Lam if he continues to be an active player in the city’s political scene after she takes the helm, causing more uncertainties and troubles to her governance.