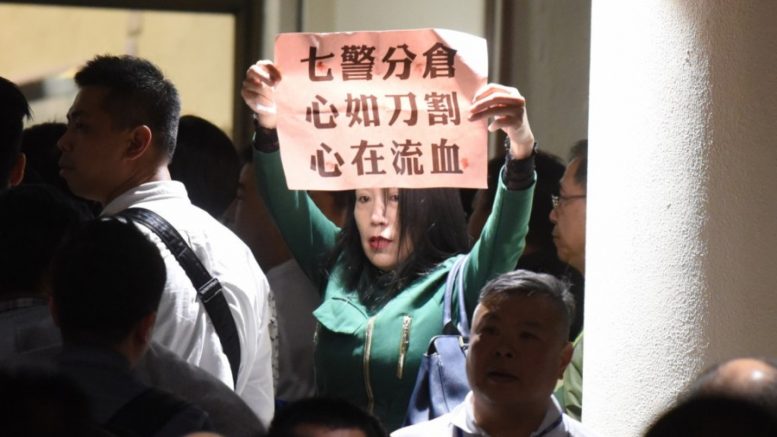 A woman lends her support to the seven police officers convicted of assaulting an activist during the Occupy Central movement at a rally on Wednesday.

Every time the Hong Kong Police holds a major press conference with something important to say, their spokespersons speak against a backdrop featuring their motto: Serve with Pride and Care.

Confronted with rising expectation in a profoundly-changing society, the police force has vowed to maintain law and order while upholding civil rights and striving for excellence in professionalism.

Those high-sounding promises, however, contrast oddly with the realities unfolded in the recent years, in particular the past week. That could not be more ironic.

On Wednesday night, more than 33,000 people, almost the same size of the entire fleet of the police force, attended a rally to support the seven police officers who were sentenced to two years in jail for assaulting activist Ken Tsang Kin-chiu. Among them are off-duty officers, their families and supporters.

They criticised the conviction and sentencing as unfair. Emotion ran high. At a high point of the rally, a leader of a police union led to crowd to chant a four-word Cantonese foul language. The video clipping was widely circulated on social media.

The show of force and anger by the police was rare in recent memory. It was reminiscence of a mass rally by police back in 1977 when they acted in defiance against a mass crackdown against graft by the Independent Commission Against Corruption.

Much has changed since then. The police force, which had been notorious for syndicated corruption in the 60s and 70s, has re-invented themselves to be a professional force. It won acclaim as Asia’s finest. 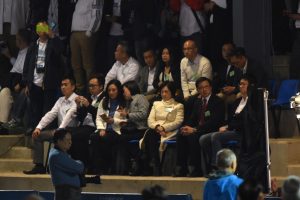 It has played a key role in upholding the city’s rule of law, law and order and civil rights and freedoms.

There have been increasing jitters about the loss of independence of the police force in the face of growing politicisation of the society. The assault case involved seven police officers during the Occupy Central movement and the way they reacted to the conviction last week have inflicted more damages to their image and public trust.

As the custodians of public order and rule of law, the accusation of political bias of the judge who handled the case and excessive attacks against the length of jail terms by leaders of police unions are disrespectful of and causing damages to the judicial system.

Serious questions have been raised among the populace about the sense of awareness of the police force about the rule of law and independent judiciary. Angry netizens lambasted the police for putting themselves above the law.

Law against insulting police a flashpoint

More worryingly, the brewing row over the case has prompted calls from police officers and their supporters for the introduction of a law to prohibit insults against the police.

With the police-people relations strained, the move to push for the new law is set to pour more oil to the fire.

Similarly, insensitive remarks made by community leaders about the seven officers could also send wrong messages to the society.

Take the case of the remarks made by Maria Tam Wai-chu, a local delegate of the National People’s Congress, at Wednesday’s rally. He told the crowd his friends in the banking sector have pledged to offer jobs to the seven convicted police officers.

However well-intentioned her remarks are, they could be interpreted as an endorsement of the unlawful acts of the seven officers if they fail to reverse the verdict in their appeals.

It risks sending a wrong message about right and wrong in the society.

True, the lingering political tension has put the police in a difficult and unenviable situation. But it is in times of adversity and tough challenge that the police force can show their mental strength and professional excellence.

It calls for leadership not just from within the police force but the government. As of last night, no top officials have come out to reaffirm the police’s commitment to serve with pride and care and the highest professional standards to protect the people and the systems.

The set of events has dimmed the shining face of the police force and cast a long shadow over the city’s stability in an eventful year.