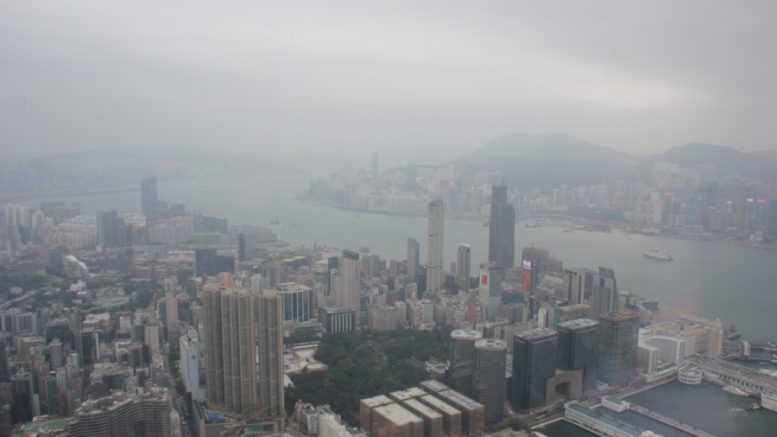 The front and back covers of the 2017 Policy Address feature the charm of Victoria Harbour. To borrow the words of its author Leung Chun-ying, it is “magnificent at day and radiant at night.” The view, he wrote, symbolised the achievements of Hong Kong.

Leung, the outgoing Chief Executive, may genuinely believe his record of governance in the past 54 months is shining and full of substance as figured in his 279-paragraph swansong policy blueprint delivered at the Legislative Council yesterday.

To many, the gloomy and misty scene of the city yesterday is a more befitting illustration of Hong Kong under the reign of Leung.

No wonder his departing words saying he will “continue to join hands with all 7 million Hong Kong people to make contributions to Hong Kong and our country” before he said “thank you” at the end of his address have caused a stir.

At the post-address press conference, he was asked to categorically rule out the possibility of seeking another attempt to vie for the top post five years later. He did not do so.

Under the Basic Law, there is no specific provision that bars any incumbent chief executive from running for the post again after he or she steps down. One provision says the chief executive can only serve continuously for a maximum of two terms of office.

Given his unpopularity and apparent loss of Beijing’s blessing, few seriously believe his political comeback is a real possibility.

That the question was raised and caused a disquiet in some quarters of the society reflects the depth of feeling of public discontent towards his leadership.

Against that background, his last policy address before his departure is an opportunity lost for him to reflect on the shortcomings of his governance, admit mistakes and seek the understanding of his fellow citizens.

Leung has decided not to play humbleness in his farewell address.

No humble pie in farewell speech

Instead, the policy address is long (it is indeed the longest speech in history) in details of the policies and measures by the government, but is blank when it comes to self-reflection on his political leadership and governance.

True, it is not fair to say the Leung administration has failed to get anything done on the policy fronts, in particular in areas such as poverty and elderly benefits. Nor it is fair to say his housing strategy is wrong simply because property prices are still going up and that flat size is getting smaller and smaller.

It cannot be wrong for the Government to boost land supply for housing. Citizens can be excused, however, for criticising the government for not having done a good job in increasing land supply.

People’s verdict on Leung’s economic and livelihood policies may be mixed, if not inclined to be largely positive. His record on promoting harmony within the society and between Hong Kong and the mainland is a total failure, nevertheless.

His failure to build a workable relationship with the pan-democrat opposition has, among other factors, resulted in the political reform fiasco. The setback in democratic election has, in turn, further poisoned his ties with the democrats and their supporters and the overall atmosphere of the society.

During his tenure, the relations between the government and the legislature have turned from strain and rivalry to tension and hostilities. The politicking in Legco has become an all-lose game, marred by farcical shows on a daily basis.

Both sides should take the blame. But as Executive Council convenor Lam Woon-kwong said in an interview with CitizenNews, government leaders have to take initiatives.

“Leaders should keep vigilance persistently and adopted an attitude of self-reflection. People do not trust us. You cannot always say they are wrong. You have to reflect whether you have not done good enough,” he said.

Lam said he hopes the next chief executive would take the initiative to rebuild mutual trust between government and people.

It is unclear whether the views of the senior member in Leung’s top advisory-cum-decision-making body have been conveyed to him when he penned his farewell speech.

If the answer is yes, his advice has fallen on deaf ears.