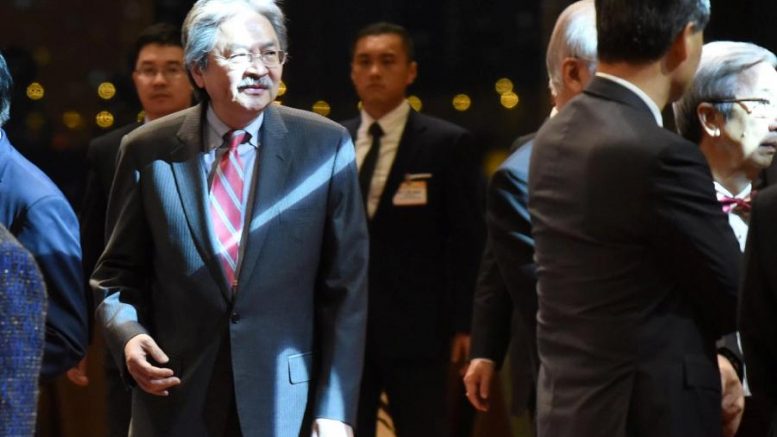 Chief Executive Leung Chun-ying and Financial Secretary John Tsang Chun-wah do not see eye to eye at a reception. They clash over whether to take questions from four lawmakers whose status is the subject of a judicial review filed by the Leung administration.

The race for the Hong Kong’s top job is getting nasty and ugly with the city’s top three officials locked in a clash over the legal status of four pan-democrat lawmakers whose oaths taken in October are the subject of a judicial review launched by the Government.

It led to an adjournment of the meeting. The society was shocked and awed by the intensified cabinet politics. The Government made a U-turn hours later and agreed to entertain all members’ questions.

As questions over the dramatic turnaround were yet to be answered, Chief Executive Leung Chun-ying yesterday accused Tsang of wrongly snubbing questions while distancing himself and other cabinet members from the financial chief’s remarks on Monday. He claimed they would have discussed it if Tsang had informed them of his statement at the Legco meeting in advance.

Leung did confirm, however, Tsang had obtained prior legal advice. And in a letter to Legco chairman Andrew Leung Kwan-yuen yesterday afternoon, Mrs Lam confirmed it was the government’s “consistent position” that officials would only answer questions raised by “such Legco members who have duly taken the Legco oath in accordance with the law.”

In the wake of the controversy at Monday’s meeting, she said officials would answer questions from all members – including “persons who purported to act as members” – in order to avoid unnecessary arguments and maintain smooth operation of the legislature.

If anything, Mrs Lam’s letter confirmed their refusal to recognise the status of the four lawmakers despite the fact that their judicial review against them has not even been granted leave by the court.

Guilty before a trial

In a clear departure from the principle of presumption of innocence, the Government has treated the four as being guilty even before the case is yet to be given a formal hearing, not to mention a verdict.

One key question remains unclear is whether Rimsky Yuen has specifically advised officials not to answer questions from the four. But based on Mrs Lam’s letter, the logical guess is that the original stance was not to take questions from “persons purported to act as members.”

If that is the case, it seems that it is the Chief Executive, not Tsang, who has gone too far. Leung said Tsang “should not have gone too far as not answering questions from the four lawmakers.”

It was not long ago that Leung has made veiled attack against Tsang for shirking responsibility.

In an article headlined “The buck stops here” on his website, Leung has apparently accused Tsang for failing to make difficult decision that might make people unhappy. Conversely, Leung claimed it took courage to be the bad guy, making unpopular but right decision.

His move to finger at his Number Three man for “going too far” flies in the face of his vow to take ultimate responsibility for government decisions.

The swift move by Leung to disassociate himself from Tsang’s remarks has ironically changed the political game. Harsh criticism against Tsang for having snubbed the four lawmakers on Monday turned into sympathy towards his precarious situation yesterday.

Being seen from the prism of conspiracy, Leung’s salvo against Tsang has been dubbed as cheap shots by him against his main rival in the upcoming chief executive election.

Admittedly, the image and popularity of Tsang will still be tarnished by the controversy. The way he handled the political dispute is not beyond doubt, both in terms of his motive and approach.

But the bigger losers will be Leung, Mrs Lam and Yuen. They face criticism for putting the imperative of political struggle against the pan-democrat lawmakers above the principle of common law and rule of law.

If they succeed, Hong Kong will be the biggest loser.